The Super Hero Edition of the popular Renault hatchback features logos and body graphics based on Marvel’s iconic superheroes! 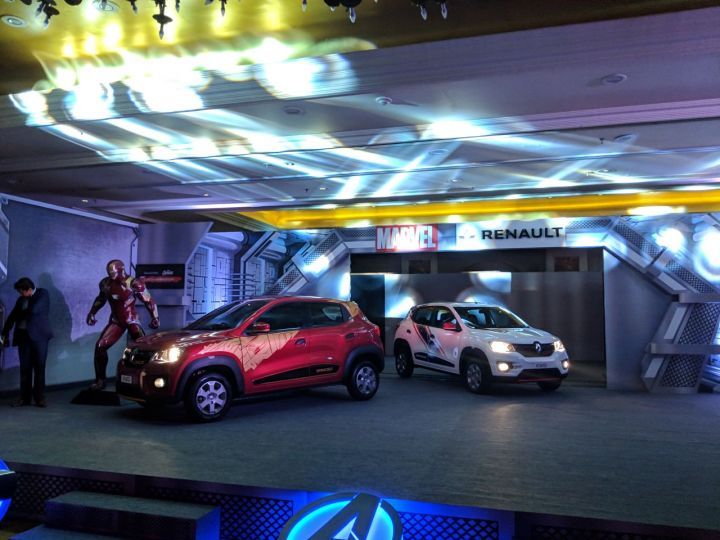 Renault today revealed the Super Hero Edition of its popular hatchback, the Kwid. The Kwid Iron Man and the Kwid Captain America are based on popular superheroes from the Marvel Universe and feature new exterior graphics, interior trim updates along with the steel wheels seen on the Kwid Climber. The Super Hero Edition is priced at Rs 29,900 over the top RXT Optional variant, which comes down to Rs 4.34 lakh (ex-showroom). The designs were created by Renault’s design studio in India in association with Marvel, which took about a year. The Super Hero Edition will be a limited run only and booking for the same can be made on Amazon with a token amount of Rs 9,999.

The Kwid Iron Man is finished in a red shade along with yellow graphics to mimic the costume of the superhero made famous by Robert Downey Jr. The yellow graphics run along the side, across the length of the car while the Iron Man mask finds a place on the bonnet and the arc reactor graphic on the boot. Even the skid plates are finished in yellow to match the overall theme. Additionally, one can even find the words ‘Invincible’ tattooed on the side cladding. On the inside, you get red accents on the dashboard, steering wheel and gear lever, and faux-leather upholstery on seats with the 'Avengers' insignia.

The Kwid Captain America, on the other hand, is finished in white and gets the Cap’s shield on the bonnet along with red and blue graphics along the body. This one too features the steel wheels from the Climber along with red contrast-coloured skid plates. The side cladding gets ‘Super Soldier’ stickers along with interior trim updates like blue accents around the centre comsole, steering wheel, the gear lever and the same seat covers as the Iron Man edition.

The special editions are based on the top RXT(O) and are available with both the 1.0-litre engine along with the 5-speed manual transmission as standard. Buyers can even opt for Renault’s Easy-R AMT. The top-spec version continues to sport features such as a 7.0-inch touchscreen, manual air-conditioning and front two power windows.

The Kwid Marvel editions are aimed at a younger set of buyers who are fans of Iron Man and Captain America. These special editions are offered as dealer-level fitments and will be available from today onwards at an expected price of Rs 4.3 lakh onwards. Expect Renault to showcase both versions of the hatchback at the upcoming Auto Expo 2018. It rivals the Maruti Suzuki Alto siblings, the Datsun redi-Go and the Hyundai Eon.