Porsche 718 Gets The GTS Treatment 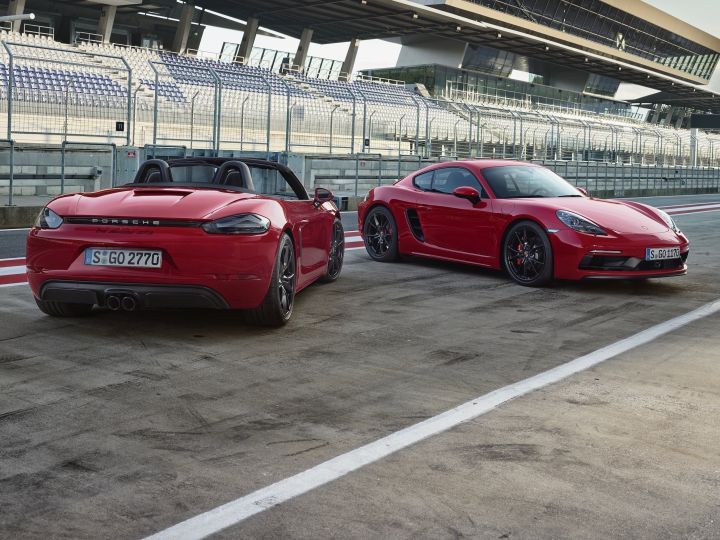 The Porsche 718 Boxster and Cayman have received a new GTS variant in their respective lineup. While this badge brings with it some subtle cosmetic changes, it also adds more power to the mix as well. It even gets some features which are otherwise optional on the regular variants. Deliveries in Europe will begin from mid-December and expect the GTS twins to arrive in India early next year. Here’s a list of what the GTS tag brings to the table.

Although the GTS version of both the Boxster and Cayman use the same 2.5-litre, flat-four engine as before, they now get a redesigned intake duct and a retuned turbocharger for better performance. The GTS versions of both sports cars now produce 365PS of power and 430Nm of peak torque, which is 15PS more than the 718 S variant and 35PS more than the naturally-aspirated, flat-six engine from the last-gen model. The GTS comes with two transmission options - a 6-speed manual or the 7-speed Porsche Doppelkupplung (PDK) dual-clutch automatic. With the auto box, the GTS models sprint from 0 to 100kmph in 4.1 seconds and have a limited top speed of 290kmph.

A new apron at the front, blacked out bi-xenon headlights and taillights, all black logos, black rear apron and centrally-positioned tailpipes finished in black help the GTS versions stand apart from the regular models. The black fest continues with black GTS logos at the base of the doors and 20-inch wheels painted in, you guessed it, black!

On the inside, you get Alcantara sports seats that can be electrically adjusted in two ways. The seats also feature the GTS logos on the headrests. Even the steering wheel, centre console and armrests are wrapped in Alcantara. You also get a stopwatch mounted in the centre of the dashboard, which is otherwise an option called the Sport Chrono Package on the regular models.

Other than the stopwatch to measure lap times, you also get the Porsche Torque Vectoring (PTV) system with a mechanical rear differential lock and Porsche Active Suspension Management as standard. The latter lets you drop the car by 10mm. The GTS models will also let the driver record, display and analyse driving data on their smartphone by using the Porsche Track Precision App.