OMG! This Ford Endeavour Looks Ready To Take On An Apocalypse! 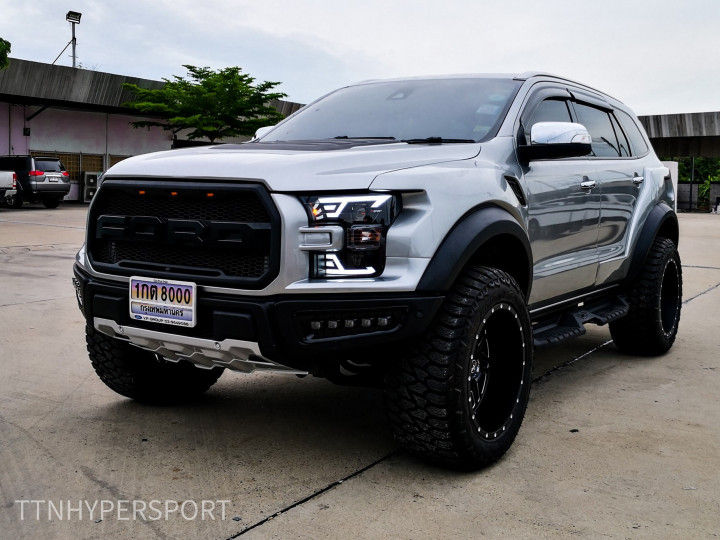 Ford pickup trucks with the Raptor DNA pack tough-as-nails looks and enhanced off-road chops. One such truck is the sexy Ranger Raptor that shares most of its underpinnings with the Endeavour. Now, some of you may have thought why the Endeavour doesn’t get the Raptor treatment?

The answer is simple. The Endeavour simply doesn’t sell as much as the Ranger and it doesn’t make sense for Ford to develop a tough Raptor variant of the SUV. This prompted TTN Hypersport, a garage in Thailand, to build an extreme-spec Endeavour Raptor that looks similar to the brute F-150 Raptor. Before we jump into the details, have a long stare at the image below:

Looks sexy, doesn’t it! The Endy that’s parked next to this beast looks tame in comparison. So what has TTN Hypersport done with this Endeavour Raptor? For starters, the ride has been jacked up and the big wheel arches have been neatly filled with large off-road spec alloy wheels and tyres. Those XXL-sized wheel arches, which does justice to its macho stance, is built out of polycarbonate and fiberglass. And we must admit that the finish is impeccable and seems straight out of Ford Motor Company’s assembly line!

Now to the main bit - the front-end. You’ll be puzzled when you view it head-on as it looks exactly like the Ford F150 Raptor! That’s a huge compliment considering the firm decided to use aftermarket parts rather than importing the original Raptor kit due to the costs involved. The attention to detail is spot on, with elements like the three marker lamps on the grille being carried over to this beast as well.

Now to the best part. If you reside in Thailand and own an Endy, you can transform it into this beast quite easily. You can choose your favourite colour for the body and the brake callipers as well as pick alloy wheels of your choice too! That’s insane. We hope to see something similar to this roaming the streets of India soon.