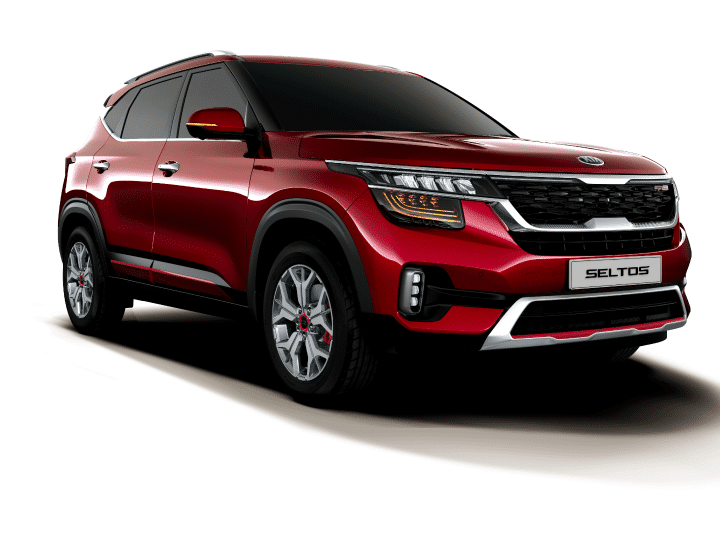 Kia has officially unveiled its much-awaited Seltos SUV, with the launch expected to happen in September this year. The SUV comes with two petrol and one diesel engine options along with a total of  four transmission options! Kia is pitching the Seltos as a premium SUV and it will take the fight to the Hyundai Creta, Renault Captur, Nissan Kicks, MG Hector as well as the Tata Harrier.

The Seltos retains most of the styling elements from the SP Signature concept, and the result is a premium and stylish looking SUV. The most prominent styling element has to be the signature Kia tiger nose grille with sleek LED headlamps. Two LED strips extend towards the centre of the grille from the edges, giving it a futuristic look. Unique elements inside the headlamp itself make it look stylish. Chrome has been tastefully used all over the SUV, lending it an upmarket feel. A rugged looking skid plate, coupled with the LED fog lamps also adds to the character of the SUV. In profile, the dual-tone roof and the side glass which gets a sharp rake after the C-pillar, stand out. It also gets 17-inch diamond cut alloy wheels, but only in the top-spec variant. There is also a neat chrome insert in the quarter panel that also extends to the rear windshield. The LED tail lamps connected by a chrome strip at the rear also look tasteful. Kia is offering the Seltos in eight colour schemes and five dual-tone paint options.

Powering the Seltos will be a 1.4-litre Turbo GDI petrol engine along with a set of 1.5-litre petrol and diesel engines. All three engines are BS6-compliant. Kia is also offering four transmission options, unlike any other car in the Indian market. These include a 6-speed manual, 7-speed DCT, 6-speed Torque Converter and a CVT. There will also be three driving modes on offer, Eco, Normal and Sport along with three terrain modes, Wet, Mud and Sand. The Seltos, in a nutshell, brings an extensive list of engine-transmission combinations which will appeal to a wide set of audience.

The following are the different engine-transmission combinations in detail:

The SUV also gets the much talked about connected features, similar to BlueLink in the Hyundai Venue. Dubbed the UVO connect, it offers a plethora of connected features with highlights including AI voice command, stolen vehicle tracking, auto collision notification, SOS emergency assistance, remote engine start and stop, and others. While Kia has not revealed the variant wise details for the Seltos, it has announced that the top-end GT line will be offered in India. It will boast the Turbo GDI engine and will come loaded with all the features.

It also packs six airbags, ABS, ESC, vehicle stability management (VSM), traction control, brake-assist system, hill start assist control among others. The most attractive feature of it all has to be the premium 8-speaker Bose sound system, which was previously reserved for luxury cars.

Being the first product from the Korean brand, the Seltos will also be responsible for Kia’s initial perception among Indian consumers. The Seltos looks set to create some ripples in the segment and we expect it to be priced aggressively as Kia has heavily localised it. The Indian-made Seltos SUV will also be exported to the Middle East, Africa, Latin America, and Asia. The Korean brand has also said that it will start off its operations with 265 touch points across 160 cities in India. When launched, expect the Seltos to be priced from Rs 10 lakh to Rs 16 lakh (ex-showroom pan-India).

Is Kia Motors Working On A Cleaner Seltos...