The Seltos is expected to be launched by September this year 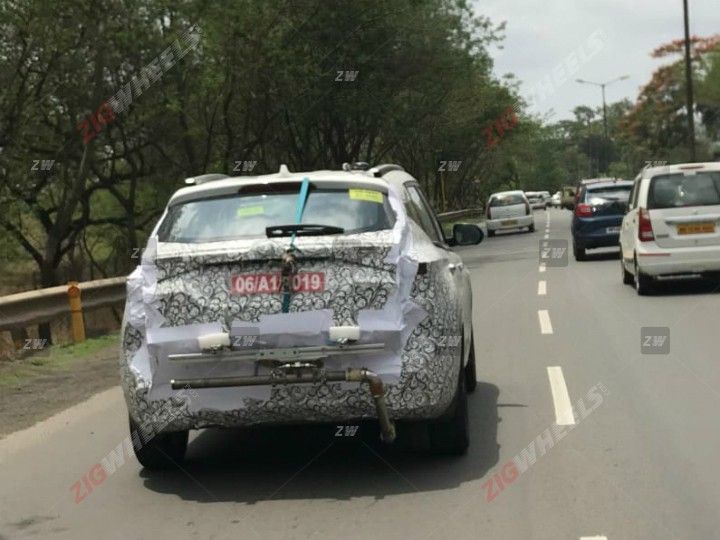 UPDATE: The Kia Seltos has been finally unveiled in India. Head here for more information about the SUV.

Kia is all set to make its debut in India with the launch of the Seltos compact SUV. Set to be unveiled in June, the Seltos is expected to make its way here by September this year. Over the last few weeks, Kia has been releasing teasers and sketches of the SUV, giving us an idea of what to expect from the Hyundai Creta rival.

Now, the Seltos has been spied testing on our roads again with emission testing equipment connected to its tail pipe. Kia is likely to have been testing the new 1.5-litre petrol and diesel engines that are set to power the final production version for BS6 compliance. Nothing much can be made out due to the heavy camouflage, but one can see the dual-tone, machine-finished alloy wheels and the LED DRLs in action. Kia’s signature tiger nose can also be spotted, albeit heavily covered up. The SUV was also spied inside out sans camouflage during its commercial shoot abroad, and images of the interiors were also leaked at a later stage.

The Seltos will be based on a new platform which will also underpin the upcoming 2020 Hyundai Creta. The Seltos’ 1.5-litre petrol and diesel motors will be offered with both manual and automatic gearbox options.

Recent spy images show an all-black cabin with wood inserts and brushed aluminum accents. Expect the Seltos to come loaded with features, including a 10.25-inch floating infotainment system that supports Android Auto and Apple CarPlay along with a premium Bose sound system. Other features that are set to be offered include cruise control, automatic climate control, Kia’s Sound Mood lighting and a host of connected car features like the Hyundai Venue’s Blue Link.

Expected to be priced between Rs 10 lakh to Rs 16 lakh (ex-showroom), the Kia Seltos will compete with the Hyundai Creta, Renault Captur, Nissan Kicks, Tata Harrier and the Maruti Suzuki S-Cross in the compact SUV segment.