Could the SV650 be the perfect canvas for future custom builders? 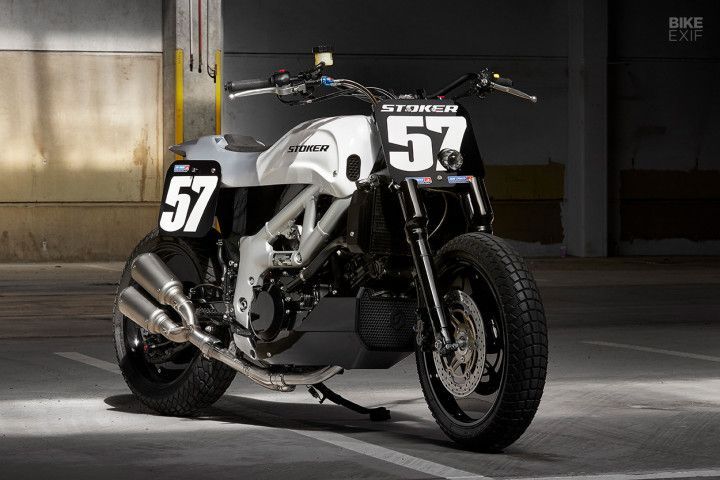 Suzuki’s only other street naked in the mid-displacement segment is the SV650 -- a bike that’s been around for over 20 years. It's reliable, fun and inexpensive, but isn't a canvas one would generally choose to carry out a custom build, according to Finnish Automotive designer, Antti Eloheimo.

Antti designed and built this one-off SV650 Tracker as a daily rider which he could use to kick up some dirt every now and then. What really stands out though, is the bike’s minimalistic styling and stance.

The fuel tank, for instance, isn’t all new. It’s the same OEM fuel tank that’s been repurposed and cleverly modified to make more room for the airbox to breathe. It’s positioned lower and sits under a tracker-style body. The ingenious two-tone paint scheme makes it look like a two part design, when in reality it’s a single unit.

Antti also incorporated a pair of 3D-printed intakes in the fuel tank that helps direct airflow to the engine, with additional channels running through the tailpiece. The tailpiece uses an aluminium blank-off plate to keep the muck off the repackaged electronics. The rear engine cylinder and the retooled subframe, on the other hand, are neatly concealed behind a pair of aluminium side panels.

But the toughest aspect of the design had to be the curve leading from the top of the tank to the tail section. Antti said it had to be as shallow as possible without raising the seat height too much. This is crucial as street trackers require riders to be able to scoot forward to keep the front tire loaded into corners, and have room to move back on the straights.

The seat is made from a slim foam pad that flows into one of the sleekest tail sections with a small street legal LED tail light. An aluminium belly pan with a 3D-printed grille is a nifty addition that’s been designed to protect the front spark plug from dust and debris from the front tyre. Same goes for the radiator cover.

The racing number boards are custom made but can be removed if required. Illumination is covered by a projector positioned on the front board, with Motogadget turn signals and a Motogadget speedo. Finishing touches include a pair of titanium exhausts connected to the headers via custom-made Y-connectors.

What remains unchanged are the SV’s 17-inch wheels. The only aesthetic upgrade is the added wheel covers with Michelin supermoto tires. The stock front forks have been lowered and upgraded with new internals and preload adjusters. The rear shock has been sourced from a Kawasaki ZX-10R which makes the bike now sit a couple of inches lower than before.

Everything’s been properly thought out. I’d even go as far as calling it one of the best-looking trackers I’ve come across and would love to see more custom builders use the SV650 as their platform of choice.