Analysis: Does Switching To EVs In India Really Save The Environment?

Ather Energy’s Impact Report gives us interesting insights on how emissions are reduced with EV usage, even with a charging infrastructure depending on non-renewable resources 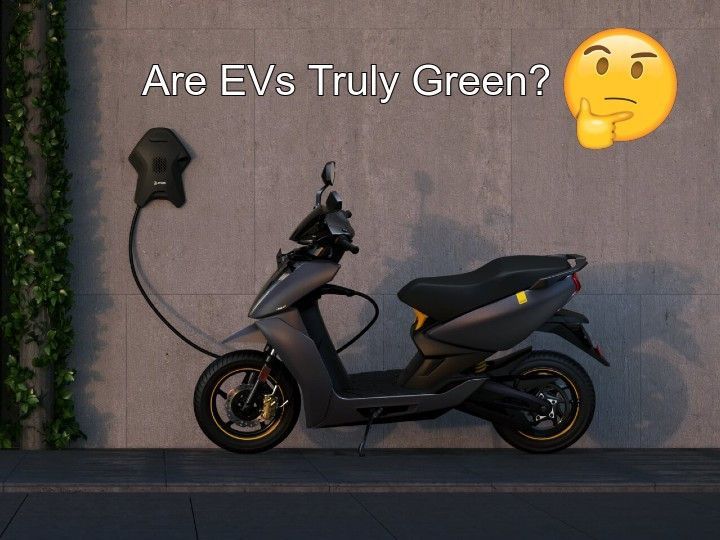 Ather Energy recently shared its Impact Report, framed in conjunction with Aspire Impact - a Gurugram-based company that measures how an organisation makes a positive impact on the society, environment, and quantifies how sustainable it is. Ather scored 2.5 out of 4.

The scoring in this first-of-its-kind report in India sheds light on how Ather Energy has managed to make a positive impact on four broad categories: Product (Design, Reliability, Efficiency, Safety), People (Employees and Customer community), Planet (Factory, Organisation, Use of Electric Vehicles), and Policy (Gender Equality, Work, and Economic Growth).

That said, many of us believe electric vehicles are truly green only if they are recharged with electricity made using sustainable power sources. But is it really the case? We analyse:

How ‘Green’ Are These Numbers?

Ather’s CEO Tarun Mehta says, “This accounts for electricity that’s available in India on an average, which is roughly about 70 percent thermal powerplant (sources), so roughly about 70 percent coal. It does account for that. But despite accounting for it, given the extremely high efficiencies of a central powerplant, and the fact that 30 percent of it is already renewable, and extremely high efficiencies of electric powertrain, you still come out far better. You don’t need to be using solar panels of your own to truly offset CO2 by using an EV. Even using the standard electricity as is, you offset a considerable amount of CO2.”

So, it goes without saying that while EVs are still green enough, one can achieve even cleaner emissions if charging sources use solar or other renewable forms of technology.

But Are The Battery Packs Truly Green?

Short answer: Only to a certain extent. Long answer: Lithium is extracted from hard rock mines, and also from saline-rich areas such as brine pools and deposits, and mineral springs. But mining lithium is a several month-long complicated process involving evaporation and precipitation, not to mention incredibly huge amounts of water. It is reported that to extract one ton of lithium, one would require around 18.92 lakh litres of water. This also comes at the cost of water pollution, including surface water contamination and damage to the ecosystem and the landscape.

Ather sources its battery cells from South Korea, which is pretty much the only component in the Ather 450X coming from outside of India. As per the company’s policy, the batteries will be replaced once they hit 70 percent of their original capacity. That said, none of their batteries have reached that level so far as Ather’s electric scooters are still fairly new in their lifecycle.

But once used batteries start coming back in the next 2-3 years, Ather plans to use them for energy storage solutions, which is currently in the testing phase. The company has done five pilot runs testing power backup at homes and one pilot project of a diesel generator replacement, as per the Impact Report.

And now with the Impact Report, Tarun feels that these aspects can be quantified and tracked as effectively as business-oriented financial numbers. So, to increase the score, recycling batteries could be one of the efficient ways.

What About The Manufacturing Plant?

Ather’s latest manufacturing plant in Hosur, Tamil Nadu, is built as a PEB structure (Pre-Engineered Building), ensuring minimum pollution, reducing material usage, logistics, and keeping construction costs in check. Also, instead of a central air-conditioning system, the plant uses High Velocity Low Speed (HVLS) Fans, a fancy term for giant ceiling fans, for the assembly line. Having said that, the battery assembly section is sealed off with its own air-conditioning system as it demands the need for a dust-free environment.

There’s also an in-house sewage treatment plant of 38.5 KLD (Kilo Litres per Day) capacity, helping to recycle on average 28 KLD. The recycled water is utilised for watering the garden belt and toilet flushes. The wastewater from vehicle washing can be recycled through a sand bed filter system. All these aspects indirectly contribute to curbing CO2 emissions. Additionally, Ather also plans to install solar panels in FY 2022 in an attempt to tap 80 percent of its energy consumption through solar power.

All these initiatives, coupled with tail-pipe emission-free running of EVs, should go a long way in reducing greenhouse gas emissions compared to petrol-powered two-wheelers. That said, vehicles can be truly green only if the lithium in the battery sources are mined sustainably or if the power source itself evolves into something more sustainable. For this, certain companies are experimenting with hydrogen fuel cells, among other battery chemistries. One such manufacturer has come up with a scooter, and you can read more about it here.