The 2020 Skoda Octavia Unveils On Nov 11, But We Already Have All The Details

The 2020 Skoda Octavia is bigger, packs in more tech, and is greener than the model it replaces 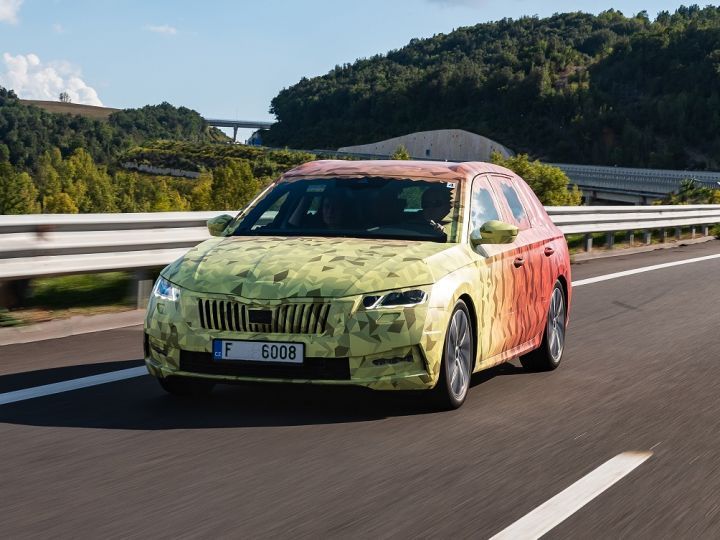 The 2020 Skoda Octavia is slated for a global reveal on November 11. However, it has been spied testing multiple times and by now we have seen nearly every nook and corner of the sedan. If you’re that Skoda fanboy who wants to know everything about the upcoming sedan ahead of its debut, we have some good news. Skoda has officially revealed all the details of the 2020 Octavia. It is larger, sports meaner styling, and comes with a plethora of engine options. Internationally, it will be offered in either the notchback or estate body style. But for India, the Octavia will come in the notchback form and is expected to be showcased at the Auto Expo 2020, with a launch later in the year. It is one of the five models Skoda Auto India will launch in the country by 2021. Here’s all you need to know about the upcoming Honda Civic and Hyundai Elantra rival:

The 2020 Octavia is 19mm longer and 15mm wider than the existing model. However, the current model has a 2mm longer wheelbase. Despite that, Skoda claims that the 2020 Octavia will have 78mm more knee room. It also packs in a slightly larger boot.

We already had an idea about the design of the 2020 Octavia thanks to an almost undisguised spyshot. To give you a quick recap, the existing model’s split-LED headlamps have been replaced by sleek single-piece units that now have Matrix LED lights. Skoda’s trademark butterfly has grown bigger and the new front bumper comes with LED fog lamps. In profile, it comes with a pronounced character line while you can opt for alloy wheels with sizes ranging from 17 inches to 19 inches. At the rear, the 2020 Octavia comes with split-LED headlamps, all-LED units, and a redesigned tailgate, which tops the look.

Inside, the 2020 Octavia comes with a restyled interior. You get a new two-spoke steering wheel and a digital instrument display behind it. The central console is dominated by a 10-inch infotainment system that controls both the infotainment and climate control duties while the conventional gear level for the DSG variants has been replaced by an aircraft-style toggle switch that relies on sensors for choosing the modes.

The 2020 Octavia comes loaded to the gills with features. Highlights include connected-car tech, a head-up display, Smartlink+, Android Auto and Apple CarPlay, a Canton sound system, dual-zone climate control as well as a sunroof. It also gets some nifty driver assistance systems such as collision avoidance assist, exit warning (blind spot detection) and fatigue warning. The last feature can also bring the car to a halt and will call the emergency department in case of any untoward incident.

The 2020 Skoda Octavia is available with a plethora of TDI EVO and TSI engine options. Petrol engine options are the 1.0-TSI, 1.5-TSI and the 2.0-TSI with power outputs ranging from 110PS to 190PS. The first two motors also come with a 48v mild-hybrid system for additional torque boost if opted with the 7-speed DSG. Meanwhile, the 2.0-litre TSI motor packs in an all-wheel-drive system. The TDI EVO engine range consists of a sole 2.0-litre TDI motor in three states of tune: 115PS, 150PS and 200PS. The EVO tag for this engine means that is Euro 6d compliant, which is more stringent than BS6 emission norms.

As speculated earlier, the Skoda Octavia is also offered with the PHEV powertrain from the Skoda Superb iV. It utilises a 1.4-litre TSI motor that comes mated to an all-electric motor, which is available in two states of tune—204PS and 245PS—and is offered only with a 6-speed DSG. For India, the Octavia is expected to come with 1.5-litre TSI and 2.0-litre TDI EVO engines, both developing 150PS.

And before we forget, the next-gen model’s sporty RS and hardcore Scout variants will join the lineup later. Excited?

The next-gen Octavia is expected to be showcased at the 2020 Auto Expo and could be launched by the end of 2020. Considering the number of updates, expect it to be priced more than the current model, which starts at Rs 16 lakh (ex-showroom pan India). When launched, the 2020 Octavia will rekindle its rivalry with the Honda Civic, Toyota Corolla Altis and Hyundai Elantra.