Design sketch shows interior layout, which will be split into several levels with inspiration from the Skoda grille 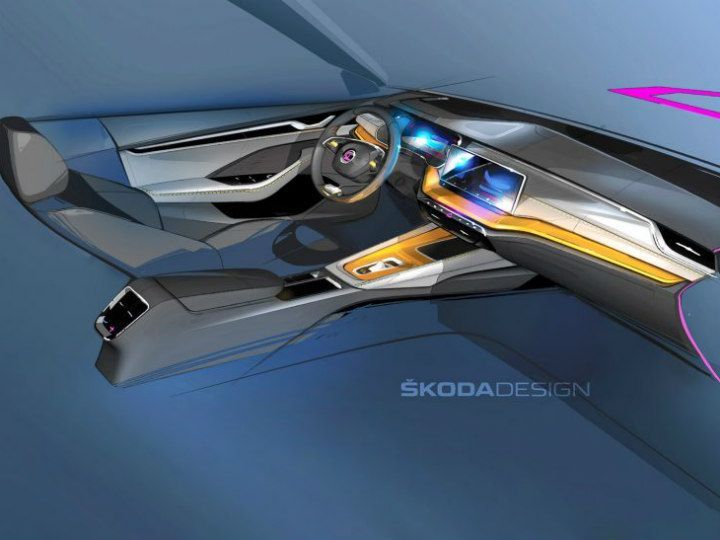 We’re only four days away from the official reveal of the 2020 Skoda Octavia and we’ve already seen nearly every nook and cranny of the sedan with multiple spy shots of both the sedan and wagon body styles. Skoda themselves have also teased design sketches and a teaser video on the upcoming sedan. The carmaker has now revealed another design sketch of the Octavia’s interior layout. It is expected to make its India debut at the 2020 Auto Expo with a launch later in the year.

Even before the sketches were released, we already had an idea of what’s inside through earlier spy images. We know that it will get a new floating infotainment system, two-spoke steering wheel, virtual cockpit and toggle switches for various controls. The design sketch teased by Skoda gives us a better view of the Octavia’s interior layout. Its newly shaped dashboard will be split into several levels with its styling bits taking characteristics of the Skoda radiator grille. Expected features include a 10-inch infotainment system, Smartlink+, Android Auto and Apple CarPlay, dual-zone climate control, sunroof, connected car tech and other driver assistance features.

Previously leaked images reveal that the 2020 Octavia will replace the split-LED headlamps from its existing model and will now get sleek single-piece units with Matrix LED lights. The Skoda butterfly is bigger with a revised front bumper and LED fog lamps. Alloy wheels will be offered in sizes ranging from 17 inches to 19 inches. Highlights at the rear include split-LED headlamps and a redesigned tailgate. It will also come with a wagon body style, which is unlikely to make it to India.

The current-gen Octavia is priced from Rs 16 lakh to Rs 26 lakh (ex-showroom). Expect the 2020 Octavia to come at a premium over its predecessor owing to the upgrades. Once launched, expect the new Octavia to take on the likes of the Honda Civic, Toyota Corolla Altis and Hyundai Elantra.