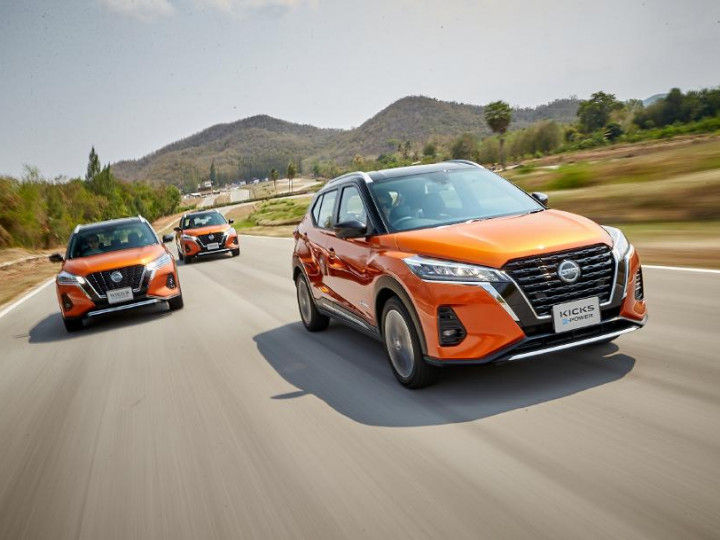 Nissan has launched the facelifted 2020 Kicks in Thailand with prices starting from 8,89,000 Thai Baht (Rs 21.04 lakh). The Thai-spec Kicks not only gets a sharper design but also a hybrid powertrain dubbed ‘e-Power’.

The ‘e-Power’ hybrid powertrain consists of a 1.2-litre 3-cylinder petrol engine coupled to an electric motor powered by a 1.57kWh battery pack. The combined output stands at 129PS and 260Nm. Four driving modes are on offer:  Normal, Sport, Eco and EV. Power is sent to the front wheels via the electric motor while the petrol motor acts as a generator to charge the batteries. Nissan has also the new Kicks with its intelligent accelerator technology which debuted in the Leaf. It allows the driver to accelerate, decelerate and stop the vehicle using just the accelerator pedal.

There are a host of cosmetic updates too. It’s easy to tell the new one apart courtesy the large honeycomb mesh grille, which gets a chrome surround that merges with the sleek LED headlamps. Also new are the aggressively styled bumpers and fog lamp housing. In profile, the only change is the new alloy wheels while updates at the rear-end are limited to a new bumper.

On the inside, it gets a dashboard that’s completely different compared to what we get in India. Features include an 8-inch infotainment system, a semi-digital instrument cluster, Nissan’s connected car technology, smartphone connectivity, climate control, cruise control, keyless entry with push button start and a host of driver assist features such as forward collision warning, emergency brake assist and blind spot warning. On the safety front, it comes with six airbags, ABS with EBD and a 360-degree camera.

So, will India get this version of the Kicks? Highly unlikely as the Thai-spec Kicks is based on the global V platform while the India-spec model is based on the cost-effective (read: old) Renault Duster’s B0 platform. That said, we could expect it to feature similar cosmetic updates in the near future. Nissan is also gearing up to launch the BS6-compliant Kicks in India. You can read more about it here.