First announced as the IMx concept in 2017, the Ariya EV was revealed in Japan with the choice of a 65kWh or a 90kWh battery pack 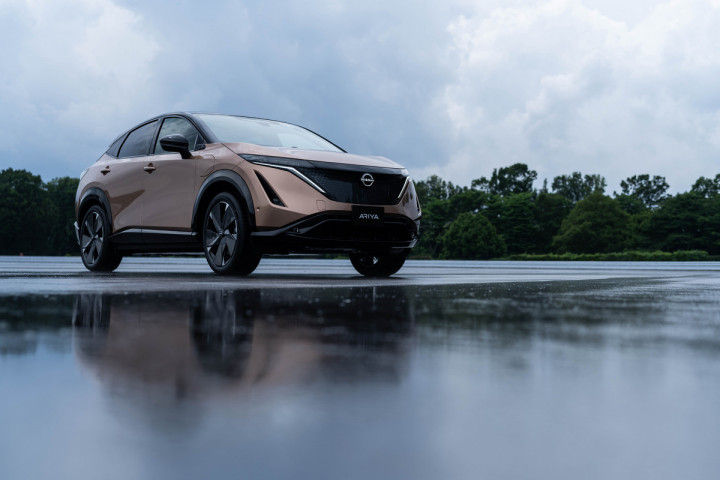 Nissan has kept the entire world waiting for another electric vehicle ever since the success of its Leaf EV and it seems like the prayers have been answered. After a decade-long solo run by the Leaf nameplate, the Japanese carmaker has finally revealed the Ariya EV crossover coupe in its full glory. Introduced as the IMx concept in 2017, the Ariya EV’s journey to production is almost complete with only final changes due to homologation still pending.

The front gets a new ‘shield’ design with a smooth surface underlined by a 3D kumiko pattern. It stands on 19-inch or 20-inch wheels and has a low swooping coupe roofline. The Nissan logo will be backlit by 20 LEDs if the market allows it, of course. The rear features a one-piece bar of light.

Ever wondered what you would see if you travelled through time into the future? Just step inside the Ariya EV. The conventional buttons have mostly been replaced by haptic-feedback switches under the dashboard surface and the design of the interior itself is minimalistic, to say the least. The Ariya EV gets a 12.3-inch touchscreen infotainment system and a similarly sized digital HUD, with the main highlight being the Zero Gravity seats.

The Ariya EV comes loaded with technology. At the forefront is Nissan’s ProPILOT 2.0, an upgraded version of the Leaf EV’s ProPILOT. The ProPILOT is an advanced driver assistance system which enhances the driver’s control over the vehicle by assisting with steering, acceleration and braking. The 2.0 version of this technology will come with voice control and mobile phone control. Besides, the Ariya gets a Driver Monitoring System, intelligent cruise control, and ProPILOT Park. It will also get three drive modes: Standard, Sport, and Eco, with an additional Snow mode for the e-4orce powered models.

Promising a future without range anxiety, the Ariya EV is available with a couple of battery options in rear-driving single-motor and 4WD twin-motor e-4orce models. The smallest member is the 65kWh battery pack which produces 218PS and 300Nm in its single-motor form, providing a range of up to 450 km. The bigger 90kWh will provide 242PS and 300Nm to the rear wheels, at a whopping range of almost 610km. Both these powertrains have a top speed of 160kmph.

Now to bring in the big guns, descended from the GT-R itself. The Ariya EV will come with twin-motor versions of the two battery options with four-wheel drive, dubbed the e-4orce powertrains, with a system which employs regenerative rear-motor braking. The 65kWh e-4orce puts out 340PS and 560Nm with a maximum range of 430km. The 90kWh e-4orce produces 394PS and 600Nm while providing an approximate 580km range with the capability to go from 0-100 kmph in just 5.1 seconds! Both the e-4orce powered Ariyas will have a top speed of 200kmph.

While markets around the world are excited to see a new EV from Nissan after the introduction of the Leaf EV, the Indian market won't feel the same. Plans for the Leaf EV hitting Indian shores were in the works but never really materialised. While there is no official announcement yet, Nissan might just make its EV debut in India with the Ariya EV. It would be a sign of progress of Nissan’s AMI plans for electrification, and a successful one at that considering our love for SUVs.