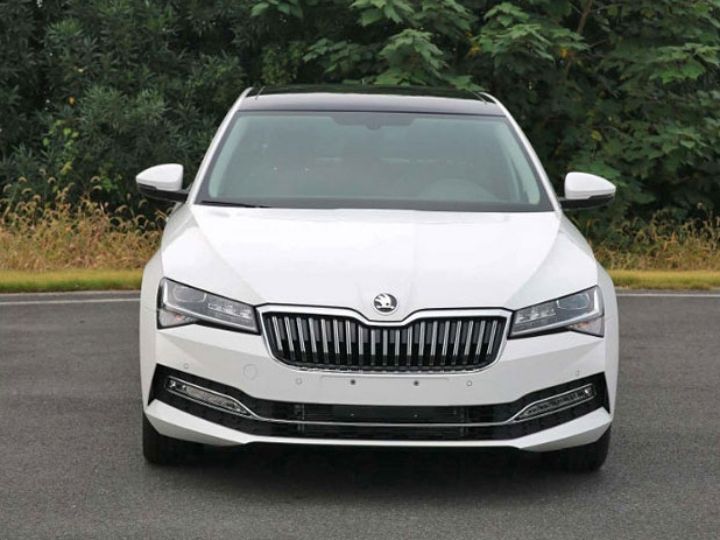 Fresh pictures of the India-bound Superb facelift have emerged online that show the full-size sedan in all its glory. The car in question is the Chinese-spec Superb, but we’re expecting a similar update to make its way to India as well. So what’s different?

Starting with the face, you’d note that the grille is now wider and larger. Dunked in chrome, the grille makes the Superb’s face look statelier. The headlamps aren’t as sleek and sharp as they used to be. It now has a rounded rectangular-ish shape that we’ve seen on the Karoq. But much like the current Superb, there’s a kink at the end. It’s interesting to note that the Superb facelift will get an LED-projector headlamp setup as opposed to the current bi-xenons.

From the side, there’s practically no give that the car is new in any way. There are new alloy wheel designs here, but nothing much else. Over to the rear, the revised bumper gets our attention immediately. There’s a matte black insert that helps cut the visual bulk, with reflectors placed smartly on top. On the boot, we see the new ‘S K O D A’ badging instead of the insignia, something we first saw on the Skoda Scala. The tail lamps too are now sharper and are expected to feature dynamic turn indicator. Finally, there’s a chrome strip that connects the tail lamps, making the rear appear wider.

There’s no glimpse into the interior yet. But we don’t expect a major change here. For India, the Superb facelift is likely to feature the 12.3-inch Virtual Cockpit all-digital instrument cluster. Notably, both the Octavia and the Kodiaq now sport this feature. Skoda could play around with the interior trims to make it look fresher. Don’t expect any difference in terms of space or boot space, though.

Skoda India might launch the Superb facelift in India by the end of this year. Since changes are mostly cosmetic, we’re expecting prices to remain relatively unchanged at Rs 25 lakh to Rs 33.5 lakh (ex-showroom).