What is the Skoda Scala? Where does it fit into Skoda’s global scheme of things and most importantly, does it actually hold any significance to India? 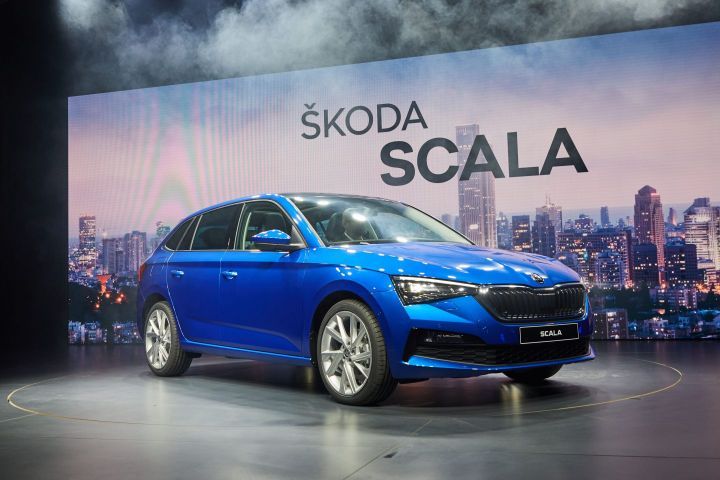 It’s a word that describes the Skoda Scala accurately. To begin with, the global premiere wasn’t held in Europe like most Skoda debuts are. Instead, the compact car was revealed in Israel, a market where Skoda is currently the highest selling European car brand. It’s also a country that, for all its geopolitical challenges, has emerged as a global hub for start-ups, particularly those engaged in automotive tech. That latter half does explain why Skoda chose Tel Aviv for the reveal, as the Scala itself plays host to a long list of gizmos (more on that later).

What makes the Scala unusual in the Indian context is its size. It is a compact car but not in the sub-4 metre sense. In fact, measuring 4362mm in length, it’s nearly as long as mid-sized sedans like the Skoda Rapid or VW Vento. And with a 2649mm wheelbase, there’s more between the axles than the aforementioned sedans!

Quirky as the Scala may be conceptually, in design it works excellently. Due credit to Skoda for keeping the look largely similar to the Vision RS concept car. It’s a hatchback, but the sloping roofline adds a hint of coupe while the way the body extends beyond the rear doors makes it look like a chop-sized estate car. Coupled with the 18-inch alloys, the sharp lines that’ve become synonymous with Skodas since the Superb and the crystal effect for the exterior lights, the Scala seems like something that’d appeal to everyone from boy racers to their mothers.

The cabin space, by Skoda’s claims, manages to equal or better the Octavia on some counts. We’d have to run a back-to-back test to attest to that but from experience, there is enough room for four adults to fit in comfortably. Yep, six footers, but again, strictly four. Interestingly, the use of glass area is quite heavy. There’s a panoramic glass roof that extends into the rear windshield all the way into the tail lights, in effect, making the entire roof and part of the tail gate seem like a single piece. This makes the cabin feel big, even when the interior’s draped entirely in black.

Pop open the powered tail gate and you get 467 litres of boot space, expandable to 1410 litres with the 60:40 split rear backrest folded down. The basics for a practical family car are ticked and then comes the tech to package it all in modernity. Both, the head and tail lights get LEDs with dynamic rear turn indicators too.

Step inside to find a dashboard that’s woven around a new 9.2-inch touchscreen infotainment system that’s as fluid to use as the current 8-inch units seen in cars like the Kodiaq. Android Auto, Apple CarPlay and MirrorLink are a given of course, but the infotainment package also includes an optional 10.25-inch virtual cockpit in place of a traditional instrument cluster. The screen gets five different views and aside from car information can even display the navigation feed, so it falls into the driver’s line of vision with more ease.

This display also shows the status of the adaptive cruise control, which functions at speeds of upto 210kmph. The safety package is on par with Rs 60 lakh luxury cars and includes up to 9 airbags, lane assist, front assist (auto braking), side assist (akin to blind spot detection but said to have a longer field of view), rear traffic assist and hands-free park.

Available engine options include a 1.0 litre TSI in two tunes - 95PS or 115PS, a 1.6 litre, 115PS diesel and a 90PS CNG. The range-topping 1.5 TSI petrol, though, is what is quite the talking point. Producing 150PS and 250Nm, this motor comes with cylinder deactivation, shutting two of its four cylinders under light load. Available with a 6-speed manual gearbox as standard, it’s also offered with a 7-speed DSG and it’s this powertrain combination that brings us to business - what does the Scala mean for India?

Skoda India is only considering it at the moment with no launch plans carved in stone. If brought here, it will not be a volume player, possibly coming in through the CKD route. That also opens up the possibility of Skoda choosing the range-topping petrol DSG, since they’d be catering to a niche audience, who’d be willing to pay upwards of Rs 12 lakh for what is technically a compact hatchback. This could be a move to get up a segment, rather than compete in the Baleno/Jazz/i20 space, where Skoda is already on the backfoot.

That aside, design cues from the Skoda Scala are indicative of what we can expect from Skoda’s new Creta/Captur rivaling compact SUV set to arrive in 2020.