BREAKING: This Is The Most Powerful 125cc Scooter On Sale In India

The NTorq Race XP is also the first Indian scooter to get riding modes! 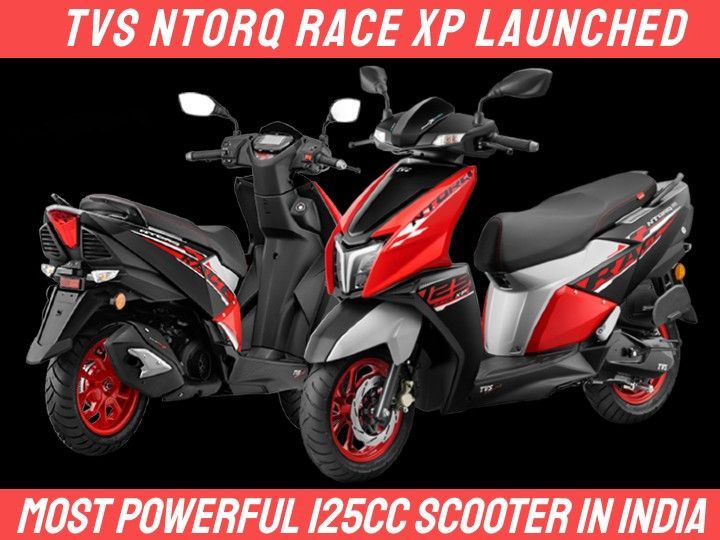 TVS Motors has taken the wraps off the NTorq 125 Race XP, the sportiest edition of the NTorq yet. The new top-spec variant of the NTorq packs some interesting features to help it achieve that title.

The Hosur-based bikemaker has priced the NTorq Race XP at Rs 83,275 (ex-showroom Delhi), making it Rs 4,900 and Rs 12,200 dearer than the Race Edition and the STD NTorq respectively.

At this price, the NTorq Race XP rivals the Suzuki Burgman Street and Honda Grazia, none of which matches its sporty quotient.

With the addition of the XP, the NTorq now comes in five variants: Drum, Disc, Race Edition, Super Squad, and Race XP.

The most noticeable change for the NTorq Race XP is its new livery, blending white, grey and red elements. The sporty red shade dominates the livery, in fact, even the alloys come in the same shade. It may seem a tad overdone to some, but it’ll surely stand out in a crowd.

Ensuring the ‘Race’ in the title isn’t a gimmick, TVS has tweaked the engine internals to improve combustion. Thanks to these tweaks, its BS6-compliant 125cc single-cylinder motor now churns out 10.2PS and 10.8Nm, 0.8PS and 0.3Nm more than the other variants.

Lately, TVS has become synonymous with ride modes and they’ve now made their way to the NTorq too. This makes it the first ICE scooter in India to feature ride modes. The Race XP gets Race and Street mode to help riders squeeze out that extra power and reach a top speed of 98kmph, according to the manufacturer.

Also new for the Race XP are voice-assisted features, a first for 125cc scooters in India. This new feature covers various functions such as mode change, navigation, console brightness adjustment, and DnD mode. The system supports as many as 15 voice commands.

Apart from the addition of these new features, the Ntorq continues to get a fully digital instrument cluster with vast functionality thanks to the app connectivity. It also comes with a full-LED headlamp, alloy wheels, a USB port, a boot light, and an external fuel filler cap.

The Race XP retains the same underpinnings, riding on a telescopic fork and hydraulic rear shocks. A combined braking system that couples the front and rear brakes also comes standard.

We feel the new livery is TVS’ attempt to set a new benchmark in the 125cc segment and judging from the spec sheet, the brand has done pretty well. How well these new features work and how joyous the bump in power makes the NTorq is something we can’t wait to find out. Stay tuned to this space for updates.