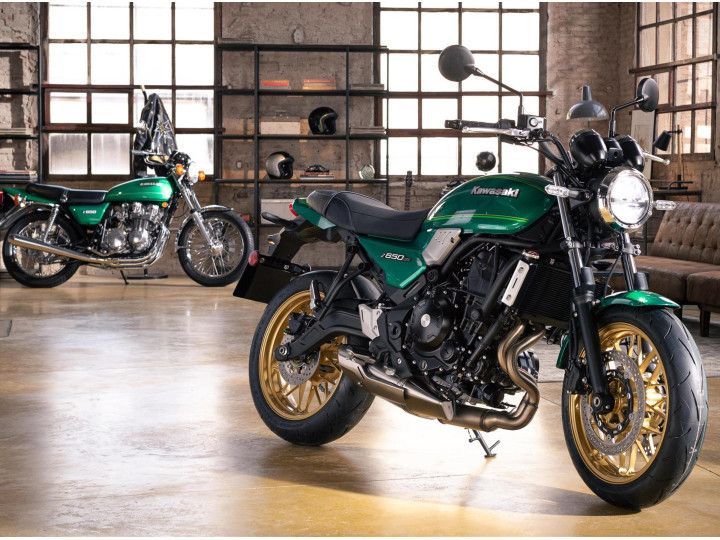 Kawasaki has just pulled the wraps off its latest neo-retro motorcycle, the Z650RS, and we have every reason to be excited about this bike, for it will grace the Indian shores later this year.

The Kawasaki Z650RS is a modern-day rendition of the iconic Kawasaki Z650-B1 from the 1970s. For starters, the Candy Emerald Green paint job is very similar to the original Z650. Kawasaki already had the correct formula for a charming retro-themed motorcycle with the Z900RS, and they have perfected it on its smaller sibling.

The Z650RS has the right blend of neoteric and retro elements. For example, while Team Green has given the bike an old-school circular headlamp, it houses a modern LED setup. Then comes the twin-pod instrument console, which flaunts analog needles as expected from a bike of this genre, but also features a LCD inlay. Even the gold alloy rims are designed to evoke the charm of wire-spoke wheels. However, as much as we love the way the Kawasaki Z650RS looks, having a side-mounted exhaust, rather than the same underbelly unit from the Z650, would have added quite a bit more to its retro charm.

Underneath all this charming old-school garb is the same 649cc, liquid-cooled parallel-twin engine from the Kawasaki Z650 and the Ninja 650. In this case, it has been revised for better low- and mid-range response, but without compromising on its top-end capabilities. That said, it produces the same 68PS and 64Nm as its naked and sports tourer sibling.

Kawasaki hasn’t fiddled with the underpinnings either. The Z650RS retains the trellis frame from its naked sibling, and even the 41mm telescopic fork and the horizontally-mounted link-type suspension. While the brakes are the same size as those on the standard Z650 (twin 300mm front discs and a single 220mm rear disc), the Z650RS get regular round rotors, not petal discs.

The Kawasaki Z650RS will go on sale in November 2021 in many markets, including India. It has been priced at GBP 7549 ( Rs 7.63 lakh approx) for the all-black version, while the Metallic Moondust and Candy Emerald Green will set you back by GBP 7699 (roughly Rs 7.78 lakh). In India, it is likely to be priced around the Rs 7.50 lakh (on-road) mark, and will offer an affordable alternative to the British neo-retro roadster, the Triumph Street Twin.