Royal Enfield Meteor 350: All You Need To Know 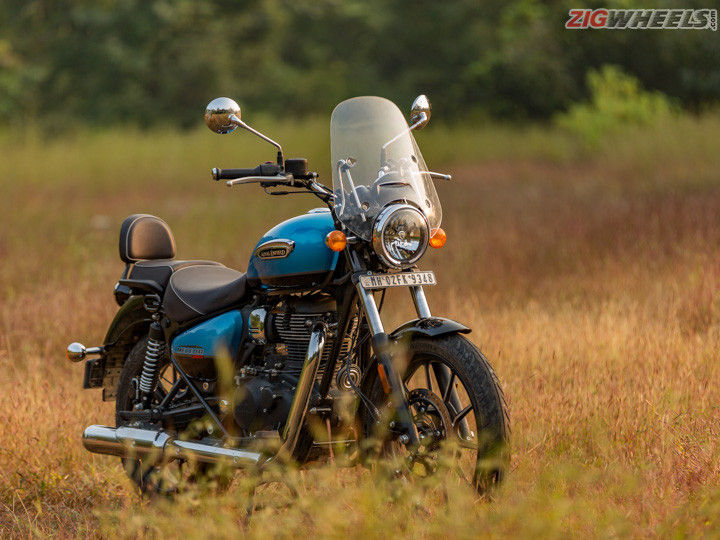 After months of speculating and waiting, Royal Enfield has finally pulled the wraps off the Meteor 350. The bike is based on the brand’s new J Platform and replaces the Thunderbird 350. Here’s all you need to know about the latest cruiser to roll out from Madras.

With the Meteor 350, the styling has definitely evolved but the slightly tall front-end, round headlamp, the pear-shaped tank and the low seat are very much similar to the Thunderbird 350X. The base variant gets a blacked-out theme with a colour-coded fuel tank and sticker rims. The Stellar variant gets creature comfort like cushioned backrest along with some chrome treatment. The Meteor 350 Supernova variant boasts of a larger flyscreen, premium seats and a dual-tone paintjob, in addition to what the Stellar offers. If that doesn’t suffice, Royal Enfield is offering as many as 35 accessories, including eight different exhausts and seat options for the Meteor 350.

The Meteor 350 uses a new double downtube split cradle frame. One of the biggest highlights of the bike is its weight-191kg, which is down by six kg compared to the predecessor. A major factor here is the use of a 15-litre tank, compared to the Thunderbird’s 20-litre tank. Unlike the older Thunderbird, the mudguard, centre panel and even the fuel tank cap is made of plastic to save weight.

Heart of the matter

The Meteor 350 gets a brand-new air-cooled 349cc engine that produces 20.4PS and 27Nm. While the numbers are similar to the UCE counterpart, the addition of a counterbalancer and the company’s decision to ditch the primary chain drive and pushrods has resulted in a refined engine. The motor is highly tractable too, allowing you to cruise in the 4th cog at as low as 30kmph. The engine’s highway manners are commendable too, allowing you to stay all day in the 90-100kmph range. In fact, even if you stretch to 110kmph, the engine doesn’t run out of steam.

The cruiser now sports a bigger 300mm front brake and a 270mm disc at the rear, aided by dul-channel ABS. The suspension duties are carried out by 41mm telescopic suspension at the front, offering 130mm travel and twin shocks at the rear. The seat height is accessible at 765mm, and you can drop it further by 20mm with the low seat option.

The Meteor 350 is the first Royal Enfield product to roll out with turn-by-turn navigation. Called Tripper, the secondary display pod pairs with your phone to show minimalist navigation instructions and time. The primary display is loaded too, with an analogue speedometer and a digital inset that displays time, fuel indicator, pear position, Eco mode, trip and odo readings. RE has also equipped the bike with a USB port on the handlebar to charge your phone on the go.

To the showroom then?

The Royal Enfield Meteor 350 comes not in one but three variants-- Fireball, Stellar, and Supernova. Like with other products, RE is offering three years warranty and 1-year roadside assistance as standard. The Meteor 350 goes up against the Honda H’Ness CB350, Jawa Perak, and the sporty Bajaj Dominar 400.