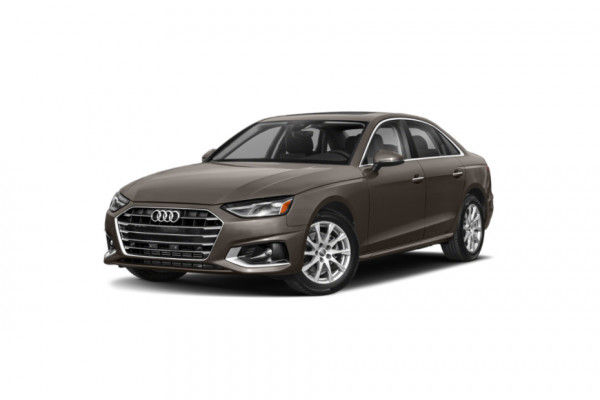 Audi A4 is a 5 seater convertible car available at a price range of Rs. 42.34 Lakh to 46.67 Lakh in India. It is available in 2 variants and 5 colours. Audi A4 comes with BS6 compliant petrol engine only. The petrol engine of A4 is a 1998cc unit which generates a power of 187.74bhp and a torque of 320nm. The A4 is available only with an automatic transmission.

Ask your question from A4 owners and experts
Your Question should contain at least 5 characters Submit Cancel
Available EMI Options
Rs. 91,005 per month @ 10.5% Apply for Loan

Audi India has launched the facelifted 2021 A4 luxury sedan in the country at Rs 42.34 lakh to Rs 46.67 lakh. The A4 is powered by a 2.0-litre TFSI turbo-petrol and offered in two variants. It adds features such as connected Audi’s latest MMI touch-controlled infotainment system, LED headlamps, gesture-controlled boot opening, and wireless charging.

Audi’s entry-level luxury sedan, the A4 is locally manufactured in India at Skoda Auto Volkswagen India’s Aurangabad facility. It will rival the Mercedes-Benz C-class, BMW 3-Series, Jaguar XE, and the upcoming Volvo S60.

Audi offers the A4 with a 2.0-litre TFSI turbo-petrol engine that develops 190PS of power and 320Nm of torque. It is coupled to a 7-speed dual-clutch transmission through which power is transmitted to the front wheels. It gets an additional mild-hybrid system that helps in torque assist. The sedan is capable of doing the 0-100kmph sprint in 7.3 seconds, before hitting its top speed of 241kmph. It has a claimed fuel efficiency of 17.42kmpl.

The A4 is offered in two variants: Technology and Premium Plus. Both variants come with the sole 2.0-litre TFSI turbo-petrol engine. The sedan is offered in five colours: Ibis White, Floret Silver, Mythos Black, Navara Blue and Terra Grey, along with two interior upholstery trims: Atlas Beige and Okapi Brown.

The Audi A4 takes on the likes of the Mercedes-Benz C-class, BMW 3-Series, Jaguar XE, and the upcoming Volvo S60.

Must Read Questions & Answers Before Buying A4

What is the price of Audi A4 Top Variant?

What is the EMI of Audi A4 in Delhi?

What are the top competitors of Audi A4?

The top 3 competitors of Audi A4 are BMW 3 Series, Mercedes-Benz C-Class and Jaguar XE.

What are the best financing options for Audi A4?

A4 Price in India