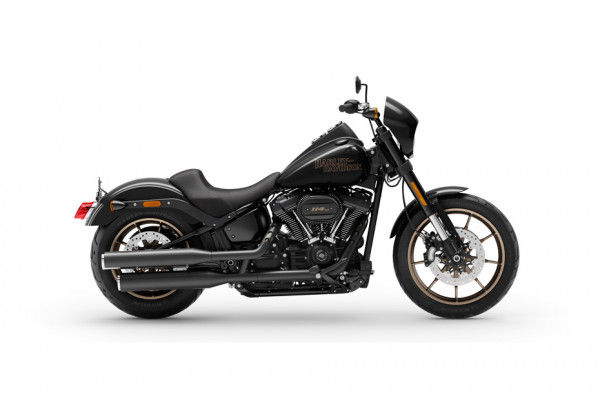 Harley-Davidson and Hero MotoCorp have entered a joint venture which will allow Hero to sell and service Harley motorcycles in India. Hero will also develop and sell premium motorcycles under the Harley-Davidson brand. Know more details here.

This being an S model in Harley’s lineup, it gets the larger Milwaukee-Eight 114 engine. The 1,868cc V-twin motor churns out 155Nm, 10Nm more than the smaller 107ci (1,745cc) unit found on the Low Rider. There are no electronic rider aids to speak of. The Softail family had undergone a major revamp for the 2018 model year. The double-cradle chassis was lighter, stiffer, and had better cornering dynamics. While the chassis remains the same across the board, the Low Rider S gets a USD fork from the Fat Bob and not the telescopic unit from the Low Rider. The swingarm and underseat preload-adjustable monoshock too are set up for a sportier riding experience. The 19-/16-inch alloy wheel setup remains the same as on the standard bike but you do get twin disc brakes on the front wheel. Each one of these rotors gets a four-potter to bring this heavyweight to a grinding halt. At the rear is a smaller disc with a twin-piston caliper floating caliper. Dual-channel ABS comes as standard.

Inspired by the American TV show, The Sons Of Anarchy, the Low Rider S gets blacked-out overalls. There are a few bronzed elements on the motorcycle, bringing out its bareknuckle character. The body panels of the Low Rider S remain the same with the only different styling item being the round black bikini fairing. You also get a silver colour option but that does not bring out the brawler vibe of the motorcycle.

The motorcycle features vertically stacked twin-pod analogue clusters. The top one gets a digital inset, which has a trip meter, odometer, fuel level indicator, range indicator, and gear position indicator. The speedometer is analogue here. The lower roundel is an analogue tachometer. You get LED illumination bits all round the Low Rider S. The tail light has a smoke-finished cover as standard while you can get the same smoked lenses for the turn indicators from the vast Harley-Davidson accessories catalogue.

There are no direct rivals to the Harley-Davidson Low Rider S in India. The Indian Chief Dark Horse is the only motorcycle with similar engine specs but it is more laidback in nature.

What is the price of Harley-Davidson Low Rider S?

Does the Harley-Davidson Low Rider S have ABS?

What is the EMI of Harley-Davidson Low Rider S in Delhi?

What are the colours available in Harley-Davidson Low Rider S?