Can the new Bajaj V15 which has been positioned by Bajaj as a premium commuter bike upstage the premium variant of the highest selling 125cc motorcycle in India? 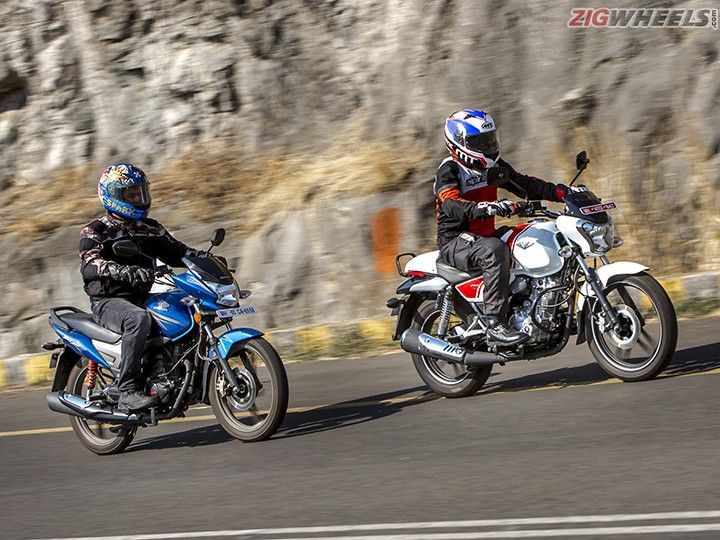 When you think of a commuter motorcycle, one pictures an underpowered, highly fuel efficient, unappealing motorcycle. But gladly that has changed in the recent past with consumers wanting a more visually appealing yet highly frugal motorcycle as their daily transport. A particular manufacturer that has been focusing on premium products in the commuter segment is Honda, they launched the Livo last year which is positioned as a premium 110cc commuter offering and on the same lines the Honda CB Shine SP was introduced. We recently rode the Honda CB Shine SP (Review link) and adjudged it as among the best 125cc bike on sale currently. While Honda is providing a premium offering based on its existing portfolio, Bajaj Auto has completely different strategy. It introduced a new brand in its line-up by launching the new V15. According to Bajaj, in the form of the V15 they are offering a 150cc motorcycle for a price of a 125cc bike, doesn’t that sound interesting? So let put this two new offerings and find out which one makes a better buy.

The Honda CB Shine SP as the name suggests is based on its popular 125cc sibling which is also the highest selling motorcycle for Honda in India. Styling wasn’t its forte and that is where the CB Shine SP comes in picture, the sculpted bikini fairing, snazzy graphics and dual-tone finish centre panel give the bike a more pleasing styling. The overall design of the Honda CB Shine SP is sporty yet conventional something that will be appreciated by executives and mature riders.

The Bajaj V15 on the other hand is completely different in its design approach which can be a bit confusing to say the least. The Bajaj V15 is an uncanny combination of a commuter bike and a cafe racer. Apart from the trapezoidal headlamp, the above design somehow manages to work in a strange manner. The styling of the Bajaj V15 cannot be termed as pretty, but it seems to have clicked among the masses as wherever we went people gave the bike a second glance and intrigued looks. The rear section of the motorcycle is well proportioned with a contrast coloured grab handle, stubby muffler and the petite LED tail lamp unit. The most interesting detail on the bikes is the fuel filler cap with the INS Vikrant logo which is a neat touch.

The Honda CB Shine SP gets a semi-digital console which is easier to read on the go and also looks better executed than the analogue unit on the Bajaj V15. Switch gear quality on the Honda offering is disappointing while that on the V15 is of better quality. Build quality of both the bikes is decent, with the Honda feeling marginally better put together. The grab handle on the CB Shine SP has been coated in a soft-touch PVC material which makes it more comfortable to hold  and it also gets the benefit of CBS (combined braking system).The Bajaj offering gets equipped with a 60W headlight which the manufacturer claims to be the brightest in the segment. Optional extras on the Bajaj motorcycle include the rear seat cowl, larger grab rail and crash guard which cost Rs 999. The cowl can be removed easily with the help of an allen key that has been cleverly embedded into the key fob.

One look at the spec sheet and you will conclude that the Bajaj V15 is faster than the Honda CB Shine SP. And there is good reasoning for that, the 149.5cc displacement motor pushes out 12PS at 7,500rpm and 13Nm of torque at 5,500rpm. The Honda CB Shine SP on the other hand generates 10.7PS at 7,500rpm and 10.3Nm of peak torque at 5,500rpm from its 125cc heart. But numbers really don’t tell you the real story as we found out when we took both the machines on the highway.

Open the throttle and it’s the Honda that starts to gather momentum faster and keeps on maintaining its lead till both the machines run out of breath. The V15’s performance is disappointing for its displacement as it struggled to reach triple digit speeds whereas the extra gear in the CB Shine SP proved its worth in holding speeds at the top-end and one can easily cruise at speeds around 80kmph. The only aspect where the Bajaj offering is better is the mid-range owing to higher torque rating and also it has throaty exhaust note.

Talking about gearbox performance, the unit on the CB Shine SP feels better with crisper shifts. NVH levels on both the bikes are disappointing as vibes can be felt from fuel tank, handlebar and footpegs. The Honda offering does face cold starting issues which can get irritating when you’re in a rush to reach your destination. Talking about fuel efficiency, the Honda CB Shine SP is the more frugal of the duo returning us 63kmpl overall while the Bajaj V15 recorded an overall mileage of 55kmpl.

Being a commuter offering, both the bikes have an upright and comfortable riding posture, personally I felt the V15’s riding stance marginally better owing to the wider bars. But I found the saddle of the Bajaj offering a bit to soft for my likening as the rider ‘sinks’ into it after spending considerable time riding. Handling performance of both he bikes is good as they feel stable and confident while going fast around bends. But agility is of more prominence for a commuter bike and on this aspect it’s the Honda CB Shine SP that feels swifter on its feet while negotiating traffic. Also the fact that it is more than 11kg lighter than the Bajaj offering works in its favour.

With respect to better ride quality it’s the Bajaj V15 that wins the battle owing to its plush ride and it rolled offer bumps, broken surfaces an undulations effortlessly. The ride quality of the CB Shine SP isn’t bad particularly but it feels marginally stiffer. Braking is done by disc brake at front and drum unit on the rear on both the motorcycles. Our test bike was equipped with disc brakes and CBS (combines braking system) which are optional extras on the Shine SP. Braking performance of both the motorcycles is satisfactory with the Honda offering providing slightly better bite and feedback.

The Honda CB Shine SP is offered in three variants – standard (drum brakes on both ends) has been priced at Rs 60,284, deluxe variant (disc brake at front) carries a sticker price of Rs 62,783 while the CBS variant retails for Rs 64,784. Among all the above three variants our choice will be the CB Shine SP deluxe model. Like all Bajaj offerings, the Bajaj V15 has been priced aggressively at Rs 62,000 making it a good value for money proposition (all prices ex-showroom Delhi). So which one will we suggest?

The answer is rather simple as the Honda CB Shine SP is the better engineered product despite it lacking in displacement. The Honda 125cc bike has the better engine and mileage while feeling more useful in cityscape and has pleasing styling too. The Bajaj V15 is a good buy if you want a product that stands out from the crowd and want bragging rights of owning a 150cc motorcycle (the V15 is the cheapest 150cc bike on sale currently). But it just can’t match the engineering finesse and the reliability factor associated with Honda and hence the CB Shine SP is our winner.

Bikes Similar to V15 Power Up