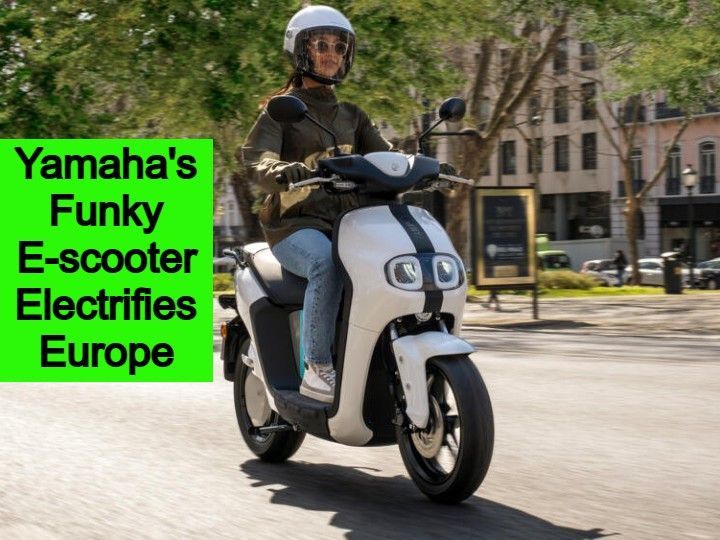 Yamaha had unveiled a range of EVs including the Neo’s electric scooter in the previous week, and now the company has launched the e-scooter in the European market. The Yamaha Neo’s electric scooter is priced at GBP 3,005, which translates to around Rs 3 lakh. That’s around Rs 39,500 less expensive than the Yamaha NMax 125 in the UK. Yamaha says the e-scooter will be available in select European markets starting from May.

The Yamaha Neo’s is essentially an eco-friendly take on the original 50cc petrol-powered Neo’s that was popular in the 90s. And consequently, it retains some of the trademark design elements including the distinctive twin headlights. The e-scooter comes with a curvy yet compact looking bodywork, complete with rubber mouldings around the edges of the bodywork to protect it from minor scratches.

The e-scooter is powered by a brushless DC hub motor, producing 2.06kW in STD mode, with a top speed restricted to 40kmph. The Eco mode, on the other hand, reduces the peak output to 1.58kW and restricts the top speed to 35kmph. In this mode, the claimed range stands at 38.5km, and using an optional secondary battery pack, the total range can be expanded to around 68km. Each 50.4V/19.2Ah lithium-ion battery pack weighs 8kg and is removable. It takes around 8 hours to fully charge using a domestic charging point.

Other notable features include a smart key and an LCD instrument cluster with smartphone compatibility. It allows users to access functions including vehicle battery status, route tracking, viewing of calls and messages, and a generous 27 litres of underseat storage. Do note that this storage space will be affected if a secondary battery is used.

The e-scooter rides on 13-inch alloys with low rolling resistance tyres. Suspension includes a KYB telescopic fork and a single rear shock absorber. At 795mm, the seat is fairly accessible, and the scooter is also fairly light at 90kg without the battery. The 135mm ground clearance may be low by Indian standards, but should be sufficient for well-paved European roads.

Summing up, the Yamaha Neo’s electric scooter is the right step forward for the bikemaker when it comes to electrification. However, the asking price is too steep for what at the end of the day is a 50cc equivalent scooter. Yamaha will not be launching the Neo's here but will bring an EV developed specifically for India in the future. But if you're looking for an affordable electric scooter, you can consider the Bounce Infinity E1. We took the e-scooter out for a spin and here's what we think about it.