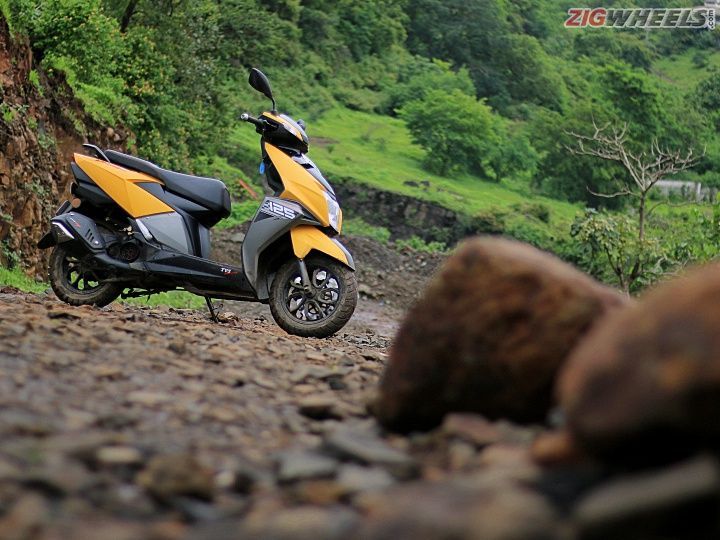 So far, the NTorq has been a hoot to ride on my commutes from home to office and back. But as I pointed out in my earlier report, I did face some challenges with it during the rainy season - one being the water issue on the floorboard (read all about it here). Here though, I am going to talk about my struggle with visibility and tyre grip that I faced during the rainy months in Pune.

As I pointed out earlier, our comparison road tests confirmed that the NTorq’s headlight intensity isn’t really a segment benchmark. That said, commuting in the night is quite manageable in dry weather conditions as the throw is more focused rather than widespread for both high and low beam.

Ideally, a focused throw should illuminate the road as well as obstacles ahead of you quite well. However, the illumination itself isn’t strong enough. This became a cause for concern as wet roads tend to reflect a lot of glare, which used to strain my my eyes quite a bit.

Moving on to the tyres, the Remora rubber on our test unit provided outstanding grip in the corners and even while braking. However, the tyres need to get up to optimum temperature for maximum grip. Sadly, these units take time to heat up since these are developed to last longer than provide outright grip. This trait takes a toll on its capability in wet road conditions. This is something that really hit home after I encountered a series of mucky and loose surface patches on wet roads. The moment these tyres came in contact with these patches, they lost traction rather quickly and without warning. I did try lowering tyre pressures to compensate, but nothing really seemed to work in its favour.

The only way to tackle these two issues was to be more vigilant and ride more cautiously than I otherwise do. Although this was quite easy to do, it did take away some fun from my daily stints in the rain.

All things said and done, the sun’s been out for the past 15 days and the TVS NTorq has managed to return 43.4kmpl in the city, which I think is admirable with my throttle-heavy style of riding.