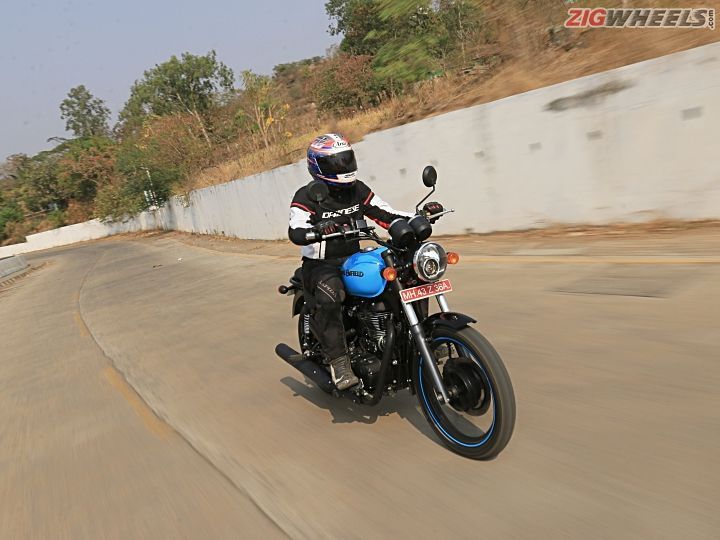 The Royal Enfield Thunderbird has been a good touring option for those who fancied a cruiser-style motorcycle but wanted to be part of the Royal Enfield community. The new Thunderbird X uses the same formula in a new, bright skin along with a few relevant touches aimed at making it more street-friendly, and is available with both the 350cc and 500cc engine options Do these changes make the Thunderbird X more likeable or does it miss the charm of the regular Thunderbird? Well, we got our hands on the 500X to try and find that out.

It's all in the looks
Royal Enfield has been churning some good-looking bikes recently. Prime examples being the upcoming 650cc twins - but those are still a few months away. While the Thunderbird 500X is based on their touring bike, it looks aces. Look at it from a distance and you’ll be forgiven for thinking that Triumph has come up with a single-cylinder Bonneville. The colour play of using a brightly coloured fuel tank with blacked out everything makes the bike look youthful and appealing. Sportiness comes in the form of a shorter handlebar, smaller one-piece seat and blacked out alloy wheels with rim tapes matching the colour of the fuel tank. It is available in four bright colours: blue and orange for the 500X, and red and white for the 350X. We think the blue one is the best of the four.

However, step closer to the bike and you start to notice imperfections. The paint finish on the fuel tank could be smoother. Then there is the abundance of exposed wiring that’s annoying. It is there on the Thunderbird 500 as well but gets hidden between all that gleaming chrome. With the Thunderbird 500X’s all-black silhouette you can't help but notice the messy wiring and exposed red and white connectors behind the headlamp and underneath the fuel tank. The new seat too looks fantastic, especially the colour-coded stitching -- but look closely and you will notice that the stitch lines are offset.
Overall, the Thunderbird 500X looks fantastic but loses out when it comes to the finer details. Heck, our test bike even came with a misaligned rear fender.

How is it to ride?
The 500X uses the Thunderbird 500’s underpinnings so it rides and handles like any stock Thunderbird would. What has changed is the riding position, thanks to the new handlebar. The more aggressive riding position gets you closer to the action and the new handlebar gives you a better inkling of what the front end is doing than the ape-hangers on the stock Thunderbird. It does make you reach out a bit, which is not too comfortable given that the footpegs still use the relaxed forward-set position. It also brings in a lot more vibrations, which will be uncomfortable on longer rides.

The other downside to the new handlebar is the vibrations that make the mirrors useless between 2-3,000rpm, to the point where the whole bike not just vibrates but shakes. The other thing that shakes is the whole instrument cluster. Interestingly, the vibrations can be felt on the handlebar and footpegs but not the seat. The new seat has a firmer cushioning, unlike the super soft ones on the Thunderbird, which would be a bit of a back strain for most on longer rides. The new seat profile is comfortable though the pillion would not be too happy given the lack of real estate at the back. Well, you can always get a pillion backrest from the RE accessories list.

The other major change is the switch to alloy wheels (an RE first) which has allowed Royal Enfield to finally fit tubeless tyres (another RE first). Wheel profiles remain the same 19-inch front and 18-inch rear. While one benefit of this switch is the better cushioning afforded by tubeless tyres, given that the Thunderbird’s 41mm telescopic front fork and twin gas-charged rear shock absorbers are inherently soft, it's quite difficult to gauge a perceptible difference in ride quality. The front end does feel a wee bit lighter to steer through. Braking remains unchanged with the 280mm front and 240mm discs trying to haul this behemoth down. It still does not get ABS.

Powerplant remains the same 499cc air-cooled single in the same state of tune. It makes 27.5PS at 5250 rpm and 41.3Nm at 4000 rpm. It is a torquey unit that gets the bike up to speed in a fairly rapid manner but the issue is vibrations exactly at the sweet spot rpm where you end up riding in the city. Once past 3,000rpm, the vibes die down but soon it is time to shift up. Interestingly, the Thunderbird 500X weighs the same 197kg (kerb) as the Thunderbird 500, so performance is in the same ballpark. Unlike the clunky gearboxes Royal Enfield is known for, the Thunderbird and Thunderbird X’s 5-speed unit has a surprisingly positive shift feel. But its awkwardly high-positioned heel-and-toe shifter makes it difficult to shift with chunky riding boots. Clutch feel remains heavy. The overall ride experience is like a Thunderbird but with a more aggressive riding position and more vibrations, although the latter could just be an issue with our test bike.

This or the stock Thunderbird 500?
If you have decided to pick up the Thunderbird, then the 500X is definitely worth a look purely for its modern appeal. The 500X retails for Rs 1.98 lakh (ex-showroom Delhi), which is Rs 8,000 more than the Thunderbird 500. For that premium you get a bike that looks way more expensive. It loses a bit on the Thunderbird’s relaxed posture, its aggressive riding position might be a stretch for some, extra vibrations and small pillion seat. It is more of a heart over head buy, the 500X. If you are willing to look beyond its flaws, the 500X does make sense.