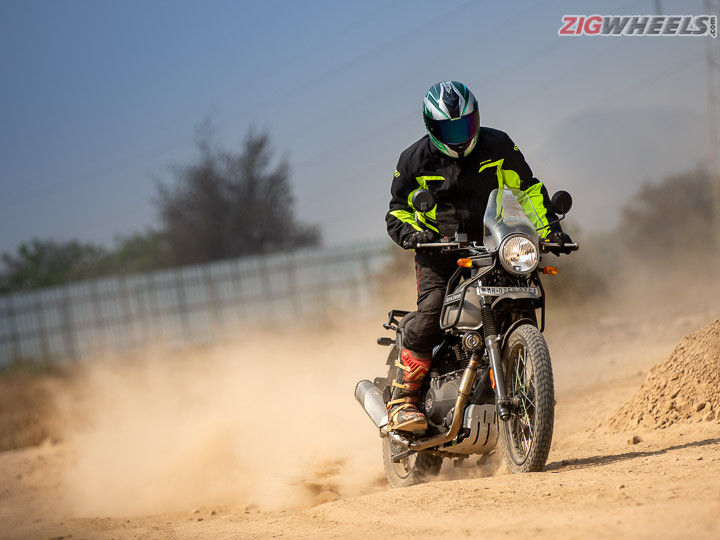 The motorcycle-market prophecy was, the Himalayan’s time to shine would end the day another motorcycle of its kind would arrive. When the covers first came off it in February 2016, the Himalayan made a promising impact on a long-starved audience. Then, as it struggled to withstand the test of longevity, the mountain of expectations it built up dwindled rapidly. Royal Enfield did clock in the additional hours, the admirable results of which were seen in the BS4 version of the Himalayan, but the clock never stopped ticking for its fate. A prophecy, however, is essentially conjecture. It predicts the future based on insight, but never the present.

The present is where we are, here and now, and in this present, far from being dead, the Himalayan is now BS6 compliant. To its credit, it still is a very young motorcycle and remains significantly different to Royal Enfields as we’ve known them to be, with the exception of the 650 twins. In just four years, Royal Enfield has had no option but to give it two mandatory (and fairly expensive) emissions-related updates, all the while having to maintain its value positioning. Remember, the first-gen Himalayan came with a sticker price of Rs 1.55 lakh which has inflated to Rs 1.86 lakh for the newest, BS6 version. A 30k increment for a 411cc motorcycle over a period of four years sounds reasonable, right?

The premium you pay today gets you, apart from a law-abiding Himalayan, a nicer-finished machine. Apart from the new paint schemes (the one in the pictures is called Gravel Grey, priced at Rs 1.89 lakh; the two-tone models cost Rs 1.91 lakh), there is little else to distinguish the BS6 bike from its predecessors - at least from a distance. Use the eye you reserve for details, though, and you’ll find the areas in which Royal Enfield has made an effort to elevate the Himalayan’s visual quality perception.

From the rider’s seat, you’ll notice that some of the blacked-out bits -- the steering top yoke, the handlebar-end weights and the fuel-tank cap -- now bear a sandblasted texture which looks and feels fabulous. The instrument cluster remains busy as ever but the digital inserts are now white-backlit (as opposed to orange on the older bike) which just makes it appear a little cooler and contemporary. On the instrument pod, you will now find a button that lets you disengage ABS at the rear wheel, should you feel like letting your hair down off the road. As ever, the compass retains its little space on the cluster, providing you with a constant feed on the direction of your travel, a feature last seen or used in the 16th century.

Thumb the starter and all the all-too-familiar LS410 thrum emerges from the upswept exhaust can. It sounds crisp and analogue but is, even in BS6 form, accompanied by a fair degree of engine noise. It’s nothing a good helmet can’t insulate you from, but the fact that it exists is just unaesthetic, even if it means no trouble. Having spent several thousands of kilometres in the Himalayan’s seat since it was first launched, I was happy to be back on board. It’s ergonomically perfect for someone who claims to be 6-feet tall (I’m only a few millimetres short of the magic number) and more than adequately roomy for someone who never owns up to weighing a hundred kilos (ahem!). While it retains its segment-best 220mm ground clearance (matched only by the XPulse) and its lowest-in-class seat height (800mm), some of you may frown at the news of it having gotten heavier by 5kg. At 199kg, the Himalayan is heavier than the second heaviest sub-400cc adventure motorcycle, the Kawasaki Versys X300, at 184 kg; and the latter has one extra cylinder over the Himalayan! Some sources claim the weight hike has come in owing to chassis reinforcements made to address customer-generated concerns, but there’s nothing that’s visible to the naked eye.

What is, is the can of Coke that’s been welded into the header pipe - or, what you and I know as the catalytic converter. It’s among the crucial components that make it BS6-compliant, the result of which has been a 0.2PS deficit (24.3PS @ 6500rpm) while torque output remains unchanged - 32Nm at 4250-4500rpm. Alright, so there’s nothing in the name of evolution and if you’ve kept off the Himalayan for want of power, the BS6 version still isn’t good news. Those of you who have chosen to read on will be pleased to note that it retains the Himalayan’s inherent crispness and the newfound refinement since BS4 happened. It’s quick on its feet, too, clocking 0-60kmph in 3.87 seconds and 0-100 in 10.49 seconds, numbers that are respectable for the sort of riding pattern the Himalayan represents. While the improvement in engine characteristics over the BS4 is microscopic, the impact of the tiny power drop and weight hike is entirely invisible.

In the real world, this translates to, firstly, a fantastic commuter. The pliant suspension, high ground clearance and healthy torque output makes for an empowering proposition in the city. Once you get acquainted with its dimensions, you will surprise yourself with how crafty you can get with the Himalayan in moving traffic. It is also one of the sweetest motorcycles in the sub-Rs 5 lakh category for pillion comfort. The seat is well-padded and roomy, with the footpegs being positioned just right for a long day looking over your rider’s shoulder, and the felted seat feels wonderfully premium, too.

Two things do stand out in the Himalayan’s list of imperfections, the strongest of which is the front brake lever feel. While braking power is adequate, the lever feels spongy as ever and, if you were to switch between the Himalayan and, say, a KTM Duke 390, you’d need a lot of mental recalibrating. The second (slightly more subjective) issue is the heavy-ish clutch, which may give your fingers a small workout if you were to end up in a snaking traffic jam. Engine heat in this scenario is noticeable, but nothing that will leave you wanting to file a lawsuit.

On the highway, the Himalayan’s performance underlines its intended engineering philosophy, of being a somewhat submissive, easygoing but ever-willing motorcycle. Without a doubt, it lacks anything you could call ‘firepower’ but if you are interested in travel, in a sort of old-world way, you will like the Himalayan. Like on the BS4 version, the Himalayan has a pronounced layer of torque between 3500 and 5000 rpm, in which region it also sounds the nicest - like a sort of heavily hyperventilating Bullet. Tractability has never been an issue with the Himalayan and the BS6 version continues with the tradition, allowing you to pull away smoothly in top (5th) gear from around 40kmph. At 100kmph, with the revs huddled around the 5000rpm mark, the Himalayan feels well-settled, and it feels marginally smoother than the BS4 which was already quite good in this aspect. Two-up, I managed to get to an indicated 120kmph and while a lighter rider may be able to pull away faster, frankly, it begins to feel a bit stretched beyond 115kmph.

To cite a personal perspective, I find long-distance travel enjoyable when it involves maintaining good average speeds rather than short, tense bursts of higher speeds, and the Himalayan’s 100kmph cruising speed fits me like a glove, allowing me fewer halts for petrol as I hum away within my helmet. If it works for you, then the Himalayan will delight you with its analogue sensations, confident stride (courtesy the 21-/17-inch wheels) and long-haul friendly ergonomics. To top that, the headlight intensity and spread are also decent although Royal Enfield would do well to offer a set of optional auxiliary lights.

Where the Himalayan punches above its weight (pun intended) is off the road. It was always blessed with great balance courtesy the chassis geometry and weight distribution (honed by UK-based Harris Performance) and that resulted in a motorcycle that was amply communicative. Apart from having the hardware to plough through challenging terrain, the Himalayan’s rookie-friendly power delivery further enhanced its go-anywhere ability and despite the 5kg hike, nothing has been taken away from its mannerisms. Unlike every other bike in its class, the Himalayan has a distinct ability to crawl at low speeds, never requiring excessive revs. The spot-on off-road ergonomics, allowing the rider to knee-grip the tank naturally, with an effortless reach to the handlebar, add to the Himalayan’s comfort and confidence to venture into the unknown.

There are a couple of flaws here, though, the smallest of which is the centre-stand grazing over bumps with the rear suspension at about 75 per cent compression (give or take a bit, depending on rider weight). The second issue is the weight of the motorcycle itself, which will impact the inexperienced a bit strongly especially if it involves low-speed crawling. By the look of it, there is very little scope for weight-reduction on the Himalayan unless you get seriously liberal with a chainsaw. The last concern area is, of course, the Himalayan’s Achilles heel: durability. Over the years, Royal Enfield has worked on eliminating the Himalayan’s weaker components, but whether the BS6 version is the one that plants a full stop to the odd unhappy customer that you read about on Twitter remains to be seen.

So where does that leave you, the adventure-hopeful willing to put her/his money down on a motorcycle you want to tour the country on? Considering that manufacturers are still slacking on taking the adventure motorcycle plunge (Bajaj, TVS, Yamaha, Honda and Suzuki haven’t even indicated an interest in the class while Hero has only just showcased a rolling chassis, destined for a late-2021 launch at the earliest), the Himalayan BS6 is the best of its kind you can have at the moment. The XPulse, while a sweet motorcycle, lacks the Himalayan’s versatility to suffice as the only bike in your garage and the KTM 390 Adventure, while theoretically more potent (a road-test awaits!) is also significantly more expensive, being priced at Rs 2.99 lakh (ex-showroom) Royal Enfield Himalayan BS6 Price.

Thankfully, even when viewed in isolation, the Himalayan BS6 is a well-rounded package which is now just that little bit better than before. It’s a nice motorcycle to tour the country on, and even if you don’t actually do so, it makes you look like the sort of person who does so with regularity. The Himalayan certainly isn’t flawless or entirely satisfactory in any singular aspect, but it makes up for these gaps by painting a picture of opportunity, inciting you to travel and explore on a whim. For that alone, it is and will continue to be relevant, even when the competition arrives in wholesomeness. So much for prophecies, then, right?