Just how good is the brand new 250 Duke? Is it a mere upgrade for current 200 Duke owners, or more? 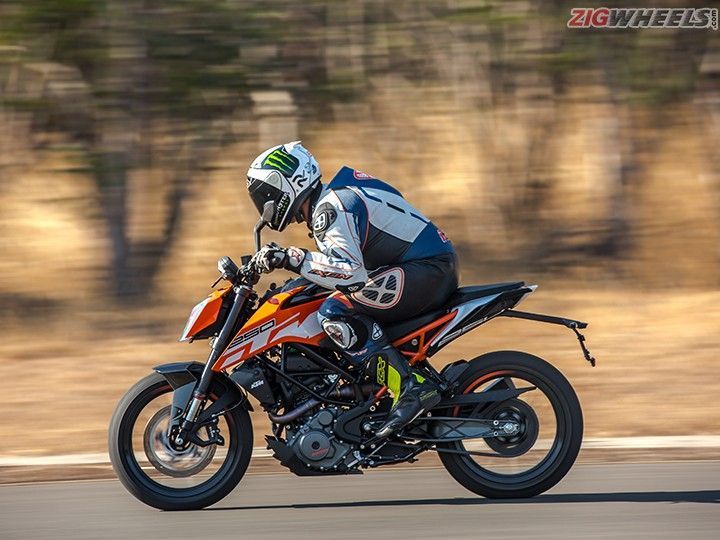 When KTM launched its 2017 Duke range for India, the big surprise was the introduction of the 250 Duke to the 2017 line-up. The new revamped motorcycles and line-up is offering Indian buyers so much more in terms of appeal and choice. The 250 Duke sits in the middle of the family, between the entry level 200 Duke, an exciting but usable motorcycle, and the positively frantic 390 Duke on the other.  So who exactly should be interested in the 250 Duke? And, why?  We swung a leg over the 250 at Bajaj’s test track at Chakan near Pune, and here’s what we found out.

If you found the 200 Duke’s performance a bit underwhelming and the new feature-loaded 390 Duke out of your budget, the 250 Duke offers a nice middle ground given its new 1290 SuperDuke R-inspired styling, able performance and reasonable pricing. Its 249cc, liquid-cooled, single-cylinder engine has been downsized from the 390 Duke’s 373cc motor. With outputs of 30PS and 24Nm, the 250 Duke seems to be just a bit too close to the 200 Duke in the horsepower stakes. It offers you 5PS and 5Nm over the 200 Duke, which can’t be scoffed at as the increase in weight is just 13kg.

Many of the updates promise to make it better to ride but the big advantage, apparent even at standstill, is the 250 Duke’s styling. With a price tag of Rs 1.73 lakh, ex-showroom New Delhi, the 250 Duke commands a premium of just Rs 30,000 over the 200 Duke. The 250 Duke also spaces itself well from the more powerful 390 Duke that costs over half a lakh more.

Is it a looker?

Styling is distinctive, and the 250 Duke looks fresh and very appealing. Not to mention, most of the design is also similar to the new 390 Duke’s, and the 250 Duke looks smashing. Its flat, trapezoidal headlight gets LED DRLs though the headlight is not an LED unit, clearly to keep costs in check. The tank extensions look nice, and at 13.5 litres the fuel tank is larger than the 200’s, but is visually slimmer. Clocks are the same as the 200 Duke’s, with an orange backlight, and the 250 does not get the 390’s funky-looking colour display.

The 250 uses a new two-piece trellis frame with a bolted-on sub-frame, again the same as the new 390 Duke. The chassis sits more exposed than before and looks all the more striking. The side-mounted exhaust is a nicer looking unit than the 200’s underslung exhaust, and is the same sleek looking unit we first saw on the new RC 390. The 250 Duke gets the same 110-section (front) and 150-section (rear) tyres as the 200 and 390 Duke, though it does not get the stickier Metzelers as the 390 and makes do with radial MRF rubber which is a softer compound than the 200 Duke’s.

How is it to ride?

A couple of hours on the 250 Duke at Bajaj Auto’s test track proved that performance and handling are in line with my expectations of it being sharper, powerful and more fun to ride than the 200. The 250 Duke is quicker off the line, and mid-range punch is particularly strong, with performance tapering off at the top of the rev range rather expectedly. Cross 4000rpm and the motor buzzes to life, accelerating hard. On the other hand the new engine sounds calmer, less loud and more mature than the 200’s raspy sound.

We are yet to test the bike for performance, but the 250 Duke feels quicker than the 200 Duke by a fair margin. In-gear acceleration is quicker – a mere twist of the throttle is required to overtake at most times thanks to its close gear ratios, courtesy the bigger rear sprocket. KTM couldn’t confirm the difference but the 250’s sprocket is bigger than the 200’s.

The improved acceleration comes at the expense of top speed, and the 250 Duke managed to hit 136kmph consistently on the speedometer at test track, which is far off the 390 Duke’s abilities, but sufficient for our roads. With one and half times the power, the 390 Duke will be way quicker too, but the 250 Duke is quick enough to be fun even for experienced riders as well. With its torquey nature the 250 should be good fun in city, and should be easy to ride in traffic without the need for too many gear changes, making it an ideal commuter.

The engine feels refined, with just a hint of vibration from the footpegs which never really got distracting. The 250 Duke also felt more relaxed and comfortable cruising at triple digit speeds, as the higher torque output lets the engine spin at lower revs than the 200 Duke at speeds of 100-120kmph, which should make it a better tourer. The 250 Duke misses out on the 390’s ride-by-wire but throttle response is quick thanks to the quick-revving engine and corners exits thanks to the response and the torquey mill are quick.

That’s nice, but how does it handle?

The 250 Duke’s handling is a lot better than the 200 Duke’s. Credit that to the new chassis and new suspension. Upfront the 250 Duke now gets ‘open cartridge forks’. Visually, these are the same 43mm upside down forks as before, but are entirely new units. The open cartridge refers to the new internal hardware the forks use, which KTM says will allow it to offer suspension adjustment in future. The forks should offer 7-8mm of adjustment, and the feature is expected to be incorporated in the next update, which obviously is some time away.

The rear monoshock features separate chambers for oil and gas to enhance cooling of either element says KTM, in turn improving the bike’s damping, but more on that later. The suspension at both ends works in better sync with each other – while the front felt more communicative when leaned over hard, the rear offered a nice blend of ride and handling even on undulated surfaces. More importantly, directional changes were niftier on the 250.

The test track includes a series of left and right corners and the 250 Duke, expectedly, was quick to flick from side to side. Its wheelbase is shorter at 1357mm than the 200’s 1366mm, which is another reason behind its sharper behaviour. The chassis and suspension help it stay planted at all times, while grip from the MRFs is aplenty on most occasions. The 250 Duke’s tyres have the same speed rating as the 200’s at 180kmph, but the compound is softer, and hence the better grip. That said, the Metzelers would have been nicer to have, and will enhance the 250 Duke’s manners further. What works in favour of the MRFs is the fact that they will boast a longer life and are more affordable than the Metzelers.

I was expecting the ride quality to be firm, but was pleasantly surprised to notice it was anything but that. The ride was pliant and while only a full test on our roads will help us assess it better, initial impressions are good. The test track has its share of undulations, and the 250 Duke had no trouble soaking it all in without unsettling the bike or rider. The plusher suspension coupled with the new, softer seat make the 250 Duke comfortable. The seats for rider and pillion are wider, and the rider even gets more area to move around which is a welcome change from the older bikes’ cramped seat.

As a motorcycle the 250 Duke is impressive on its own, and makes great sense for someone wanting a quarter-litre machine with its fresh design, impressive performance and able handling. It feels quick thanks to its punchy and responsive engine, while ride quality is good too. Its pricing of Rs 1.73 lakh, ex-showroom New Delhi, sweetens the deal further as the bike commands a premium of just Rs 30,000 over the 200 Duke. In essence the 250 Duke is more than just an upgrade for 200 Duke owners. That said, there will be owners who will upgrade to the 250, while some would skip it and directly eye the new 390 Duke. The bottom line is that the 250 Duke is yet another affable motorcycle in the Duke family, and yet another interesting option for someone wanting to own a KTM.