World over Husqvarna is getting a helping hand from KTM to find its feet. In India, the Svartpilen and Vitpilen 250s find that connection to be a bit bitter sweet 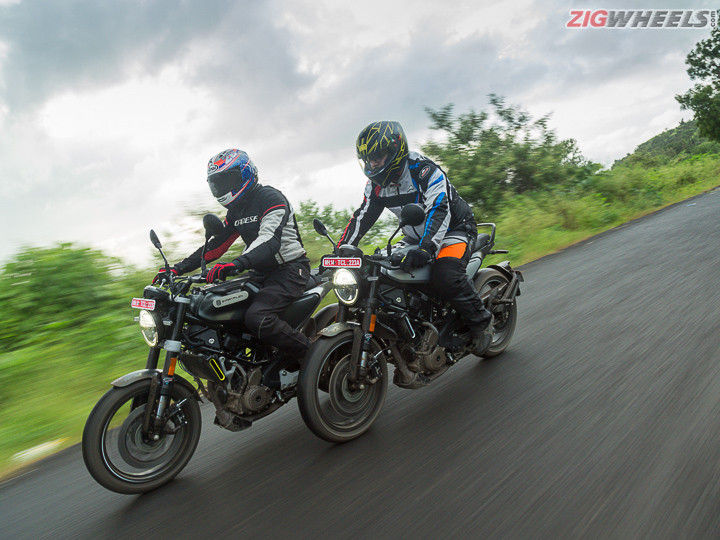 Swedish motorcycle brand Husqvarna became a part of the Pierer Mobility family in 2013, and thus became a sibling to KTM. In a short time Husqvana has learned and borrowed, not just from KTM’s playbook, but also from its model lineup to make its mark around the globe. In India, we are being introduced to brand Husqvarna via the Vitpilen 250 and Svartpilen 250. These are based on the KTM 250 Duke’s mechanicals, but instead of shouting about raciness, the Swedes are murmuring in sophisticated tones about style, leisure and premiumness. Can this frankensteining of hardware and soul create a Husky that can befriend the hard-nosed and spoilt-for-choice Indian biker?

Meet Svartpilen, aka the black arrow. To be clear, it uses a very deep shade of green, not black. The block pattern for the tyres and the braced handlebar are cues that mark this out as a Silverpilen fanboy. The Silverpilen is Husqvarna’s template-setting motocrosser from 1955 that put Husqvarna, the hometown of the bikemaker, on the world map by winning enough accolades to fill all the local Ikea stores. But unlike the Silverpilen, the Svartpilen doesn’t love the dirt, it likes the idea of it. More details in the next section.

Then there’s the Vitpilen, aka the white arrow. This isn’t white either; it’s silver and while it shares its mechanicals with the Svartpilen, it has a distinctly different attitude. Its clip-on handlebars, raised footpegs which are pushed further back and the lack of bodywork give it the quintessential cafe racer poise.

Scandinavian design is renowned for its minimalism, eloquence and enduring beauty. The Huskies also add a bit of cheekiness and modernity too. It is incredible that all these ideas are baked into the few panels and instruments it wears. The coloured surrounds for eyelets on the radiator shroud, the Husqvarna gun-sight logo etched on the wheel, the single piece panels from the tank to the tail and the round treatment for the LED DRLs embody these ideas well.

However, the Huskys look a bit awkward and underwhelming from some angles. For instance the stubby tail section, despite the best efforts of the handsome LED tail lamp, looks out of place on a 250cc bike. Then there is the tangle of wires underneath the tank, which are far more obvious here compared to the Duke due to the reduction in body work. We were expecting an uptick in the premiumness quotient, and depending on how closely you look, you would say the Swedes are on par, or just slightly better, than the Austrian siblings. To clue you in - look out for the etched logo on the wheels, the pin stripes on the wheels and the golden tank cap.

The Svart’, aside from its braced handlebar and tank rack,  doesn’t wear any other signs of being rough and ready. Spoke wheels or serrated footpegs would have spiced up coffee table conversations for sure. Worse still, its hardware is identical to the cafe racer, and so the Svartpilen ends up lacking in promise and panache. The Vitpilen could have also flaunted trinkets like bar-end mirrors, but despite these misses this unfaired yet racy ride feels appealing and substantial.

Both the Huskys are essentially the same?

There are some very very minor differences, but these don’t change their appeal or functionality. For instance, the Vit uses white instead of neon yellow highlights  (Svart) on the radiator shroud. The Svart also uses a split seat with a coarse fabric texture, whereas the Vit uses a single piece seat wrapped in a softer and more premium looking material. The Vit rides on five-spoke wheels, whereas the Svart uses eight-spoke wheels. The Svart also gets an exhaust shield to soften any blows that may come your way when scrambling down some brown lanes. Under the skin, these two are virtually identical, and so is the KTM 250 Duke.

Quite simply, lots. The 248.8cc engine is carried over as is, packing the same 30PS and 24Nm of torque which are made at the same revs as the Duke.  The Husky’s chassis DNA mirrors the Duke exactly, with 25 degrees of rake, as the main trellis frame is the same. The 1357mm wheelbase and tyre sizes are identical too. The same goes for the 320mm disc up front and the 230mm rear disc. So, it’s easy to see that they are very closely related. The electronics kit, like the dual-channel ABS with Supermoto mode, is the same too.

They have the same WP suspension, albeit in a slightly different state of tune. In fact the Svart’s ground clearance and rear suspension travel are marginally lower than the Duke, 2mm and 4mm, respectively. Its scrambler quotient seems a bit hollow when you look at these figures.
However, these figures don't mar the sporty cafe racer’s appeal at all.

What’s different from the Duke?
For one, the turning radius. Here, the Svartpilen has a tighter turning radius than the Duke,  2365mm vs 2513mm. The Vit’s 2560mm also does better than the RC’s massive 2780mm. The headlamp too is far more effective at lighting up dark roads with their wide spread and good throw. Aside from these, the differences aren’t the kinds you’d shout out about. For instance, a big chunk of the reduction in kerb weight by 4.6kgs can be pinned on the fuel tank capacity having dropped  from 13.4 litres on the Duke to 9.5 litres on the Huskies. So if you were planning to use these for long distance rides, be prepared for more fuel stops.

Then there’s the seat height; at 842mm, it is about 20mm more than the Duke. Riders shorter than my 5’6” frame will find this a bit daunting. Although, despite being on tiptoe, the slimness and the lightness made it easier to manage than expected.

Then there is the pillion comfort, or the lack of it. Even though Husqvarna has lengthened the subframe to increase space for the pillion, the seat is still too short. If it weren’t for that tall grab rail propping up the pillion’s derriere, sitting here would be impossible. This will further dampen plans for touring as the space for loading luggage is limited. However, the cafe racer might just  find a silver lining here as the flatter seat would make this a bit kinder to pillions than an RC!

Beauty, not style, is skin deep.

Unsurprisingly, the Husqvarna’s felt very familiar to ride. But there was one riding experience that brought joy to my heart, and that is the Vitpilen. The seating position and the lack of body work made it feel like I was floating above the road on a Batpod, looking intently for the next destination to zoom towards. Cool beans!

This 248.8cc motor was accused of not being frantic enough for a KTM, and now for the very same reason fits right into the play-it-cool Husky mould. The engine can tackle slow speeds without grumbling, but show it an open road and it will bring the zing in a jiffy too. It’s fast in a fun vein, not manic.

The slipper clutch equipped motor is especially well suited for the Vitpilen, revving to 11,000rpm eagerly in a fairly linear manner. Even on a wet day and with BS6 compliant hardware the Swedish arrows shot from 0 to 100kmph in what could be the fastest times in the 250cc class in the BS6 era. They also have a top speed of about 130kmph. Shedding speed was just as hassle free, taking 48.98 metres for the Vit and 50.7 metres for the Svart from 100kph. Strong bite and a consistent feel at the lever means emergency stops wont worry you either.

The Svartpilen, despite its easier riding position and greater maneuverability, didn’t feel all that enjoyable. The need for more grunt on this scrambler-esque motorcycle was evident. Bombing down bad roads, our enthusiasm was reigned as slight jolts from the potholes reminded us that ground clearance and the suspension travel is the same as the Vitpilen.

Both motorcycles are fantastic fun to hustle over a winding road. Riding the Svartpilen supermoto style showed that the MRF’s Revz FD were superb even in the wet! The Vitpilen felt fluid and all the more enjoyable because of the plush suspension. It may be because you tread with a bit more caution on the cafe racer and the higher load on the front wheel makes it feeling more plush and absorbent. One thing is clear, it is more comfortable than the RC thanks to the added suspension travel.

This introduction to brand Husqvarna has left us a bit muddled. If we were to think from our heads, the conclusion would be easy - choose the KTM.  Interestingly, Husqvarna has priced these products below the KTM in India, whereas in other markets the ‘pilens are at a premium. This makes it look past the realisation that the Husqvarna’s fit and finish isn’t all that premium when compared to a KTM. For some riders, the stack of cash saved will also make up for the practicality concerns.

But the Husky’s aren’t about logic, they are about emotion. They wish to speak to the heart. Sadly, the Svartpilen does so unconvincingly. From the saddle its most convincing conversations aren’t about giving into temptations of reckless abandon. Worse still it doesn't pretend to be wild enough enthusiastically. Hopefully, the arrival of the raucous 44PS motor between its trellis frame will change the opinion.

In contrast, the Vitpilen speaks softly, but surely.  It grabs the attention of passersby, but more importantly it makes the rider look back lovingly right after he, or she, has hopped off. Incredibly, under its seduction routine there is actually a bit more of everyday sensibility than you would find on an RC. So, what Husqvarna really stands for today may not be crystal clear, but we know the Vitpilen, and it is a sweet Swede.