Does the Maestro Edge 125’s larger engine make up for the shortcomings of its smaller-engined namesake? 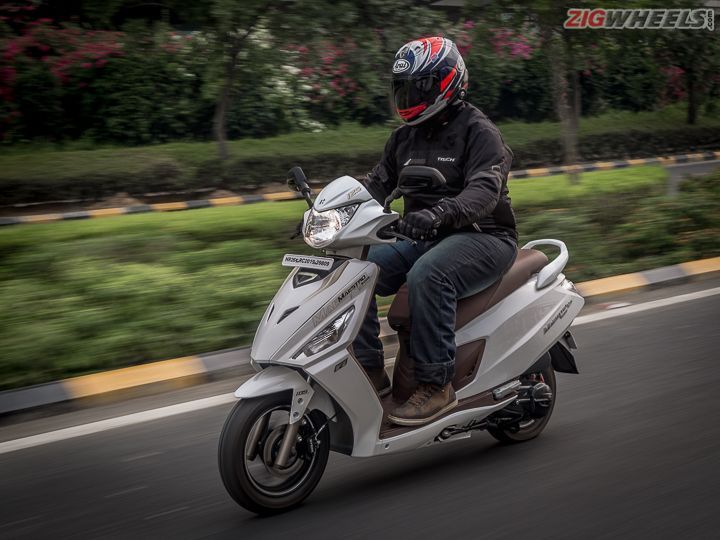 The Hero Maestro Edge (110) is a scooter that we’ve always liked. It brought young yet restrained style to the company’s scooter portfolio, and it was pretty good to ride as well. But it was somehow never special, mainly because its 110cc motor wasn’t really impressive. At Auto Expo 2018 though, Hero MotoCorp did give us some hope when they took the wraps off the Maestro Edge 125. Cut to fourteen months later and this new Maestro has finally hit the road.

Thanks to FI, throttle response is really crisp now. Open the throttle at any speed, and barring the slight variomatic slack, the scooter reacts with immediacy. And when you factor in the not-so-heavy kerb weight of 110kg, it manages to pull quite strongly as well. While it’s quick, don’t expect it to perform like the TVS NTorq. The Maestro Edge 125 isn’t meant to be a sporty scooter by any means. On our test ride, we were only able to get it up to a speedo-indicated 90kmph. Also, it’s not the smoothest scooter engine we’ve encountered. There are some slight vibes that can be felt in the floorboard at around 50kmph. But honestly, they’re not too bothersome.

The features aren’t that different from the Maestro Edge 110

We were kinda hoping that Hero would go all guns blazing and load up the Maestro Edge 125 with many more features than the 110cc version. But in order to keep costs down, Hero hasn’t deviated too far from the smaller scooter. It still retains a halogen headlight as well as a fairly basic semi-digital instrument cluster - no LED headlamp or all-digital dash here. But the 110 had some other, more useful features, which are thankfully all carried over. You get a remote fuel filler cap for the 5.5-litre fuel tank as well as a remote seat opener, both of which are operated from the all-in-one ignition key slot. Under the seat, you also get a boot light and a USB charger.

The one new feature that Hero has added is the i3S, or the Idle Start-Stop System, which automatically cuts off the engine when you’re stationary for a few seconds, and restarts it when you pull in either brake lever and open the throttle. But for the Maestro Edge 125, this is available only on the carburetted version, not the FI scooter.

The one thing that was sorely missing on the Maestro Edge 110 was the option of a front disc brake. The 125 now thankfully gets a 130mm front disc brake, standard on the FI and optional on the carburetted variant. And that makes this Hero MotoCorp’s first scooter with a disc brake. Linked brakes, or an Integrated Braking System (IBS) as Hero calls it, is standard on both the disc and drum versions. The brakes offer decent bite, but still need you to squeeze the levers quite a bit to bring the scooter to a halt quickly -- and feel, especially for the front brake, is a bit lacking. But we’ll have to get the scooter here in Pune for a proper road test to understand just how good stopping distances are.

Suspension components are carried over

The Maestro Edge 125 gets the same telescopic fork up front, and a rear coil spring from the 110. This setup soaks up bumps at slow speeds well. But while the setup is not stiff, the rear feels a little underdamped. So you get one bounce from the back when you go over a larger bump. With a 1261mm wheelbase that’s comparable to the Honda Grazia, as well as 12-inch front and 10-inch rear wheels, the Maestro Edge 125 feels nimble while darting through traffic while providing plenty of confidence. It even feels quite stable through some faster turns.

When it comes to the overall design, the 125 bears a striking resemblance to the 110, but there are a couple of striking differences. Firstly, the Maestro Edge 125 gets a triangular LED DRL on the front apron, and the tail light has some slightly tweaked finish. The other major difference is only found on the FI variant, which is available in two dual-tone paint schemes -- this white-brown that you see in these pictures, along with a black-red one which looks extremely distinctive.

Even the overall riding stance is almost identical to the 110cc version, with its tall handlebars and fairly low seat height of 775mm. This makes the overall ergonomics quite comfortable, and the handlebars won’t hit your knees while taking sharp U-turns even if you’re fairly tall. It’s very easy to get your feet flat on the ground as well, and managing the Maestro Edge 125 around a parking lot is a simple task. The seat too is generally very comfortable, not just for the rider but for larger sized pillions as well.

Hero has priced the base variant (carburetted, drum brake) of the Maestro Edge 125 at Rs 58,500. Considering all the features it offers, even in this variant, the pricing is really attractive. The mid-spec variant with the front disc and carburetted engine comes in at Rs 60,000, while the top end scooter with the disc brake and fuel-injection is priced at Rs 62,700 (all prices ex-showroom Delhi). Now, that last price is especially noteworthy because the Maestro Edge’s competitors are going to have a tough time matching that price point when they have to switch to FI to meet BS6 norms.

When you put all the updates together, the Maestro Edge 125 really has addressed all the shortcomings of the 110 quite well. That said, it’s not a perfect scooter by any means - we really wish at least the refinement was higher. But even with that, it somehow manages to appeal to not just your heart but also your head thanks to its brilliant value proposition.