The Maestro Edge 125 offers great performance at a great price. Is that enough for it to top the 125cc scooter space? 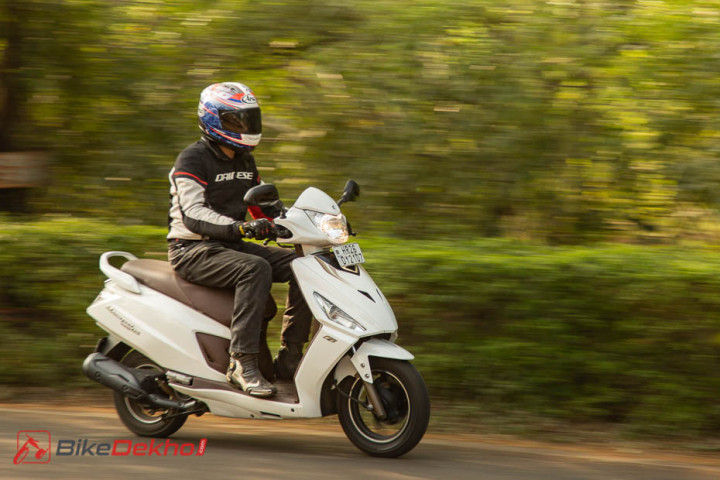 The Hero Maestro Edge 125 is the first fuel-injected scooter to be launched in India. We had a brief spin on it a few months back and were quite impressed by its performance and its apparently value-for-money proposition. But there are a lot of other boxes a scooter needs to check if has to claim the top spot in the premium 125cc scooter segment - things like practicality, efficiency and comfort just to name a few. Now that we’ve finally had a proper go at it on our home turf, it puts us in the perfect spot to analyse whether this Maestro really impresses in the real world.

One point to note: Hero offers the Maestro Edge 125 in a carbureted guise as well. But we’ll only be talking about the fuel injected variant in our review.

It looks the same as the 110cc Maestro Edge:

That’s quite surprising since the 110cc Hero Pleasure+ carries a different design language from the 100cc Pleasure. Ideally, that should have been the case with the 110cc and 125cc Maestro Edge as well. Both scooters have the same bodywork with subtle differences - the biggest of which is a new LED DRL on the apron. Oddly, the scooter has its front number plate holder placed above that DRL. So if you’re running one of those new taller number plates, the nifty looking Iron Man logo DRL will always be partially covered. It seems to be the problem with the overall design as well. The Maestro Edge 125 seems to be designed in parts and then put together. While parts like the front fender, apron and tail lamp assembly look good in isolation, overall the design does not feel cohesive.

It feels dated as the body-coloured headlamp visor looks mundane compared to the tinted visor the 110cc Maestro Edge gets. Even the new exhaust end can looks drab. Here, we think the one on the Maestro Edge 110 actually looks far better. The machined alloy wheel rims and contrast-coloured inner apron, floorboard and seat, as well as the panel under it, manage to give it a premium touch. However, this coloured trim is available only on the black and white colour options. But the brown trim on the white scooter is okay at best. The red trim on the black scooter is the one that really stands out.

It gets no additional features over its 110cc cousin:

The carbureted Maestro Edge 125 does get a start-stop system from the Destini 125 but the FI variant does not. That’s disappointing since one of its strongest competitors, the new fuel-injected Honda Activa 125, has this system. (read the new Activa 125 road test review here) It seems that Hero skipped this tech to keep the FI scooter’s price low. Thankfully, the Maestro Edge 125 retains all the features of its 110cc cousin and that includes a remote opening fuel filler cap and seat, both of which can be opened via the ignition key slot. It gets a semi digital instrument console that displays speed, fuel level, trip meters, engine check and side stand warning indicators. It’s packing a fair amount of features compared to other 125cc family scooters. But given that something like the TVS Ntorq 125 (Race Edition) is very similarly priced and offers more features, such as an LED headlight and a full LCD instrument cluster with Bluetooth connectivity, it really makes the Maestro 125 feel a little under equipped.

While the 124.6cc motor is the same as the one on the Destini 125, the addition of fuel injection allows for almost half a PS increase in power. The motor delivers 9.25PS @ 7000rpm and 10.2Nm @ 5000rpm. It offers good bottom end and mid-range acceleration which shows in the acceleration times. The Maestro Edge accelerates a shade quicker than the segment leader, the TVS NTorq 125 making it the quickest 125cc scooter we have tested. In the real world, it is the roll-on acceleration that matters. The speeds at which you try to overtake that pesky motorist in the city. In the 20-50kmph run, the Maestro Edge 125 is almost a second quicker than the Ntorq 125!

At city speeds, the Maestro Edge offers brisk acceleration and below 50kmph, you never find yourself wanting for performance. Another benefit of fuel injection is crisp throttle response. So every time you open the throttle you are not left waiting for the power to kick in. The strong bottom end also allows the scooter to deliver impressive fuel efficiency in the city. That said, the FI version gets a smaller 5-litre fuel tank compared to the 5.5 litres on the carburetted variant so there is a slight compromise on the range.

The 125cc scooter offers strong acceleration upto 80kmph post which it starts to taper off.

While the motor impresses with its performance and fuel efficiency, it disappoints with its lack of refinement. The motor feels harsh and buzzy. As the speeds rise there are a lot of vibrations on the floorboard, seat and handlebars. At slower speeds, it’s not so much of an issue. But open the throttle or ride past 60kmph, and the buzz from the floorboard starts getting really irritating.

It offers a comfortable city ride:

This 125cc scooter offers adequate floorboard space and a tall-set handlebar so unlike some scooters, your knees don’t bump the bars every time you take a sharp turn. The seat tapers down and narrows towards the front, which allows you to easily place both feet on the ground whenever you come to a stop. The upright riding stance makes it comfortable to ride over long distances. While the seat offers good support we would have loved the cushion to be a bit firmer like the one on the Suzuki Access 125. The pillion seat, while comfortable, could be longer.

The Maestro Edge 125 shares its 110cc cousin’s underpinnings, consisting of telescopic forks and monoshock and a 12-inch front/10-inch rear wheel setup. However, the 125cc scooter gets a front disc brake. The front disc and rear drum brake setup on the Maestro Edge 125 lacks feel almost to the point of being wooden. It does not offer strong bite eitheras well and that can be seen in the braking distance which is the worst among the 125cc scooters we have tested so far. Even the drum brakes-equipped Destini 125 manages to post better braking numbers.

Where the Maestro Edge 125 impresses is in the balance it offers between a comfortable ride and good handling. While the ride isn't Honda Activa 125 levels of plush, it displays impressive composure over a bad stretch of road. Being a scooter, the limited suspension travel does bottom out over a sharp ridge but the resulting jolt to the rider or passenger isn't jarring. The ride gets more comfortable with a pillion onboard.

At 110kg, the Maestro Edge 125 is one of the heaviest scooters in the segment. In terms of handling, it has slightly heavier steering than compared to other scooters in its class. But the steering feels quite direct and. It is very precise in the way it changes direction. And because of this, in city traffic, it is one of the easiest scooters to filter through traffic despite its wide stance.

Out on the highway, the scooter feels stable at high speed. It feels planted through a set of corners and affords you the confidence to tackle bends at speeds. While the overall handling can’t be described to be as sporty as that of the Aprilia SR 125 or the TVS NTorq, it’s still a pretty entertaining and involving scooter to ride around on.

The lack of engine refinement is one major flaw. That aside, the lack of fit and finish is another glaring issue with the scooter. Our test scooter had clocked less than 100km yet it had a rattling noise emanating from the front apron. This also extended to the switchgear. The horn button was already moving about, and half the time sat so far inside the handlebar cover that we had difficulty reaching the switch with gloved hands. Body panels like the headlamp cowl had large and uneven panel gaps. Not quite what you’d expect from a premium 125cc scooter.

Is it a worthy buy?

The Maestro Edge 125 has its set of strengths and weaknesses. BIts motor besides making it the quickest 125cc scooter around, its motor also offers good performance in the city and fantastic overall fuel efficiency. It offers an upright and comfortable riding position and a good balance between ride and handling. But then, the lack of refinement will tire you over longer commutes. And overall build quality, as well as fit-and-finish levels, are definitely sub-par for the segment.

If you are looking for a sporty scooter, the similarly priced NTorq 125 Race Edition is a better bet. It may be a shade slower but more than makes up for it with a better design, more features and much better handling.

The whole point of most “not-so-sporty” 125cc scooters is to provide a little extra performance, or shall we say, load carrying capacity and higher cruising speeds, without compromising on the more conventional aspects such as practicality, comfort and efficiency. The Maestro Edge 125 does tick those boxes. But the unfortunate problem is that its harsh motor, lack of build quality and odd design really hold it back from earning our recommendation, especially when you have really competent scooters, such as the Suzuki Access and the new Honda Activa 125, vying for the top spot in this segment. And if you want to know which is our real pick in this segment, then you’ll have to check out our comparison review HERE.