Does half the number of cylinders mean half the amount of fun? The Panigale V2 would not like you to believe so. 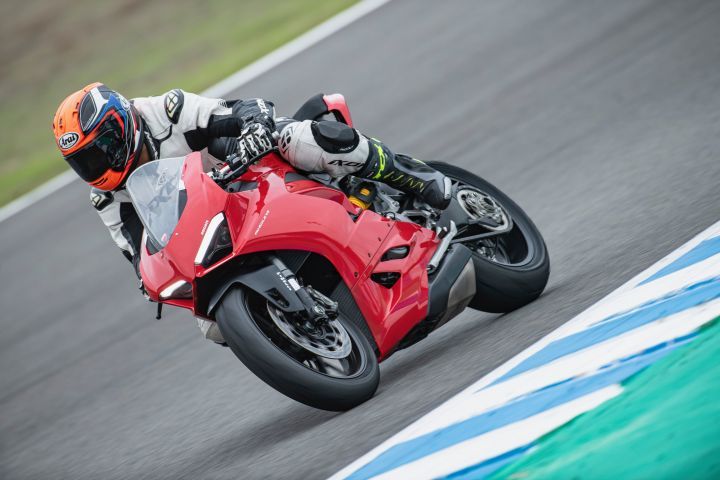 Motorcycles that are difficult to ride are unique challenges. And some people enjoy them. I remember riding the Speed Triple for the very first time at the racetrack and I just could not correlate what I felt to the glowing reviews from the British press. Then Siddarth Trivellore -- famously of the California Superbike School in India -- took the bike out and came back saying he loved it. I looked at him like he'd lost it. Which is my usual look for him, so he ignored it. Then I asked him how he could like something that unresponsive and obstinate. And he said, "Buddy, this isn't like other bikes. You have to grab it by the scruff of its neck and make it do the things you want it to. Then, and only then, it is super responsive." And what does that have to do with the Panigale V2? Allow me to explain.

I rode the Ducati Panigale 959 on multiple occasions including at the Chang International Circuit at Buriram in Thailand. And every single time, I came back exhausted. It was an extremely physical motorcycle, needing lots of work to ride hard. I was shocked when I was just as spent at the end of my first ride on the Panigale V4. But it quickly became clear that the V4 was causing fatigue through its enormous performance, down the straight, on the brakes and in the corners. The 959, by comparison, was far, far milder and inasmuch, it was a beast.

For 2020, Ducati is replacing the beast with this beauty. Say hello to the new Ducati Panigale V2.

Before we dive into the tangibles, let's quickly run through the context and positioning of the V2. Ducati's middleweight motorcycles go back 25 years or so. The 748 was regarded as a vastly better sportbike for most riders than the 916. Yes. The same held true for the 749 and so forth. More recently, the 848, 899 and the 959 have laid claim to the same warm feeling. Why? Well, the 916 was hard to ride. The chassis was unforgivingly focussed on the racetrack and for the time, the power was huge. Most riders would find the 916 impossibly hard to ride on the road and a massive challenge to ride at the track. This can be fun, but it's like going to the gym and discovering that your sparring partner always whips your ass.

But the big difference from the 959 to the V2 is the positioning of the motorcycle. The 959 was always the more accessible middleweight sportbike. But once the V4 arrived, the 959 was a distant second in the order of things. The V2 reimagines the Ducati middleweight as the top of the V-twin performance pile. A nod to both accessibility and the V-twin legacy of the company. Which makes me wonder if the Multistrada V4, due next year, will also do this - be super expensive and out of reach while the 1260 and its evolution continues to be the more popular model.

And now, let's see what they have done.

The changes to the engine are pretty straightforward, although the engineering was far from easy I'm sure. Ducati likes to say that Euro V (almost equivalent to BSVI) is an opportunity to further clean up combustion rather than the morass of extra weight and less power the most enthusiasts label is as. And they're as good as their word. The same 955cc liquid-cooled 90-degree V-twin now makes 5PS more as well as 2Nm more than before. And it meets the Euro V regulations too. Ducati has also managed to tuck the exhaust under the engine, removing the side-slung twin pipe that won them so many, errrrm... design awards on the 959. The engine has seen some tweaking to the intake paths, and now Ducati runs two injectors per cylinder, one on either side of the butterfly valve to further control the efficiency of the combustion. Other changes include the new up and down quickshifter.

The engine, of course, is the centre of the bike in more ways than one. On the V2, the engine is most of the frame. At the front is the innovative monocoque that's both structure and airbox. No changes anywhere here. But the bike uses a 2mm longer Sachs rear monoshock, still side-slung and still fully adjustable. At the front, the forks are fully adjustable Showa Big Piston USD units but they sit higher in the triple tees. This cuts trail by 2mm and adds one per cent more weight to the front wheel. In essence, the V2 is tipped a little bit more on its nose while retaining the same ergonomics triangle as the 959.

And all that is wrapped up in the beautiful bodywork from the V4. It isn't the exact same fairing, of course. It's a close facsimile and the V2 is great looking, but also narrower overall and very, very delicious to look at. Ducati will offer the single-seater tail as an accessory to get it to look even closer to the V4. There's even a new single-sided swingarm that shows off the new wheels.

To experience the V2 in its element, we were invited to the famous Spanish racetrack, Jerez. A fast track with lots of fast corners.

And to complete the experience, the bikes we rode wore the top of the line SuperCorsas, essentially slicks with grooves. So the road bikes will have slightly less grip but their tyres will last a lot longer. Of course, there was rain predicted and eventually, we had to switch to Pirelli Diablo Rain tyres, which apparently, are the exact same spec as the World Superbikes' wet weather tyres. Um, okay, no pressure.

The first session was spent in the dry, just learning the layout of the Jerez track. And the V2 was wonderful in these conditions. At the moderate speeds I was going, it immediately felt natural and friendly to ride, despite the lack of smoothness that comes from working out the corners. The journalist I was sharing the bike with, an old Jerez hand, had set it to Race Mode with Traction Control at 2. I only raised the TC to 4 just to be safe and never felt the need to make any other changes, which is a huge compliment to the invisibility of the electronics. Especially, given that he was happy to leave it in TC 4 saying it didn't seem to affect his riding at all.

The second session was when it came together. The knee slider started to suffer and the smile inside my helmet grew wider. Turns three through five are beautiful! You tuck the bike through two fast lefts before setting up for a fast-fast-fast right, which is has a crest and hides the exit from you. The run to turn six is long so speed coming out is essential to a good lap. Similarly, Turns 7 onwards, right to the last corner is another set of fast turns, all of which challenge you to go faster if you can, throwing a rather narrow strip of tarmac into your view. Trust in the motorcycle is of the essence.

And the V2 is utterly, beautifully, wonderfully worthy of the trust. The small tweak to the chassis setup transforms the Ducati into a responsive, light-feeling motorcycle that changes direction fast and easy with loads of feedback to assure you of grip as well as compliance. It retains that stable and confident style once you're leaned over and there is enough cornering clearance for some very serious angles despite the pegs being more forward and lower than the V2. Lovely!

Once you start opening the gas, the torque comes on progressively harder. The quick-spinning nature of the 955cc twin has not been tempered even a little bit by the emissions and the quickshifter is effortless. This is marvellous! The quickshifter is a bit too sensitive for me, though. I did manage to trip it up down the straight shifting from second to third a couple of times -- I think I rolled off the throttle or something by just a fraction.

The weakest link and not by a huge margin, if at all, are the brakes. The Brembo M4.32s are excellent. But at the track, the lever felt a little long and I think the M50s would probably suit the idea of ultimate V-twin performance machinery more than these. That said, the brakes never felt weak or wooden. They're excellent, but I think Ducati could have done better.

And just as things began to settle in, it started to rain.

When we went out again, I was shocked to find my confidence -- despite the utterly unfamiliar feel of the rain tyres -- coming back in leaps and bounds. All I changed was the riding mode to Sport and TC up to 7. Around me, experienced riders were knee-down in the wet and I know I went faster every single lap of the two 15 minute wet sessions before we wrapped up for the day.

At first, I thought that the blasted rain spoilt my day.

But I later realised that difficult conditions, like hard motorcycles, are a unique challenge. And while I struggled to learn the track and then relearn its feel in the wet, the V2 didn't. The 959 was already an extremely accomplished middleweight sports bike. But with a little more power and some very minor suspension magic, Ducati has elevated the V2 into something truly special. This is, by me, the best middleweight sports bike on Earth money can buy in July 2020. The date is there only because that's when we expect Ducati India to bring the Panigale V2 to India.

The V2 was easy to ride hard, confident and simple. In that sense, it's exactly like the V4. The V4 has brutal power and that's usually what you struggle to wield. The V2's performance is serious but it's delivered with a calm progression that will allow you to make friends with it rather than spar with it. That, to me, is exactly what a motorcycle like this should do for riders ascending the performance pyramid.

Ducati India tells us that despite having the IMU-equipped electronics suite from V4 -- the entire thing save for maybe two features -- and all the other stuff, the V2 is likely to arrive at the same price as the outgoing 959 in mid-2020. Keep an eye out for the V2. It's special. It's special because it does what you want it to do without you having to grab it by the scruff of its neck. It's not your sparring partner. It's your friend.