The V2 looks absolutely immaculate in the new white wash paint scheme with subtle red accents that retain its devilish intent. Check out the new livery via detailed images 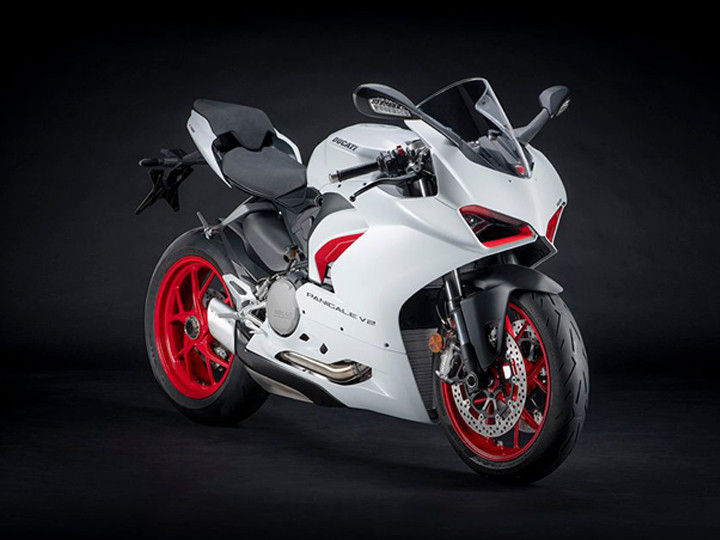 The Panigale V2, which will soon replace the Panigale 959 here in India, was launched overseas less than a year ago. A teaser video released by Ducati India also suggests that the baby Panigale isn’t far away from its official launch date. It features a new design inspired by the monstrous Panigale V4, new features, more power and truckloads of electronic rider aids. The bike looks absolutely stunning in the traditional Ducati Red paint scheme but looks even more tasteful in White Rosso. It’ll also help enthusiasts differentiate the V2 from the V4 more easily. We’ve compiled a number of detailed images that gives you a closer look at the new paint scheme, so keep scrolling.

But it’s not all silky smooth. The Panigale V2 also showcases its devilish intent with contrasting red highlights around the air intakes and exhaust vents. The former channels airflow into the engine and radiator while the latter directs hot air away from the engine.

The wheels get the same racing red treatment which lays emphasis on the bike’s racing pedigree.

More importantly, the positioning of the V2 badge has now been moved to the lower half of the fairing and looks more pronounced thanks to the larger font.

Apart from the new livery, the V2 remains unchanged.

The V2’s ergonomics has been revised for improved rider comfort. The front seat, for instance, is all-new with a thicker foam (5mm more) that offers better longitudinal movement. It also gets a pillion seat as standard, the only model to do so in the Panigale range.

The V2 comes with an under-belly exhaust with a single compact exhaust end can which replaces the double barrel unit seen on the 959.

The tweaked chassis on the V2 makes it more agile, says Ducati.

The double-sided swingarm from the 959 has been swapped out for a sleeker single-sided unit on the V2.

In terms of hardware, the V2 uses the same fully adjustable 43mm Showa Big Piston Fork (BPF) and Sachs monoshock seen on the 959.

A pair of 320mm discs mated to radially mounted Brembo Monobloc M4.32 calipers and a single 245mm disc brake at the rear bring the bike to a halt.

Its 17-inch alloys come shod with Pirelli Diablo Rosso Corsa II radial tyres measuring 120/70 up front and 180/60 at the rear.

Expect the Ducati Panigale V2 to be priced between Rs 15.50 lakh and Rs 16 lakh when launched in India.