Could this Ducati be the dot that connects the Panigale 959 to the Multistrada 950? 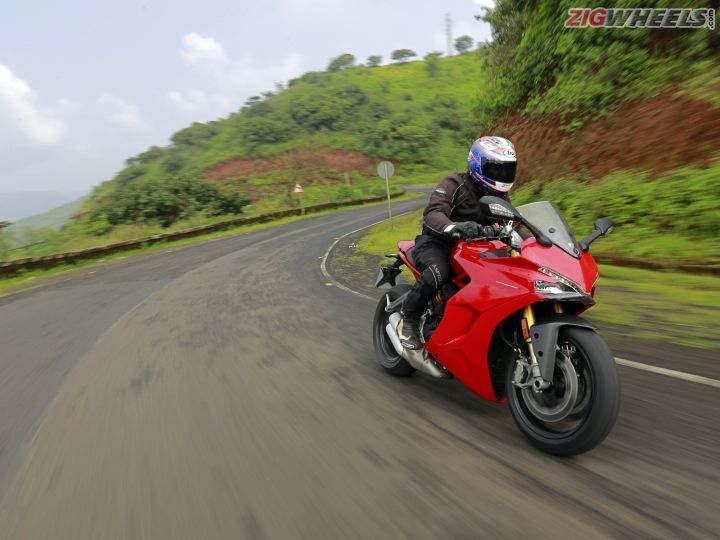 Imagine a swiss army knife which is sharper but with one less attachment. That pretty much sums up the new Ducati SuperSport S. This is Ducati’s sports bike for the road. One which you can ride on a daily basis, go corner carving, go touring and also do the occasional track day. We spent a few hours getting intimate with Ducati’s newest sports bike and here’s what we think.

Attention grabber:
Ducati intended its new sports tourer to be more like the Panigale than the Multistrada. The design follows the same ideology and what you see could be mistaken for a 959 Panigale if it were not for the LED DRL line flowing across the front, above the headlamp. The headlamp is a simple halogen setup and the entire assembly vaguely resembles an X. It is the most striking feature of the bike. Atop sits an adjustable windscreen. Below it is a full LCD instrument console that looks like a floating unit due to the fairing that wraps into the tank. A neat design which would look better with black, instead of silver surrounds.The sharp fairing has clean lines courtesy the hidden fairing screws and hides most of the front frame and the motor’s front cylinder.

The small twin vertically stacked exhaust is nice and compact and does a good job of exposing those beautiful rear alloy mounted on the single-sided swingarm. The 16-litre fuel tank looks similar to the 959 Panigale when viewed from the side, but is narrower near the seat section. The one-piece seat too is narrow at the front allowing you to place both feet on the ground with ease. This comes with a removable rear seat cowl- standard on the SuperSport S and optional on the base SuperSport. The tailpiece is a lean unit that encloses a simple rectangular LED tail lamp. The only part of the design we did not like was the large gap between the motor and the fairing, to allow better engine heat dissipation.

Overall, the bike manages to grab a lot of eyeballs and a few catcalls as well.

Loaded?
The SuperSport S also gets top-spec Ohlins suspension and a bi-directional quickshifter. The base SuperSport makes do with fully-adjustable Marzocchi forks and Sachs monoshock damper. The SuperSport S we rode had the Sports pack that includes a front carbon mudguard, adjustable clutch and brake levers, CNC machined front and rear brake reservoir caps, carbon fibre finish tank pad, and slim LED rear turn indicators. This kit costs Rs 51,395 plus tax. Ducati also offers an Urban and Touring pack for the SuperSport. They also have hard panniers which clip on into a slot in the tailpiece. Together, they can hold 50 litres of your belongings and cost Rs 77,220 plus tax. Then there is an option of an Akrapovic carbon slip on exhaust (Rs 69,560) or a Superleggera style twin underseat Akrapovic exhaust unit that’ll set you back by Rs 1,54,354 plus tax.

Specs?
Partially nestled inside the fairing is a revised  937cc Testastretta L-twin motor from the Multistrada 950. It makes 113PS at the crank at 9000rpm and 93Nm of torque at 6500rpm. 80 per cent of peak torque is accessible from as low as 3000rpm and 90 per cent of torque is available in the 5000 to 9000rpm range. Electronics include eight-stage traction control system and three riding modes: Sport, Touring and Urban. ABS comes with 3 levels of intervention.

The front trellis chassis is bolted to the motor which itself is a stressed member. The immediate benefit is a lighter weight; the SuperSport weighs 210kg (kerb). Suspension components for the SuperSport S include a fully-adjustable 48mm upside down Ohlins front fork and a fully-adjustable Ohlins rear monoshock. The dual 320mm front disc brake setup gets radially mounted Brembo M-4-32 monobloc calipers, while the 245mm rear disc is clamped to a two-piston caliper. The Pirelli Diablo Rosso IIIs work well on road and are game for a few track sessions as well.

How is it to ride?
To make the SuperSport more street friendly, Ducati has focused on areas like ergonomics and rider comfort. Better ergonomics comes via a more comfortable and upright riding position. The SuperSport S gets raised clip ons and lower mounted foot pegs which have you hunch a lot less. The riding position sits between the 959 Panigale and Multistrada 950. Sporty yet comfortable.

Despite the 810mm seat height similar to the Panigale, it is easier to place both feet on the ground due to the narrower seat profile at the front. The instrument console is angled well for a clear view though it feels cluttered. The front windshield is adjustable but how it performs will be answered after a comprehensive road test. Fire it up and the bike settles to a nice bratty thrum. This bike sounds good, especially in Sport mode with the engine burbling on downshifts. The optional Akrapovic system would clear up a few more vocal chords but the stock system works as well.

The liquid-cooled L-twin motor makes most of its torque low down the rev range and delivers it in a linear manner. It has a strong mid-range that starts post 5000rpm and goes on past 9000rpm. 80 percent of torque is delivered post 3000rpm in a sedate manner and there is no shove like you would expect from a V-twin. The bike feels tall geared and this eats up a bit of that immediacy in throttle response. It is a quick motor but misses out on that manic urgency we love in a Ducati motor.

The bi-directional quickshifter works seamlessly at high revs. While downshifting at low speeds though, you need to make sure the throttle is fully closed or the bike lurches forward. Clutchless shifts also feel abrupt at low revs.

It makes the performance more accessible to newer riders, though, and easy to ride in traffic as well. In Sport mode, you get the full 113PS with a more aggressive map with traction control at 1 and ABS at 1 being the default setting. The bike is quite manageable in the twisties in this setting but can get hairy on wet roads. Thankfully, you can individually adjust traction control and ABS settings irrespective of the rider map. Touring gives you full power, but with softer throttle response and DTC at 4 and ABS at 3. Urban mode is meant for city riding and drops power to 75PS with DCT at 6 and ABS at 3 as the default setting. We, however, preferred the Sport mode for the twisties of Lavasa.

The Ohlins live to their name and deliver a fantastic balance between ride and handling. With the setup slightly on the stiffer side, the Supersport S’ suspension at low speed-soaked uneven patches and small potholes being caught out only by sharply ridged potholes and small speed breakers. Ride improves with speed and the Supersport loses composure only on sharp ridges, resulting in the front skipping a bit. The front end feels a tad heavy to steer and needs some getting used to. This is an immensely flickable bike, though, eager to dart into corners so much that sometimes you have to dial it back a bit. The Pirelli Diablo Rosso III offered here is built for road use with the occasional track outing.

They sit just below the super sticky Diablo Rosso Corsas the 959 Panigale come fitted with. These radials offer good grip, but breaking traction with a bit of naughtiness isn’t too difficult either. Brake too hard, or whack open the throttle mid-corner and you’d get away with these rookie mistakes on the other Pirellis. Here, however, you need to be more smooth. Rain soaked roads also had the rear squirming quite a bit under acceleration. The Brembo M4-30’s offer lots of brake feedback, especially from the rear brakes. They offer good retardation but lack the immediacy of the Brembo M50s that we have been spoilt silly by. Overall, the SuperSport S is one of those rare bikes that is easy to ride fast.

City riding in Urban mode needs some getting used to as you have to account for the lack of horses and the lag in throttle, courtesy the heavy DTC intervention. Once accustomed to it, scything through traffic is as effortless as riding a Yamaha R3. Also, thankfully, it does not heat up as much as other Ducatis. The riding position is slightly on the sportier side, though it is comfortable and after a few hours of riding the bike hard in the twisties of Lavasa and in Pune traffic, we were none the worse for wear.

Thoughts?
This has to be one of the most effortless Ducatis we have ridden. It is surprisingly easy to ride in a hurry, requires little inputs in traffic and is a bike you can live with on a daily basis. Like a Multistrada. Obviously it can’t go off the road like a Multistrada, but it is sharper and dynamically more capable. This is a bike for a rider who likes the idea of versatility of a Multistrada, but would rather invest his money on a supersport and would spend most of his time on tarmac rather than off it. It looks aces and would easily pass off as a Panigale. It is also easier to ride fast without worrying about killing your neck and back as you would on a 959. It is as easy to ride in traffic as a 250cc bike and does not throw tantrums like most large capacity motorcycles do when ridden at crawling speeds. The seat is comfortable, the mark of a good tourer. We expect to be able to spend a few hours on it without bother. At Rs 13.39 lakh (ex-showroom Delhi), it sits comfortably between the two. Ducati’s sports tourer comfortably bridges the gap between the Multistrada and Panigale and easily offers the best of both worlds.