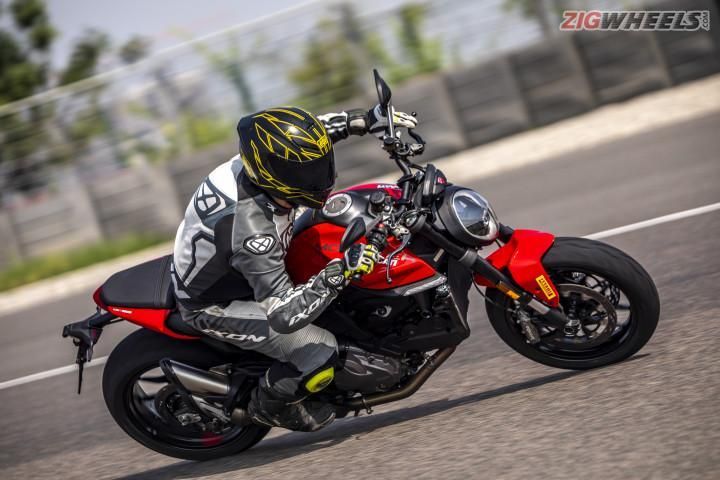 The Ducati Monster has often been regarded as THE motorcycle that saved the Bolognese manufacturer. It was a motorcycle that started out in life as a collection of parts from different Ducatis of that time and became quite a hit with enthusiasts globally, creating a whole new genre of enthusiast motorcycles. Having said that, the last couple of iterations haven’t been runaway successes, the 821 in particular a bit too bland to carry the Monster name. Hence, to carry forward the iconic name, the Monster had to undergo a massive makeover, one that has raised quite a lot of eyebrows. Is the 2021 Monster back to being a true Monster then?

The Varese Influence
To the hardcore Ducatistis, the new Monster is quite blasphemous. No steel trellis frame to show off its muscles, no large round ‘bison back’-shaped fuel tank and not even a proper circular headlamp -- these are quite a lot of design changes to soak in. It just feels weird to call it the Monster, especially since it looks quite a lot like its Varese cousin, the MV Agusta Brutale 800.

The sharp tank extensions are quite KTM 790/890 Duke-like. When looking at its rear from a certain angle, the tail section also does remind you a bit of the Triumph Street Triple. But all of this comes together to produce what is still a striking design. While this design might be controversial, it does manage to be more eye-catching than the older 821 and 797, the likes of which might not have warranted a second glance. Yes, it still has a few quirks that need to be addressed, like the left profile that looks quite chaotic when compared to the right, and the lack of a belly cowl that makes the design seem a bit incomplete. Nevertheless, this bike will still grab a tonne of eyeballs wherever you take it.

Fancy Bits From The Parts Bin
All-LED lighting is now pretty much a norm in this segment of motorcycle, and the new Monster doesn’t disappoint. The dynamic ‘sweeping’ front turn indicators have been neatly integrated into the panel above the frame and clearly have an Audi influence.

The dash has been inspired by the TFT console of the Panigale V4. The layout is quite legible and bright enough to read in all lighting conditions. This command centre is operated via relatively simple switches on the left side of the handlebar. Toggling through the settings, even changing the ride modes on the fly, is intuitive enough. And the console can be accessorised with the Ducati Multimedia System, allowing a host of connected tech to be displayed and controlled on the go.

Fit As A Fiddle
For 2021, the Monster was put under a strict diet regimen. Ducati engineers have worked tirelessly to shave off 18 kilos of dry weight, and that’s mighty impressive. Here’s how each element has contributed to the weight saving:

Now, the motor here is the same 937cc Testastretta L-twin engine from the Multistrada V2, the SuperSport 950, the Hypermotard 950 and the soon-to-be-launched Desert X. The naked gets a dedicated tune with 111.5PS and 93Nm on tap. It gets a six-speed gearbox with a hydraulic slip and assist clutch and a whole lot of electronic rider aids.

As Advertised #JustFun
Now this is a motor that I’ve fallen in love with every time I’ve experienced it in each of its forms. It was quite a charming engine on the SuperSport, and a bit hairy on the Multistrada 950 S. However, on the Monster, it is, as the tagline suggests, just fun. The wave of torque after 3000rpm is highly intoxicating. The oodles of mid-range grunt allows you to get away with riding a gear higher around the twisty section of the BIC.

The power tapers off slowly post 9000rpm and you pretty soon reach the 10,000rpm rev limiter. What you will appreciate highly is the linearity of the power delivery. The connection between your right hand and the engine is incredible as it responds to every minor throttle input. It still has the typical gruff Ducati L-twin vibe, but that never becomes bothersome. And the rorty L-twin exhaust note is just marvellous.

Since we had access to the twisty back loop of the BIC, we didn’t quite do a lot of ‘sensible’ riding. Still, when we did have to enter and exit the pitlane in an orderly fashion, the motor was fine with maintaining a commuter-friendly 45-50kmph in third cog.

Smart AF
Ducatis are quite loaded when it comes to electronic rider aids and the new Monster doesn’t disappoint. For its class, it has perhaps the most comprehensive suite of electronics. Three riding modes (Urban, Touring And Sport) are fully-customisable, allowing the rider to choose his/her preference of the throttle map, traction control setting, wheelie control setting and ABS intervention levels. Also, all of these aids are IMU-guided.

For our first experience session, I stuck the bike in Touring mode, which provides access to everything that the engine has to offer but presents them all in a softer manner. The throttle response is smooth, traction control is lenient but lets you know it is working along in the background and the front end of the Monster remains planted.

As my confidence grew, I switched it to Sport and even customised the settings to offer the least possible intervention without actually turning off the aids. Here’s when the Monster’s beastly instincts kicked in, turning this loving pupper into an attack dog. It likes to be ridden fast, it doesn’t mind being abused a little and will reward finesse. Even wheelies (when Wheelie Control is set to 1) are controlled and never heart-stopping.

A special mention must be made to the bi-directional quickshifter as nobody does quickshifters quite like Ducati does. Every shift is positive, precise and rapid. It works flawlessly nine times out of ten and even on the tenth attempt, it is more likely that the rider’s inputs weren’t exact enough to trigger the pressure switch properly.

Slim And Accessible
The 821 was particularly bulky and its riding position a tad forward-arching. Ducati engineers have seriously revised the ergonomics to offer a more balanced ride. Hence, the controls are 70mm closer to the rider, the footpegs have been pushed 35mm rearwards and lowered by 10mm and the slightly lofty 820mm seat height doesn’t seem all that intimidating thanks to a rather slim midsection.

The latter bit was possible thanks to the new Panigale V4-derived front aluminium monocoque frame that tapers towards the seating area, allowing shorter riders to easily flat foot the bike. And if you do find it a bit tall for your liking, Ducati will sell you a low seat option that drops the seat height down to 800mm and with a low seat + low suspension kit, the seat height can further be dropped to 775mm. Lastly, the neatly redesigned tank recesses allow the rider to straddle the bike well.

The Monster’s slimness and lightness aided its hooning spirit, with enough leverage at the bars to hunt down apexes. These changes will come in handy in the urban jungle too.

By ditching the trellis for the monocoque frame, Ducati has managed to bring quite a few of the Panigale’s great handling characteristics to the Monster. It is mind-blowingly agile, extremely precise to steer and composed enough to carry pretty high corner speeds. It will never overwhelm you and even when you screw up, the Monster tells you, no worries, I got your back. This particular trait makes the Monster extremely forgiving and highly rewarding.

The one thing I would have appreciated, though, is adjustable suspension. The stock tune is a bit soft and focused for street riding. Even with the preload dialled in a bit more, the plushness was apparent, especially when exiting hard out of the slow corners. It wasn’t wallowy but had there been adjustable suspension, an experienced hand would be able to set it up to their liking. However, for someone for whom this will be their first middleweight naked, it will be a very long time before they start to reach the limits of this suspension.

The Monster runs on Pirelli Diablo Rosso 3 rubber. These sporty road-focused tyres held their own pretty well. Even after two whole days of track fun, the tyres had quite a lot of life left in them. At the press test, only the most experienced riders were able to find the limits of traction, and that too towards the end of day.

Braking performance was sure-footed and precise, which is what one hopes from Brembo. The M4.32 monobloc calipers are a reasonable fit for the bike’s capabilities as they seemed to complement the Monster well. The Brembo radial master cylinder lets you know just how much brake force you have exerted and can be modulated quite well. If you feel a little courageous, and are in a safe environment, turning off the ABS intervention at the rear leads to small and controlled slides.

Monster Indeed
Ducati has struck gold with the 2021 Monster. Historically, the Monster might have been the bike that saved Ducati but now since it doesn’t have to carry that pressure on its shoulders, the Monster is able to flex its muscles once again to make up for what was missing in the last few iterations.

Yes, the Rs 10.99 lakh price tag is a bit on the higher side and the lack of sophisticated hardware feels like a bit of a miss. And it might now look like any other Monster of the past, but it doesn’t need to. Ducati has turned the page and this new chapter of the naked is amazing. It is such a sweet machine that I will go out on a limb and suggest that this can be a great first big naked. You can skip the current crop of 650s and directly jump onto the Monster, something that can’t be said for some of its rivals, especially for newbies.