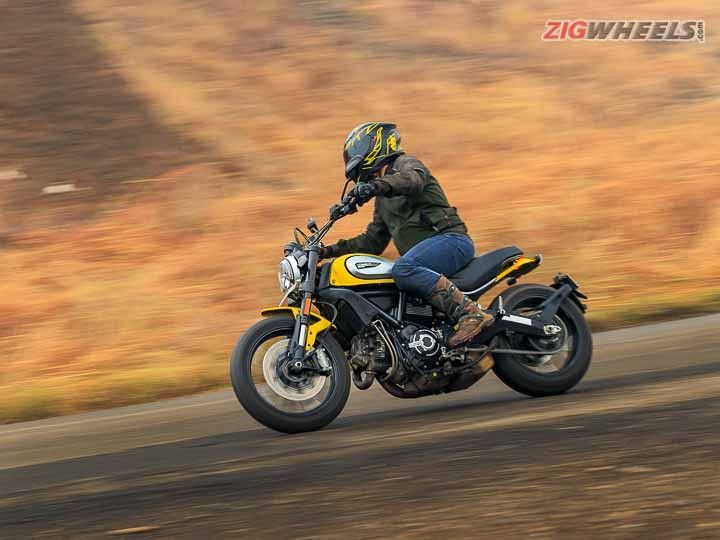 As painstakingly beautiful and fast as the likes of the Panigales and Multistradas are, Ducati’s most important bike, the one that actually sells the most and has managed to keep the company alive, is the Scrambler – namely the Scrambler Icon. In January 2021, Ducati stated that it sold 9,265 units of the Scrambler series in 2020, with a majority of them being the more affordable Icon variant. That’s quite commendable, considering the world was going through a pandemic.

The Italian marque took a fair bit of time to update it to BS6 specs. A handful of engine tweaks were necessary for it to pass the more stringent requirements. So how much of the ‘Joy’ that Ducati promises has been diluted?

Torque Loss? Really?
In order to make the 803cc L-twin air-cooled mill EU5-/BS6-compliant, Ducati had to compromise a bit on peak torque, going down from 67Nm to 66.2Nm. Max power rating of 73PS remained the same.

There’s no noticeable difference with the way the Scrambler puts down its power. The highly torquey nature of the L-twin motor means you can pretty much enjoy riding the wave of mid-range grunt, both in the city and on the highway. It does like to be ridden a bit spiritedly, its Ducati genes necessitating you remain focused on your local grocery runs.

It isn’t demanding by any stretch of the imagination. It grumbles a bit if you short shift and try to trundle along in the higher gears at low speeds. It also doesn’t want you to rev it all the way to the redline. What the motor wants is that you keep a good pace and it will oblige happily. During my commute, I found the Scrambler to be the happiest at around 60-65kmph in 5th gear in the city. There was enough torque on hand for me to make quick overtakes without necessitating a downshift.

Where things got uncomfortable is during stop-go traffic scenarios. Given that it is a large air-cooled mill and the exhaust has been routed in such a way that your right leg bears the maximum brunt. It doesn’t like to crawl around either. The hydraulic clutch isn’t the lightest and while it is easier to operate than the older cable-actuated one, it still requires some effort to operate smoothly.

Out Of The Urban Jungle
While it is very much an urban motorcycle, the Scrambler Icon continues to impress us on the highway and even in the twisties. It cruises nicely at 120kmph, with just a hint of gruffness felt at the pegs. You can expect a fair bit of wind resistance as you end up sitting in a very upright chest-out stance.

The handling of the Scrambler remains neutral and fun. You don’t have to hustle the bike into corners, just a little tug at the bars and it leans nicely. The wider Pirelli MT60 rubber doesn’t like to be pushed a lot and you would be better off taking things smoothly, after all it is a retro roadster and not a thoroughbred naked. The tyres slip and slide a little but there’s never a heart-in-the-mouth moment of you losing mid-corner traction.

Ducati claimed to have made the ride a bit more pliant by softening the KYB suspension. While that might hold true for European roads, on most of our roads, I found the ride to be a bit reactive. It did not get to the point of being jarring, though. Over small rumble strips and minor bumps, the suspension is still quite firm and doesn’t completely absorb the imperfections. Over the larger stuff, you have to be careful. The monoshock has a tendency to kick back rather sharply, unsettling the ride and also possibly tossing you off the seat. A softer tune for Indian roads is what we would definitely like to see on future updates.

Braking, from the single front rotor, remains sure-footed and confidence-inspiring. The ABS isn’t too reactive, intervening in a progressive manner.

Ticket To Being A Ducatisti
Prices for the Scrambler commence at Rs 7.99 lakh (ex-showroom) for the Icon Dark and this iconic ‘62 Yellow’ shade costs Rs 50,000 more. For the money, you can get quite a few more exciting and purpose-built motorcycles. Where the Scrambler excels is that it can be your gateway into the world of Ducati. For someone who is stepping into the world of big bikes, this is just as good a Ducati as is the Monster. However, the latter costs Rs 3 lakh more and that is quite a big ask for someone to stretch their budget.

The essence of a Ducati motorcycle still exists on the Scrambler: trellis frame, L-twin engine and Desmodromic valves. The accessibility of the Scrambler is what makes it a hit, and it still has a wild edge that one associates with Ducati motorcycles. And if that isn’t good enough to hook you onto the brand, there are some more serious versions of the bike that will do a better job.