Can the new 250s recreate the Pulsar magic? 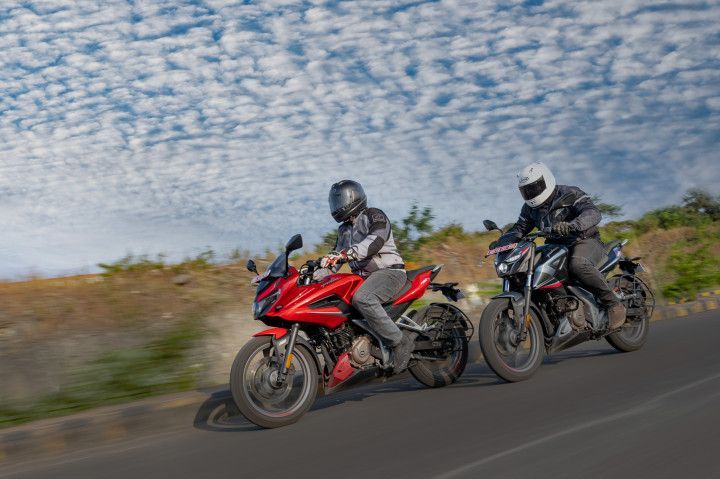 The crystallisation of the idea that is the Pulsar has been the 220F. When it was launched, its combination of muscle, technology, and the wow quotient made it an icon. Unsurprisingly, the air surrounding the new Pulsar F250 and N250 is heavy with anticipation and questions. The Pulsar flame that burst alive twenty years ago has been a bit dim the last few years. The KTM-derived Pulsars, sophisticated and racy, strayed away from the classic Pulsar formula. So, will the 250 twins, having decisively moved away from the KTM path, reignite the Pulsar magic?

A quick glance at the F250 tells you that it is a continuation of the 220F’s formula. Like the legendary Pulsar 220F, it sports a half fairing combined with the projector headlamp, albeit with ultrabright LEDs. The large fairing-mounted mirrors, another 220F trademark, feel sturdy and are useful too.

There are modern touches like the floating panels for the front mudguard and the belly pan, giving it a sense of raciness. This Pulsar seems to draw from other siblings too, the way the extensions flow into the tank seems very NS and the flared panel around the seats reminds us of the Dominar. The stubby exhaust adds some mass to the otherwise slim rear.

The Pulsar 250s are available in two colours at launch: grey and red. The red looks lustrous, but you will wonder whether paint quality has gone wrong because of the decals that add darker hues across the face and the side panels. The mesh textures in the tank extensions and side panels clutter the look further. The F250 could have been cleaner, which is the case with the N250.

Yes, the N250’s face seems to have taken inspiration from Yamaha’s MT15; when compared to the F250, it loses the fairing and the projector headlamp sits exposed in the facia with eyebrow-like LED DRLs replacing the boomerang type DRLs on the F250. The naked has fewers plastic panels, as the fairing is missing, and as a result the decals are less obtrusive. The tank extensions are truncated too, which cuts down on the mesh usage.

The lack of a fairing helps the N250 show off the “infinity” instrument cluster very well. It is a simple display with telltale lights, an analogue rev counter and digital speedo from left to right. The digital display packs a gear position indicator and distance to empty. But there’s no bluetooth connectivity, no turn by turn navigation or connected vehicle tech. Instead, there’s a USB charging port on the tank.

In terms of fit and finish too, these Pulsars were disappointing. The black surround for the fairing extends onto the tank sat unevenly, the panel gaps for the fairing panels were inconsistent and there were scuff marks on the headlamp fascia of all the N250s. Bajaj says that these issues will be addressed shortly. So while the Pulsar has been modernised, it is not exactly modern and the wow quotient isn’t setting new benchmarks.

What’s back with the 250s is the classic Pulsar formula. These Bajajs use an air-and-oil-cooled 2-valve, single-cylinder engine that uses 249cc of displacement for its wow quotient. Bajaj says they didn’t use triple-spark tech here as meeting BS6 norms reduces the lean air-fuel mixture combinations which the triple spark setup leveraged. There are no ride modes here either. But it is an all-new engine, sitting 10 degrees from vertical compared to 20 degrees on the P220F. It also has an offset crank and bush bearings for the balancer shaft to improve efficiency and refinement. Impressively, the engine makes as much power as the NS200 - and its 21.5Nm of torque is the most we have seen on a Pulsar till date.

On the road the sound, the sensations and the performance are oh-so-220! The sound and feel of the engine has a touch of mechanical rawness. No, it isn’t rough! There’s just a bit of a pulse and roar that makes it feel very Pulsar. As promised the engine has a lot of grunt - which means you can leave it between 3000-4000 rpm for all your city duties. In 4th gear it will pull from 25kmph easily. Unlike on most engines where torque drops off sharply after hitting the “peak”, Bajaj claims 85% of max torque is even available after that, and as a result it does feel responsive; even with a pillion on board the Pulsar lets you run a higher gear without stuttering.

Yes, the Pulsar has only five gears but performance isn’t lacking, so if you are planning to do long distances even with a pillion you'll find it lets you relax on the highway as well. With 14 litres of tank capacity and a claimed fuel efficiency of 39 kmpl you’ll get usable range on the highway too. The F has better wind protection for highway use, making it the better all rounder. But both are on par in other terms.

Along with the performance, it's the practicality of the Pulsar that has made it so appealing. Its 795m seat height lets 5’6” riders like me put both feet down flat, especially because it feels slim. The rider and pillion are treated to well padded, spacious seats too. While these are split seats, the pillion won’t feel awkward as the seat is just slightly higher than the rider’s.

On the bike, the rider still feels like he is sitting “on” the bike rather than “in” it. The N250 has a slightly sporty seating position as the tubular handlebar is wide and farther away from the rider. Incredibly, the clip-on handlebars on the 250F are higher and closer to the rider, offering more upright, friendlier ergos for commuting. Go figure.

The Pulsar gets 37mm telescopic forks up front, just like the Dominar, and a monoshock at the rear which offers 130mm of wheel travel. In terms of size, the tyres too are larger than the 220F’s, and are a match for the NS200. This setup was taut, not plush; but it soaked up bumpy concrete roads without a hiccup.

The braking hardware has been uprated too, offering 300mm discs at the front and 230mm discs at the rear. But the massive miss on the Pulsar is the lack of dual channel ABS, even as an option!

While Pulsars are meant to thrive on the street they should be able to hold their own on the track too. The grittiness of the new Pulsars will be tested thoroughly on the track because they will have to make the most of less.

Unlike the NS, its frame isn’t a perimeter frame. Instead it uses a tubular frame with the engine as a stressed member. While this helps save weight it is stiffer than the NS for the most part!

The engine, while the largest and the most potent for any Pulsar till date, isn’t quite the top dog in its segment. The more expensive Suzuki packs more tech, performance and wider rubber, while being a bit lighter.

The Yamaha FZ is less powerful but much lighter and it also boasts of wider rubber. Despite having wheels that are 500 grams lighter than the NS, and a lighter frame, this Pulsar is heavier than its competition. Conversely, the name Grimeca doesn’t carry much weight at first as it is a new brand of brakes from Endurance.

Furthermore, Zig’s VBOX tests clocked the Pulsar going from 0-60 in 3.9 seconds, and 0-100 in 10s flat! Incredibly this too is faster than Bajaj’s claimed time of 11.9 seconds! To double check, we did multiple runs and the Pulsar consistently clocked the run in under 11s!

The Grimecas earned their stripes too as they stopped from 100kmph in a tidy 54 metres! However, the feel at the lever was inconsistent and kept you from relying on them blindly. The tyres from MRF offered good grip too, allowing you to up the pace with confidence.

On the track, the F250 cut through the air better and the added weight also made it more stable than the N250. While both bikes felt agile and willing to change direction, they didn’t feel precise and needed you to be watchful to correct the line when cranked over in corners. In terms of handling the NS200 will allow you to commit more, more confidently and more often.

Back with a bang?

One thing is clear: the engine is the star of the package. It has big shoulders and shrugs off the city, pillion and highway duties without effort. Its grunt is pretty handy on the track too. Of the two Pulsar 250s, on the track and on the road, the F250 comes across as the more complete package as its price, looks, ergonomics and performance mark it out as the successor to the 220F, and a fitting one at that. The N250 has a tougher job as it will be compared with the cheaper NS200 and the better equipped TVS Apache RTR 200.

Despite the years of delay in the arrival of the new generation Pulsars, it feels that these are resting on the laurels of the past and not out to win any new accolades. So these are a new breed of Pulsars that won’t boast about segment-first features and benchmark-setting mechanicals to wow or thrill you.

The price tag, although sensible, does not bring a Bajaj-esque VFM equation to the segment either. So, these motorcycles toe a line that pegs them as rational rather than emotional. So, yes, the Pulsar is back, but just not how we imagined it.