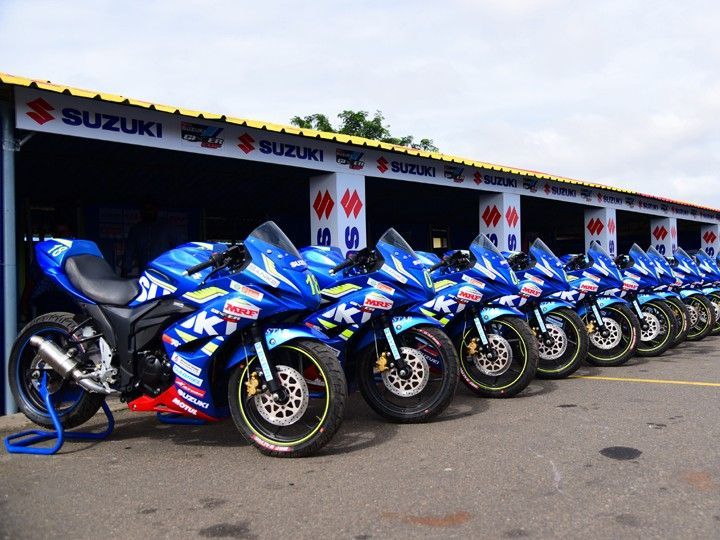 The Suzuki Gixxer is a great example of how one product can change the fortunes of a brand. Until the Gixxer was launched, there wasn’t a single bike from Suzuki’s Indian portfolio that had an aspirational factor attached to it. The Japanese two-wheeler giant has been clever in making the most of the sales boom brought about by the naked bike, and soon launched the faired version of it in the form of the Gixxer SF last year. In 2015 it also made an important announcement by launching the Gixxer Cup one make motorcycle racing series, similar to its rivals TVS and Honda. For the Gixxer Cup Suzuki had prepared a special race-spec version of the Gixxer SF. Now, for the second season the bike has undergone a slew of changes. We were invited by Suzuki to ride the new Gixxer race bike at the windy and technical Kari Motor Speedway.

Being a race-spec bike it had to undergo cosmetic updates. The headlight, mirrors, turn indicators and the rear number plate assemble have been chucked. The rear seat gets a cowl to make the bike look sporty while the Suzuki racing blue colour has been carried forward but the fairing has been filled with sponsor decals to give it that quintessential race bike look. The stock bike has an upright and comfortable riding posture but that has been revised on the race bike. The bike sports clip-on handlebars and rear-set footpegs that allow the rider to duck down neatly while blasting down the straights and maintain a sporty posture while cornering.

The switch gear and instrument console have been carried forward from the stock bike. Push the starter and the bike comes to life with a loud and throaty note from the hydroformed racing exhaust system that does complete justice to its race bike DNA. Suzuki hasn’t divulged power figures but we expect it to rise by almost 5 to 10 per cent over the stock motor. The bike gets equipped with racing air filter and carburettor re-jetting. On the move, the first thing that you will notice is how nimble the bike feels as you flick the bike from one corner to another. Handling is definitely the forte of the motorcycle as the chassis is very communicative and one just has to point the line you want to take and it follows you obediently.

The Suzuki Gixxer Cup bike also features special soft compound tyres supplied by MRF which played a key role in increasing my confidence through the chicanes. What makes the Gixxer SF race bike special is that it doesn’t intimidate the rider, and for a track novice like me it was confidence-inspiring. The Gixxer SF was recently equipped with a rear-disc brake and so does the updated race-spec model. Despite the updated braking hardware, I felt that the bite from the front disc unit wasn’t hard enough, especially while braking at the end of the straights. Another aspect of the motorcycle that I felt could have been better was healthier straight-line performance. The Suzuki Gixxer SF, in my opinion, is among the best 150cc motorcycles on sale in India and in its track-spec avatar the desirability factor goes a few notches higher.