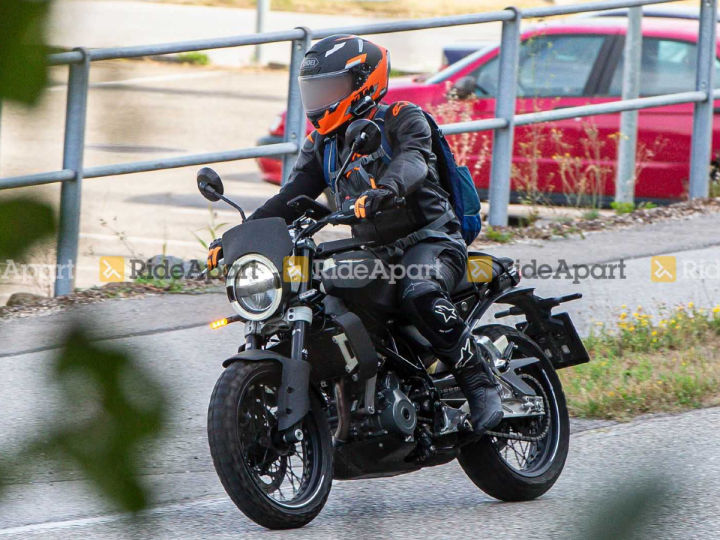 The Husqvarna Svartpilen 125 are all set to receive a major update, as multiple test mules have been spotted abroad. These spy shots give us quite some insight into what the next-generation Husky will offer, as these upgrades will most likely be applied across the Vitpilen and Svartpilen range.

Husqvarna has been hard at work on the styling front, as evident on the Svartpilen test mule’s chiseled and muscular tank. Furthermore, the single-piece trellis frame has been replaced by a split trellis frame with a sleek subframe, completely opposite to the one spotted on the upcoming KTM Duke range, presumably to accommodate the bench-type seat.

While the test mules retain the same headlight and mirrors as on the current-gen bikes, it now sports a little cowl above the headlight, seemingly inspired by the Norden 901. The rear section, however, now sports a more conventional rear fender, as opposed to the current model’s tyre hugger-like design.

Also in line with the next-gen Dukes, the Husky test bikes feature a new engine casing that is visually different from the 2023 KTM 125 Duke. While the upcoming bike is also expected to have the same performance figures as the current-gen model (14.5PS/12Nm), we hope Husqvarna improves the engine refinement on the new bike. It also gets an offset rear monoshock, similar to the ones spotted on the next-gen Dukes.

While the test bikes were seen donning spoke wheels, one bike featured alloy wheels and disc brakes, similar to the ones seen on the new KTM RC 390. These alloys should translate to sharper handling due to the reduced gyroscopic effect.

Despite all these major updates, the Svartpilen continues to retain its distinctive aesthetic. Given Husqvarna’s plummeting sales in India, it is unlikely that the Svartpilen and Vitpilen 125s will be launched in India. We do expect Husqvarna to get these upgrades onto the 200, 250 and 401 twins as well, however these bikes, too, are unlikely to fare well if launched in India.

Nevertheless, those on the lookout for a sporty 125cc bike can check out the KTM 125 Duke or KTM RC 125.