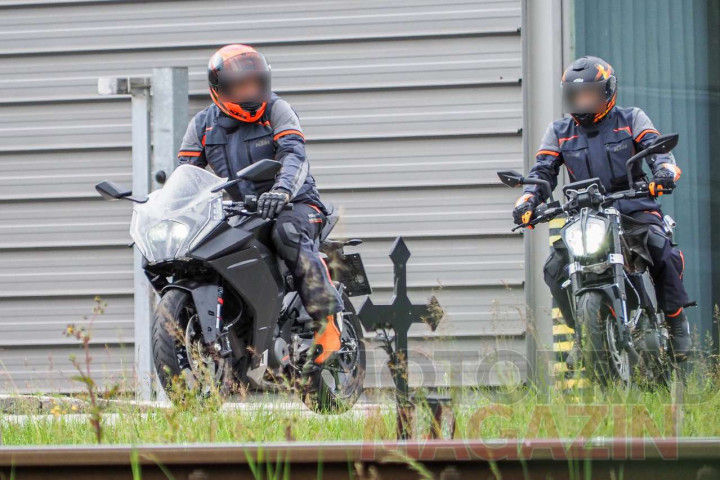 If you’re a KTM Duke fanboy, then you’ve had a lot of cause for celebration over the last few years. The 2017 390 Duke brought with it Super Duke styling along with cutting-edge features like a TFT dash and Bluetooth connectivity. The RC range on the other hand, has had to make do with just new graphics schemes and emission updates. That’s all about to change very soon though, because KTM has once again been spotted testing the 2021 RC 390, and radical changes are afoot.

The first and most obvious change is to the styling. Gone are the polarising ‘eyes’ of the current model, instead replaced by a more conventional and digestible fascia. A large LED headlight sits front and centre, giving the new bike a hint of RC8, but what really caught our eye are the very smart looking DRL strips on the edges of the front fairing. These also extend into turn indicators, meaning no ugly protrusions needed from the side fairing, and the mirrors should also be cheaper to replace in the event of a crash now that they don’t house the turn signals. The windscreen also appears to be taller and wider than on the outgoing model, and should offer superior protection at high speeds.

Aerodynamic refuge isn’t the only way the new RC will keep you more comfortable, because the seating position appears to be positively luxurious compared to the ‘butt up, wrists down’ affair on the current bike. The footpeg position in particular is far less aggressive, and the handlebars have been raised as well, placing the rider in a far more upright posture. There doesn’t appear to be quite as much of a step up to the pillion seat as before and the seat base appears to be a tad larger too, so we’re hoping KTM has addressed passenger comfort as well. On the downside, we must wave goodbye to the outgoing bike’s lovely wraparound pillion seat design.

The forward portion of the KTM signature trellis frame looks very similar to the unit we see today, though it’s possible that a few tweaks have been made. The rear subframe, though, is a completely new design and now features a bolt-on construction which will make accidental repairs cheaper and easier. The WP fork legs now stick up above the top triple clamp, while they previously sat flush, indicating that the front of the bike has been dropped and there will be a slight change in geometry. The top triple clamp itself is constructed from aluminium and is now finished in silver, lending it a premium look. Though tyre sizes are expected to remain identical, the wheels feature a spunky new 5-spoke design. What’s even sexier than the wheels is the new front brake disc, which though diametrically quite large, looks very slender thanks to some clever mounting points. Unchanged bits include the radially-mounted 4-pot ByBre caliper, braced alloy swingarm and directly mounted rear monoshock.

Right hand side switchgear seems to be unchanged, but it’s a pity that we can’t see the opposite side, because this is where we suspect big changes are afoot. Directional buttons on the left side would confirm our suspicions of a TFT dash, but for now we’ll just have to sit tight. Nevertheless, we have gotten a tiny peek at the test bike’s display and it definitely seems to be much wider than the current model’s, giving us confidence that the TFT screen is coming next year.

This being a fully-faired bike, it’s hard to get a good look at the engine, but the bottom-end of the 373cc motor seems untouched, with the clutch and alternator covers looking identical to the current bike. The exhaust system, though, is routed differently. Whether this means a change in power output or it has just been done for packaging reasons, only time will tell. The engine is already BS6-compliant in its current guise so the 2021 RC 390 will at the very least retain its current 45PS/35Nm output, if not bump it up slightly.

The answer to all the unknowns could come quite soon, because we expect the updated bike to officially break cover towards the end of this year. The original RC was first unveiled at EICMA 2013 and it’s quite likely that the 2021 version could be set free at this year’s edition, provided it happens. And for once, we in India could be among the lucky few countries to receive the bike first, maybe sometime early next year. The Apache RR 310 has only just managed to put itself in the same league as the RC recently, but with this heavily updated bike just around the corner, the boffins at TVS have no time to rest. RC fanboys rejoice!