Just how different is the Thunderbird replacement going to be? 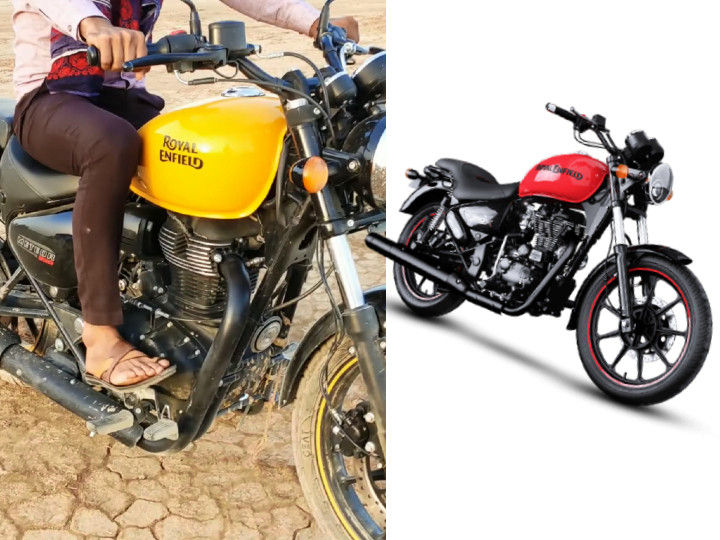 Royal Enfield working on its next generation of single-cylinder thumpers is no secret. Called the J-platform, the new bikes were expected to replace the existing UCE models. However, that wasn’t the case as the Classic 350 and the Bullet 350 received their BS6 updates. The Thunderbird 350 series though, didn’t. Why? Perhaps, the T’bird name is going to be dropped for a new model, called the Meteor.

This isn’t the first instance of the Eicher-owned brand looking back to its British roots to name its new motorcycle. It did so with the Continental GT 535 in 2013 and with the Interceptor 650 in 2018. Enfield had trademarked the name ‘Meteor’ last year and the bike has finally been spotted in the flesh. So, just how different is the Meteor 350 from the Thunderbird 350X?

Styling
From a distance, the two bikes might look quite similar. From the alloys and the tank to the side panels and even the fenders are pretty much the same. So what’s changed? From what we can spot currently, the headlight. It is no longer running the projector headlight setup as the Thunderbird, making way for a more conventional bulb-type setup. The external chrome bezel remains intact but internally there is a black bezel too. The Meteor 350 is running a split seat setup. There seems to be no change to the seat profile or seat height but we shall confirm the same once we get further details of the bike.

Instrumentation And Switches
The two bikes still run a dual-pod info cluster but the one on the Meteor seems to be asymmetric. We guess the smaller pod is the tachometer with the larger roundel consisting of a digital inset, analogue speedometer, and a few tell-tale lights. The digital inset could very well be from the Interceptor 650, displaying just the odometer and two trip meters. However, we wish Enfield includes a distance-to-empty indicator and a gear position indicator.

The switches are all-new, bearing no resemblance to any of the ones used on Enfields that are currently on sale. However, travel back to 2018 when the Concept KX was showcased at EICMA with similar switches. These round switches draw inspiration from the recoil-type switches on old-school British bikes.

New Chassis
The Thunderbird made use of a single-downtube frame. But Enfield seems to have ditched that for a double cradle chassis for the Meteor 350. We expect Enfield’s performance partner, Harris Performance, to have played a part in the development of the new chassis, just like it did with the Continental GT and the Interceptor. What we could also expect to see on the new Meteor 350 is brand new engine mounts to isolate the excess vibrations that a big-bore single-cylinder motor is known to produce.

Modern-ish Engine
As soulful as the 346cc UCE motor is, it lacks punch. In light of recent competition from the Jawa Forty Two and the Benelli Imperiale 400, the UCE motor does run out of breath fairly quickly. The new motor on the Meteor 350 is expected to change that. Firstly, it is no longer running a push-rod setup for an overhead cam. The engine casing is quite similar to the Interceptor 650 and could perhaps employ a counterbalancer to suppress vibrations. A six-speed transmission would improve its highway credentials but Enfield may just stick to a five-speeder to save costs. It might just get a slip-and-assist clutch to reduce clutch lever effort.