Royal Enfield Is Ready To Drop A Meteor

Production-ready bike has been spotted 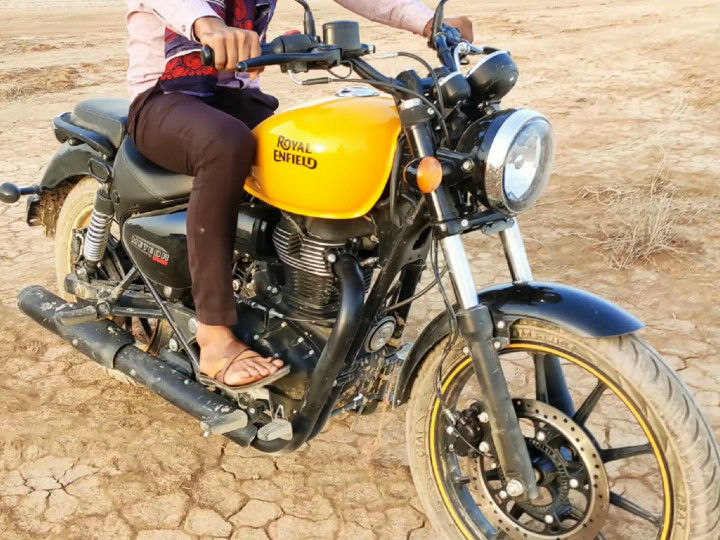 Rumours of the Royal Enfield Meteor being the next big launch from the iconic bikemaker after the Interceptor 650 and the Continental GT 650 have been doing the rounds for the past few months. Now, those rumours can be laid to rest as the upcoming Meteor has been spotted in the flesh during a commercial being shot. The new Royal Enfield Meteor will be replacing the Thunderbird 350X and the main reason for the new identity could be due to the fact that the Thunderbird is trademarked in foreign markets. In fact, the Thunderbird is sold as the Rumbler in certain markets (Australia and New Zealand).

The most intriguing aspect about the new Royal Enfield bike is that it features a double cradle chassis and a new motor. This could be the first motorcycle to be launched under the J-platform and the new frame should help improve the handling characteristics of the cruiser bike. While we don’t have much clarity of the new engine, it’s likely that the RE Meteor is powered by an all-new air-cooled and fuel-injected motor with a displacement of around 350cc.

From the image we can make out that the head and the engine case is completely different and unlike the UCE engine, there is no external catcon visible. The Thunderbird 350’s motor churned out 19.8PS and 28Nm of torque. Going by our experience with the new 650 Twins, we are hoping the new Royal Enfield Meteor’s engine will churn out more torque and will be more refined. To improve its highway dynamics, the new motorcycle could do with a 6-speed gearbox as well.

On the design front, the Meteor carries forward the styling of the Thunderbird 350X and continues to sport bright colour as seen in the spy pic. What has changed though is the instrument console, which could have more info in display and it might employ old-school rotary-style switches for the kill switch and headlight.

While the frame is all-new, suspension duties remain similar to the Thunderbird 350X and consists of telescopic fork and twin shocks absorbers. Anchorage will be offered by disc brakes on either end with dual-channel ABS being standard. Given the current coronavirus situation, the RE Meteor launch could be delayed by at least a few months. As for pricing we expect the Royal Enfield Meteor to retail around Rs 1.75 to Rs 1.85 lakh (ex-showroom). While the Thunderbird was always overshadowed by the Classic 350, can the new Meteor bring about a change is something we will have to wait and watch.