With so many Royal Enfields being spotted these days, it can be tough to keep track of what’s what. Allow us to help 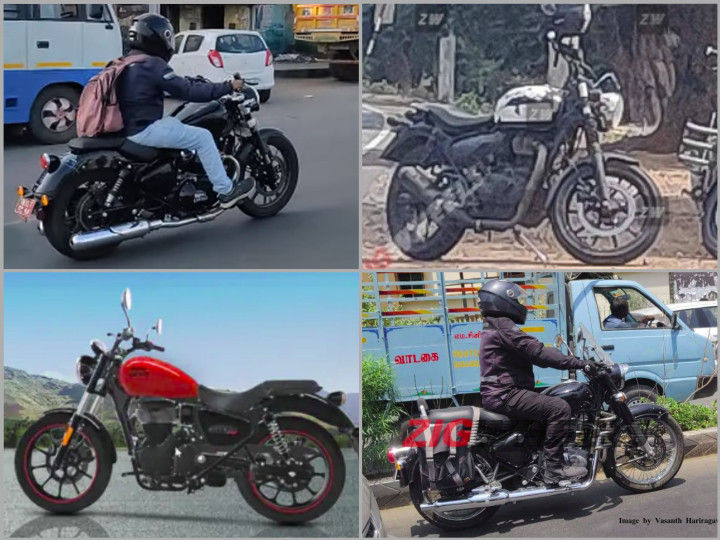 The maker of the iconic Bullet is all set to go guns blazing in the near future with multiple motorcycle launches. In fact, most of Royal Enfield’s upcoming bikes have already been spotted testing. Here’s our analysis of the features, pricing and other details of all these motorcycles.

Royal Enfield will kick-start its new chapter with the Meteor 350, that’s scheduled to be launched this month. It will be the first motorcycle to be launched under the all-new J platform. The bike packs a completely new powertrain and the gearbox casing looks similar to the one on the 650 twins. So we wouldn’t be surprised if it comes with a 6-speed transmission. The engine is also expected to be a lot more refined than before. It also packs an all-new double cradle frame with new front and rear discs. While the front gets the same telescopic fork, the rear uses conventional shock absorbers as opposed to the twin gas-charged setup on its predecessor.

Other notable features include a twin-pod semi-digital instrument cluster with bluetooth connectivity and turn-by-turn navigation, a first for Royal Enfield. It also gets unique retro dials to control the headlamp beam and engine kill function instead of the conventional switchgear. The bike is also likely to get a whole range of accessories to make it even more versatile. Going by the leaked brochure, Royal Enfield will offer the motorcycle in three variants and the prices are expected to start from around Rs 1.60 lakh (ex-showroom).

The 2021 Royal Enfield Classic 350 has been spotted testing quite a few times now. It retains the distinctive retro styling albeit with minor tweaks. The recently captured spy shots reveal two possible variants for the motorcycle: rear drum and rear disc. This bike shares the same powertrain, frame and suspension bits with the Meteor 350. While it uses the same switchgear as the cruiser, the instrument cluster in this motorcycle is a single-pod unit with a small digital inset.

Expect the starting price of the new-gen Classic 350 to be slightly lower than the Meteor 350. It is likely to replace the existing BS6-compliant Classic 350. This would make perfect sense as apart from the cleaner engine, the BS6-compliant version doesn’t offer any other tangible features to justify its 13,000 rupee price premium over the BS4-compliant model. Expect Royal Enfield to launch the new-generation Classic in early 2021.

Going by the spy shots, the Royal Enfield Hunter looks a lot like the Triumph Street Twin. It was initially thought to be the Roadster, but with the recently-spotted 650cc cruiser in the picture, the ‘Roadster’ moniker will likely be given to the cruiser. Whereas the Street Twin-like motorcycle is likely to be named the Hunter. Royal Enfield had trademarked the Hunter moniker back in December 2019.

It comes with a much modern naked bike-like styling, slightly sporty ergonomics and an upswept exhaust. To keep the costs low, the bikemaker has equipped this motorcycle with the same powertrain and underpinnings as the Meteor 350 and the Classic 350. Expect Royal Enfield to launch this motorcycle in mid-2021. This will be the sportiest motorcycle under the brand’s sub-500cc range, and you can read more about it here.

The Royal Enfield Roadster 650 was spotted testing for the first time very recently. It comes with a new frame derived from the 650 twins’ double cradle unit. The rear section of the frame is awfully similar to the Classic 350. More importantly, the test mule featured inverted fork - a first for a production Royal Enfield. This clearly hints at the bike’s premium quotient.

The powertrain looks similar to the existing 650 twins, but the rear comes with a pair of conventional shock absorbers instead of the gas-charged ones in the 650 twins. Royal Enfield seems to have equipped the bike with new discs too, and the one at the rear looks almost as large as the one up front. Expect the Roadster 650 to be priced at around Rs 3.50 lakh (ex-showroom), making it a more premium alternative to the Interceptor 650 and the Continental GT 650. Like the Hunter, expect the Roadster 650’s launch in mid-2021.

Along with the Hunter name, Royal Enfield had trademarked the Sherpa too. In December 2019, there were strong rumours of Royal Enfield planning to make a lighter and more affordable 250cc motorcycle, especially for beginner riders. It is quite possible that Royal Enfield might name this motorcycle the Sherpa.

It could have a Bullet-like styling, which would play an important role in the familiarity factor. The motorcycle could also come with some mild off-road credentials to justify its name. We haven’t seen the test mule of this motorcycle yet, so it is safe to assume it is still a long time away from launch. Fingers crossed, we hope to see the bike in mid-2022. It will be Royal Enfield’s most affordable motorcycle, thus granting an avenue for a lot of budget-conscious enthusiasts into the Royal Enfield lifestyle.