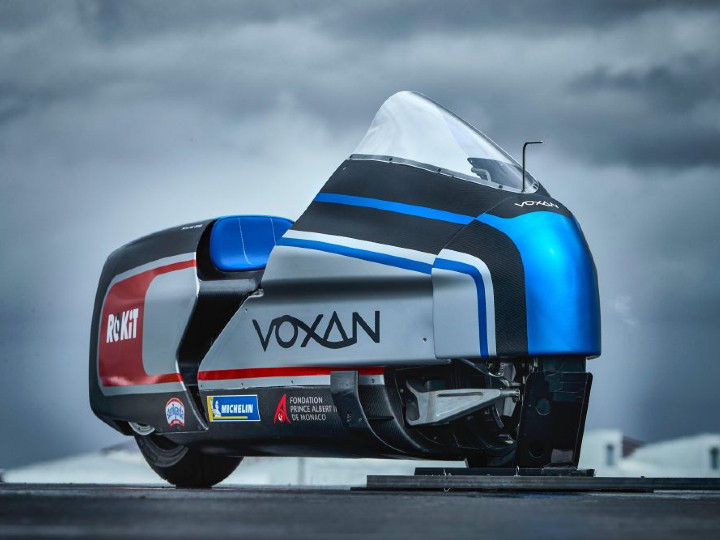 French bikemaker Voxan has pulled the wraps off its Wattman electric cruiser and electric streamliner. The upcoming motorcycle will rival the likes of the Harley-Davidson LiveWire and to accomplish that, it comes with a lot of firepower. The electric bikemaker has also revealed a special streamliner based on the Wattman. It features a highly modified electric motor that comes with a special dry ice cooling system and delivers a staggering 317kW. It will attempt to break the previous electric motorcycle land speed record of 327kmph in July next year.

Also read: This Electric Monowheel Is Set To Be The World’s Fastest

The production version comes with a liquid-cooled permanent magnet motor. It delivers 150kW of peak power between 7500rpm and 10,500rpm and 200Nm of peak torque between 0rpm and 6000rpm. It claims to accelerate from 0-100kmph in 3.4 seconds and has a top speed of 170kmph. It gets electronic rider aids like multiple ride modes, traction control and ABS.

To have enough juice for the record run, Voxan built a special battery pack with the help of Ohio State University. Its 1,470-cell battery pack weighs a whopping 140kg and has a capacity of 15.9kWh.

The road going Wattman gets a 12.8kWh lithium-ion battery pack that offers a range of 180km. Voxan claims the battery pack can charge up to 80 per cent in under 30 minutes using a level-two fast charger. It can also be charged using a conventional home socket.

The streamliner gets a hub-mounted wishbone steering mechanism with no brakes in the front end. This is done to give the bike better aerodynamic stability. It gets special Michelin Pilot RS+ that are rated for 217mph (350kmh). Another interesting aspect of the Voxan Wattman is that instead of a conventional frame it gets an aluminium exoskeleton that also holds the battery pack and frame. It gets 43mm upside-down forks and dual preload-adjustable shock absorbers. The Wattman electric cruiser weighs a hefty 350kg and gets special braking in the form of Beringer 4D four 230mm front discs with 4-piston calipers and a 230mm Beringer disc.

Also read: This e-Bike Can Behave Like Any Petrol-powered Bike You Want

The Voxan streamliner had plans to break the speed record this month but due to a series of delays, that plan has been pushed to next year. If everything goes according to plan, we may see the French set a new electric motorcycle land speed record and just in time for the production bike to be launched.