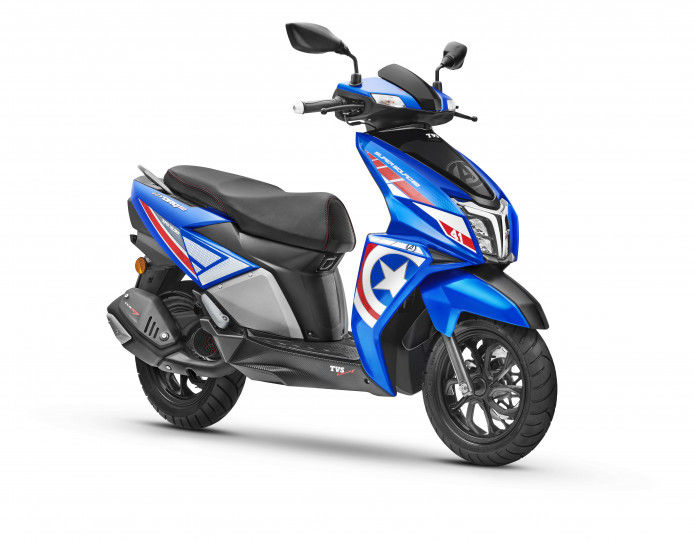 TVS has launched the new NTorq 125 SuperSquad Edition in India at Rs 77,965 (ex-showroom Delhi), Rs 2,500 more than the top spec NTorq 125 Race Edition. The new SuperSquad Edition is designed in collaboration with Marvel Studios and is inspired by the Avengers franchise. The updates are purely cosmetic and are limited to a new paint job and graphics. It also gets a customised UI on the TVS SmartXonnect app.

The NTorq 125 SuperSquad edition uses the NTorq Race edition as the base and is available in three colour variants: Combat Blue, Invincible Red and Stealth Black. Each colour signifies a Marvel superhero. The Combat Blue livery is inspired by Captain America. Besides the blue livery and shield on the front apron, it has the number 41 sticker. This denotes the year (1941) when Captain America was introduced.

Invincible Red is inspired by Iron Man and gets a red paint job with the Iron Man helmet on the front apron. It gets two easter eggs on the bodywork. One is the ‘Mark XXIV’ sticker which denotes Iron Man’s 29th suit, also known as the ‘Fiddler.’ It also gets the number 63 sticker, for the year (1963) when Iron Man was first introduced to Marvel fans.

Stealth Black is inspired by Black Panther. It gets a black paintjob with white and purple livery. The Black Panther mask sits on the front apron and easter eggs are present in the form of ‘Wakanda Forever’, a salutation used in the franchise, stickers; and the number 66, the year (1966) Black Panther character was introduced. All three scooters get the Avengers logo on the front apron.

Apart from these cosmetic updates, there are no feature, powertrain or underpinning updates. The new SuperSquad edition scooters look striking and will find favour among the younger crowd and Marvel fans.