Will the TVS NTorq’s new performance gain give it an edge over its rivals? 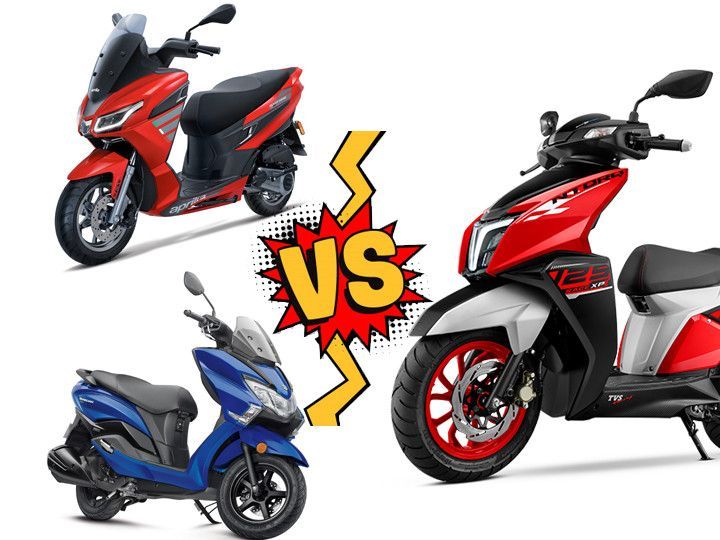 TVS dropped a massive update on the NTorq 125 just yesterday. Coined as the ‘Race XP’ the scooter now offers better performance, improved features and a new sporty livery to keep things interesting. Livery aside, the updates should give the NTorq an edge over its rivals. Here’s how everything plays out as per the specs.

The 0.8PS and 0.3Nm bump in performance now puts the NTorq comfortably ahead of both the Burgman (second fastest scooter as per our tests) and the SXR 125. In theory, the performance improvement should work in the NTorq’s favour, however, you also need to consider that it’s a whole 8kg heavier than the Burgman.

Our earlier mega scooter comparison had the Suzuki topping the performance charts. The Burgman took 8.27 seconds to complete 0-60kmph while the NTorq did it in 9.26 seconds. That’s a massive gap if you ask us. But TVS should be able to narrow it down to a great extent, if not surpass it, with the Race XP.

As for the SXR 125, it trumps the Burgman in terms of power. However, its lower torque output means it takes longer to get off the line. The fact that it makes its power higher up the rev range indicates that it may take longer to achieve its top speed.

All three scooters are pretty similarly equipped. The only difference, so to speak, are the fatter tyres on the NTorq and the SXR which offer better stability.

Also worth mentioning are the brakes on the SXR 125, which have proven time and again to be the best in the segment.

The NTorq may have the second longest wheelbase but its excellent weight distribution makes it one of the best handling scooters in its segment.

The Burgman's skinny tyres and shorter wheelbase helps it to tip into corners surprisingly quickly. So much so that it was the quickest scooter to complete our timed circuit run last time around. Not something you’d expect from a maxi-style scooter. The NTorq, on the other hand, came in a close second. Read more about it here.

The chunkier tyres on the SXR and the longer wheelbase may make it a bit lazier to turn into corners.

The NTorq takes to win here, no questions asked. It was and still is the most feature-packed scooter in its segment. The addition of ride modes (Race and Street) help riders make the most of the extra performance and reach a top speed of 98kmph, according to the manufacturer.  It also gets voice-assisted features built into the app, which is a first in its segment. New features explained here.

The Burgman too has been updated with a Bluetooth-enabled digital console with several new features. However, it isn’t nearly as comprehensive as the one on the NTorq.

The SXR isn't short on features either. It gets a full digital instrument console with readouts such as average fuel consumption, range, overall fuel efficiency, ambient temperature, max speed clocked, two trip meters, tachometer, engine oil temperature, and battery voltage. All of which can be toggled through a mode button on the right-hand-side switchgear.

At Rs 83,275, the TVS NTorq is the cheapest scooter of the lot, and the most feature-packed. Not to mention it’s likely to put up a strong fight now thanks to the performance gains. By far the best value for money proposition in its segment.

But if you're looking for a scooter that’s practical, comfortable and quick at the same time, the Burgman makes a lot of sense.

Youthful, sporty and trendy are words that perfectly define the SXR 125. It’s fun to run but may not impress everyone especially when you consider its premium price tag.