Top 5 Electric Scooters That Can Replace Your Petrol Scooter

With manufacturers and start-ups flooding the electric scooter market in India, we pick the top 5 that are truly worth owning and riding on a daily basis 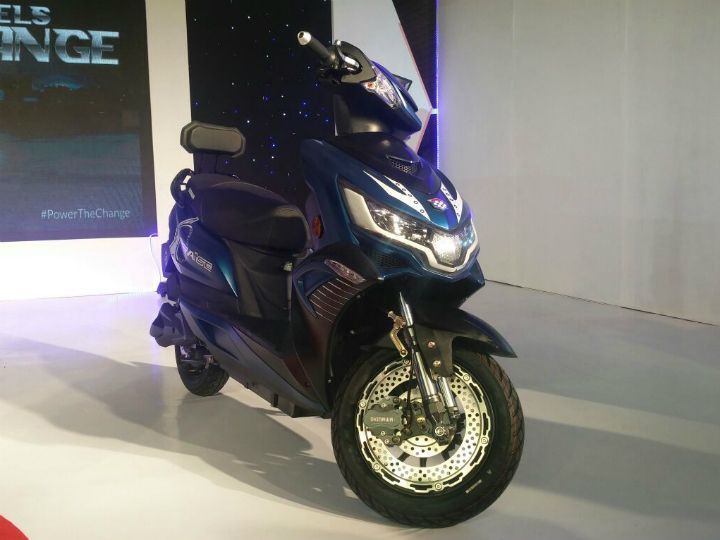 Okinawa is a Rajasthan-based electric two-wheeler manufacturer with two offerings in its lineup. Priced at Rs 59,899 (ex-showroom Delhi), the Praise was its second product after the Ridge. You can book the Praise for Rs 2,000 at any of the brand's 200 outlets spread across 22 states and 142 cities.

The Praise looks unlike any other scooter on sale in India. It features a wide V-shaped LED headlamp with LED DRLs. Other features include a side-stand indicator, an anti-theft sensor, keyless entry, ‘Find My Scooter’ function, an all-digital instrument console and more. The Okinawa Praise also comes equipped with three different riding modes - Economy, Sport and Turbo.

It is powered by a brushless DC motor which can be powered by either a lead acid battery or a lithium-ion one. While the lead acid battery takes upto 6-8 hours for a full charge, the lithium-ion battery can be fully charged within an hour. The motor is claimed to deliver 3.4PS of power and a torque of 18-40Nm. The scooter comes with three riding modes - Economy – 35kmph, Sport – 60kmph and Turbo – 75kmph. Based on which the range differs from 170-200km, which is the best amongst the lot here. Also, as per the company's claims, 75kmph (Turbo mode) is the top speed the e-scooter can achieve.

The Praise gets gas-charged telescopic forks at the front and dual shock absorbers at the rear. Okinawa has equipped the Praise with double disc brakes at the front, a first for any scooter sold in India, and a single disc at the rear. It has a saddle height of 774mm and gets 12-inch wheels with 90/90 cross-section tubeless tyres. The Praise comes with a load carrying capacity of 150kg and a class-leading ground clearance of 170mm.

Prices for the Hero Electric Photon start from Rs 52,790 (ex-showroom Delhi). It comes with two battery options - Lithium-ion and AGM VRLA. The Photon Li has a top speed of 45kmph and can manage 65km in Power mode and 85km in Economy mode. In addition, the motor boasts of a peak power of 1500W, a multi-stage heavy duty charger that regulates the charge depending on the battery condition and an electronic controller for optimum torque delivery. It also boasts of telescopic suspension up front and a monoshock at the rear with a disc brake mounted on the front 10-inch wheel. Other features include an anti-theft alarm and two modes - Power and Economy. With a dealer network spread across 35 states backed by a brand name like Hero, the Photon Li offers a strong proposition, despite missing out on some of the features seen on the rivals here.

The Hero Electric Nyx E5 is priced at Rs 55,490 (ex-showroom Delhi) and is powered by a 250W BDLC motor that is integrated with the rear wheel which draws power from a lithium-ion battery. The e-scooter offers a range of 60km on full charge with a charging time of 4 hours. It can clock a top speed of just 25kmph. The NYX comes with an anti-theft alarm, two-year warranty and free one-year roadside assistance plan from the manufacturer. It’s designed with more focus on functionality than styling, to offer lots of space. While the front end looks similar to small entry-level scooters, the long wheelbase makes for a rather unconventional design.

It sports a split-seat setup instead of a one-piece unit that we’re used to seeing on scooters. Moreover, the pillion seat can be taken off to stack up luggage behind the rider. This reaffirms that the Nyx is designed to do a lot more than just commute, unlike any other scooter in the list.

Ather Energy has finally confirmed the launch of the S340, after delaying it for over a year now. Bookings for the scooter are set to begin in June. However, initially, the company plans to sell it in Bengaluru only, before eventually expanding to the rest of the country, later this year.

The S340 gets a 2.2kWh Li-ion battery that has a life of 50,000km. It can be charged to 80 per cent in just 1 hour with fast charging. The company claims a range of 60km on a full charge. The company claims that the S340 achieve a top speed of 72kmph. Speaking of performance, it can do a 0-40kmph sprint in 5.1 seconds as per the company’s claims. Its peak power output is 6.8PS, while peak torque output stands at 14 Nm.

Ather has equipped the S340 with telescopic front forks and a monoshock at the rear. Braking is courtesy disc brakes at both ends with CBS on offer as well. Also, the S340 rides on high-tensile steel alloy wheels.

Besides launching the scooter, the company is also setting up 30 charging stations across Bengaluru that are expected to go live by the end of May 2018. The company plans to increase this count to 60 by the end of 2018. Ather Energy further claims that this will translate to a charging point 4km away from any point in the city. So with a range of 60km on full charge, commuting in the city shouldn’t be a problem.

The company is also going to start a customer experience centre in Indira Nagar, Bengaluru, for potential buyers to test the electric scooter. Even though there’s no word on the pricing yet, we’d place our bets on a ballpark figure of Rs 75,000, given the plethora of features on offer.

Twenty Two Motors is also a startup that launched its first ever electric scooter, the Flow, at the Auto Expo 2018. Bookings for the Twenty Two Flow are currently on hold as the company is still working on delivering previous orders. But bookings should begin again soon. Speaking of bookings, the electric scooter can only be purchased online and there is no particular showroom to take a test ride before buying. Priced at Rs 74,740 (ex-showroom Delhi), the Flow is the costliest of the lot here, but it does get a host of segment-first features.

For instance, there’s a geofencing feature to remotely track the vehicle. It is also connected to the company’s cloud-based system and can be linked to a smartphone as well. This lets one disconnect the power supply via a mobile app, in case of theft.

The scooter also gets riding modes, designed to provide optimum performance out of the battery and electric motor. The Flow is powered by a DC motor that produces 2.8PS of peak power and 90Nm of torque at just 100rpm. Thanks to fast charge, the lithium-ion battery can be charged to 70 per cent in just 2 hours, while charging it to 100 per cent takes 4 hours.

That said, just a 10-minute charge gives the Flow a range of around 20km, which is enough in case of emergencies or short runs. Otherwise, on a full charge, the scooter has a range of 80km with a single battery setup and a top speed of 60kmph. The company also claims to replace the battery for free, in case of an issue.

If that wasn’t enough, the Flow also comes with Artificial Intelligence. As a result, it automatically learns and helps the user minimise breakdowns. It even sends service reminders, based on riding behaviour. The spare parts are also ordered automatically even before a failure takes place, thanks to the cloud-based analytics.

That’s not all though, the Flow also features KERS (kinetic energy recovery system) that enhances battery life by up to six per cent and Intelligent Collision Detection and Alert.

Surprisingly, the company also offers cruise control and a reverse mode for park assist. Newbies, though, should use this feature with caution as electric vehicles are high on torque and even the slightest twist of the wrist might just catapult you in the wrong direction while you’re trying to park.

Tipping the scale at just 85kg, the Flow has a ground clearance of 155mm with a load carrying capacity of 150kg, while storage capacity stands at 25 litres. On the mechanical front, it comes with a hydraulic disc brake at the front, telescopic front forks and high-tensile steel alloy wheels.