It is available in three variants: XM, XZ+ and XZ+ Lux. 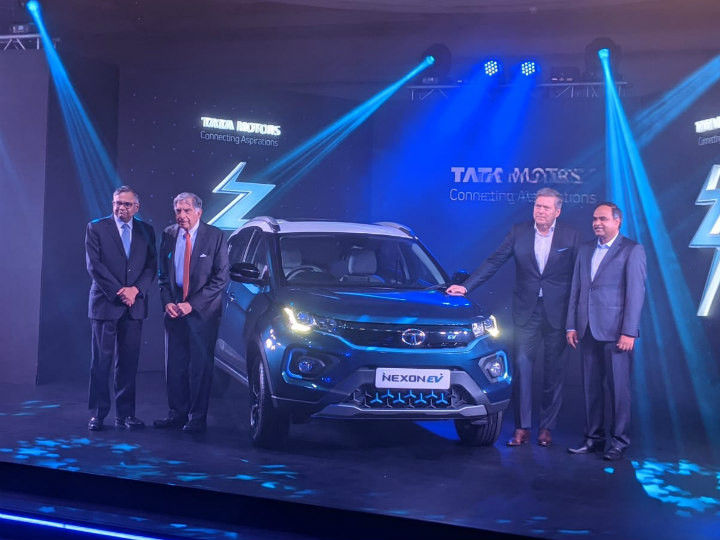 After its unveiling back in December 2019, Tata Motors has finally launched the Nexon EV in India with introductory prices ranging from Rs 13.99 lakh to Rs 15.99 lakh (ex-showroom India). This is Tata Motors’ second electric vehicle (EV) after the Tigor EV and the first sub-4m electric SUV in India. It is offered in three variants: XM, XZ+ and XZ+ Lux. It will also be offered in three body shades: Signature Teal Blue, Glacier White and Moonlight Silver.

On the outside, the Nexon EV is more butch and modern compared to its pre-facelift internal combustion engine cousin. Exterior highlights include a sleek grille, new projector headlamps with integrated LED DRLs, and a new grille. It also receives a new fog lamp housing with silver inserts on the lower bumper. Other bits consist of 8-spoke new alloy wheels and revised LED taillamps.

Going inside, the Nexon EV remains nearly identical to its standard counterpart, aside from the three-spoke steering wheel, blue air vent inserts, and digital instrument cluster. It comes with features like a 7-inch touchscreen infotainment system with Apple CarPlay and Android Auto, a sunroof, cruise control, leatherette seats, automatic headlamps, and rain-sensing wipers. It also comes equipped with ZConnect car tech for all variants, with up to 35 features.

The main talking point for the Nexon EV is under the hood. It debuts Tata’s Ziptron electric powertrain, developing 129PS of power and 245Nm juiced up by an IP67-rated 30.2kWh battery pack. All this power propels the EV from 0-100kmph in 9.9 seconds. The carmaker claims ARAI-backed range of 312km, but we’ve also done a full-range test of our own. The battery pack also supports fast charging for a 0 to 80 per cent charge in an hour.

Tata Motors is offering the Nexon EV with a standard warranty of 8-year/1,60,000km for its battery pack. For those that aren't able to buy the SUV, the carmaker is also offering subscription plans starting at 12 months with no down payment. It will be sold in 60 dealer outlets in 22 cities. While there’s still some time before its primary rival, the XUV300 Electric, shows up on Indian shores, the MG ZS EV and Hyundai Kona are its reference points for now.