There are exciting times ahead for Royal Enfield enthusiasts as the heritage bikemaker is readying for an onslaught of new bikes. The Meteor 350 is due to arrive shortly, with the next-gen Classic recently spotted doing the rounds near Oragadam (RE’s plant). While we cannot wait for these bikes, an eagle-eyed rider spotted a new cruiser with the 650 motor, igniting our curiosity further. Here’s what we could make out from the short clip.

It is very evident that the 648cc parallel-twin air-cooled engine is what’s at play here. The engine casing has a new gloss black finish. The dual exhausts do not seem to be as bulky as the ones found on the Interceptor 650 or the Continental GT 650. Plus, they aren’t upswept, keeping in tune with the cruiser vibe. Engine performance is expected to be the same as the other RE 650s as the motor is already well tuned to cruise along at triple digit speeds on the highway.

There are some heavy changes to the underpinnings of the 650 cruiser. Firstly, the downtube section of the frame might remain the same but the steering column as well as the upper tube might see some modifications. The subframe is quite new, with new mounting points for the twin shocks. It is running with a new beefy USD fork, the first for a Royal Enfield motorcycle. The twin shocks, though, aren’t gas charged and might just be less fancier than the Interceptor’s. Even in terms of braking hardware, this cruiser might get a front radial caliper although it is quite difficult to make that out in this ultra short clip. The rear disc also seems larger than the Interceptor’s. Alloy rims seem to be standard fitment, with a different spoke design than the ones offered in Royal Enfield’s GMA catalogue for other REs.

You will no longer face the problem of your shins banging against the rider footpeg on this cruiser as they are fairly forward set. It seems to be running with beach bars and we think the seating is going to be a more spacious and enjoyable affair, both for the rider and the pillion. 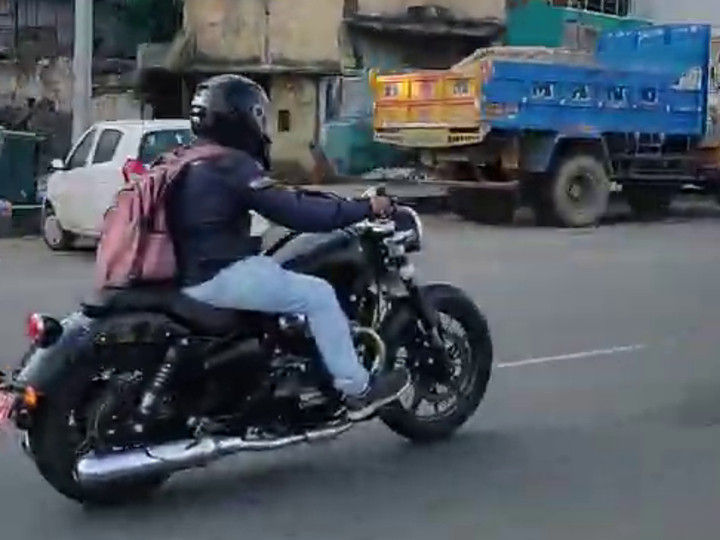 As far as the naming goes, we think Royal Enfield might just end up calling it the Roadster, maybe with a “650” suffix thrown in. We have seen the “Roadster” name being used on a Harley-Davidson, though that was a 1200cc cruiser. The RE bike fits the roadster vibe.

The pricing is expected to be on the more premium side compared to its other P platform bikes. The Continental GT 650 currently retails for Rs 2.80 lakh for the simpler colours. The Roadster 650 might not be the all-rounder kind of bike like the Interceptor 650 is. This will definitely be the new flagship product as Royal Enfield would be entering a new segment altogether. A sticker price of Rs 3.10 lakh (ex-showroom) would work incredibly in its favour, undercutting the Harley-Davidson Street 750 by a sizeable amount.