The motorcycle was recently spotted testing for the first time 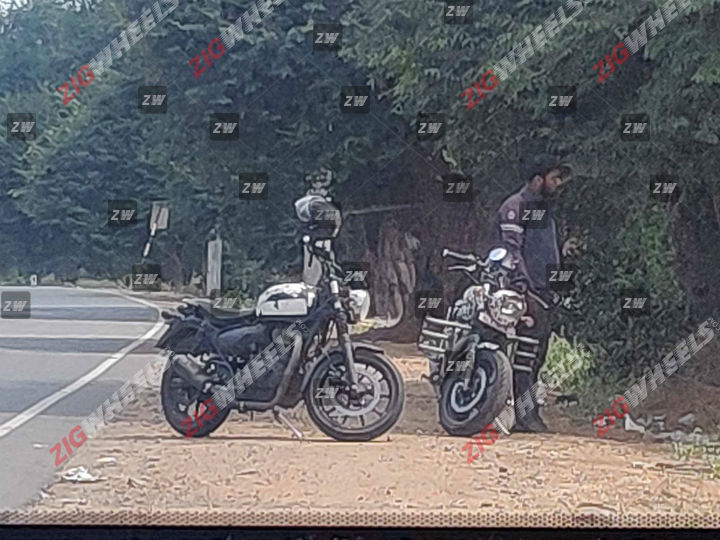 We’ve seen multiple spy shots of both the next-generation Classic 350 and the Thunderbird 350X for many months now. However, it seems like Royal Enfield has another trick up its sleeve as a new roadster-styled motorcycle has been spotted testing. Here’s what we can expect from it.

The roadster-style Royal Enfield is likely to be unveiled at this year’s EICMA and launched a few months later. Expect Royal Enfield to price the bike around Rs 1.70 lakh ex-showroom. It will go head-to-head against the Jawa Forty Two. Another notable competitor in its segment will be the upcoming sub-Rs 2 lakh Bajaj-Triumph motorcycle(s).

Did someone say Triumph Street Twin?

The test mule is unlike any Royal Enfield we’ve ever seen so far. It comes with a characteristic roadster design with flat, wide handlebars, circular headlamp, flat fuel tank, and a single-piece seat. You could even mistake it for the Triumph Street Twin, albeit with a smaller motor, in a fleeting glance.

But on a more serious note, it seems to have taken quite a few design cues from the upcoming new-gen and the current-gen Royal Enfield Thunderbird range. The tail lamp and indicators, for example, have been taken from the Thunderbird 350/500’s parts bin. It’s unclear whether the headlamp is a halogen or a projector unit like the current Thunderbird. Interestingly, the bike gets a single-pod instrument cluster, which looks similar to the one in the upcoming cruiser. The triangular side panels also appear to be a derivation of the ones on the next-gen Thunderbird. At the rear, the short fender is complemented by a reasonably meaty-looking tyre and a new upswept, stubby exhaust.

The overall riding position is likely to be pretty upright and it could be comfortable on both city commutes and highway runs. We hope Royal Enfield offers good cushioning on the seat unlike the substandard one on the Interceptor 650.

Going by the spy shots, it is pretty evident that the powertrain and underpinnings are similar to the next-gen Classic/Thunderbird. This all-new powerplant features a gearbox casing that looks eerily similar to the one on the Royal Enfield 650 twins. The engine could be mated to a 6-speed transmission. This would greatly enhance the motorcycle’s highway cruising capability -- something the current Classic 350 sorely lacks. Expect the new motor to make more power and torque than the current 346cc BS6-compliant fuel-injected motor, which produces 19.3PS at 5250rpm and 28Nm at 4000rpm, linked to a 5-speed transmission.

The underpinnings in the test mule are pretty no-nonsense. It gets a telescopic front fork and a pair of shock absorbers at the rear. There’s a disc on both ends, with dual-channel ABS likely to be offered as standard. The bike rides on alloy wheels, so it’s obvious that it will have tubeless tyres on both ends.

What will it be called?

Royal Enfield has already trademarked the names ‘Sherpa’ and ‘Hunter’. However, both these names sound too adventurous. Interestingly, Royal Enfield also applied to trademark the name ‘Roadster’ in Europe. It has been filed under both motorcycle and clothing categories, suggesting the brand could also introduce apparel to match the motorcycle. However, this trademark application is still under examination. We hope it gets approved to do justice to the bike’s demeanour.