Could This Brutale Be The KTM 390 Duke Slayer? 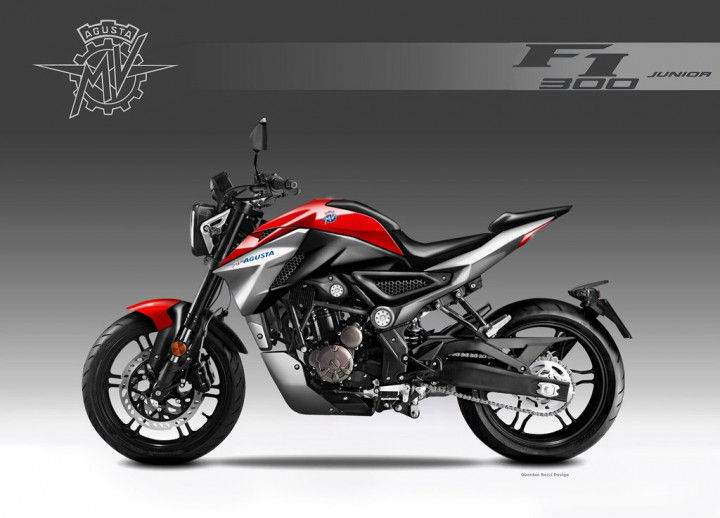 MV Agusta has been prepping up to cater to a larger audience for quite some time now. The Italian premium bikemaker recognised the impact the KTM 390 Duke made in developing markets like India and South East Asia. Its tie-up with Loncin is on the right path and we are just salivating at the prospect of a sub-500cc Agusta. And if it looks anything close to what Oberdan Bezzi has designed, it will be a stunner.

Bezzi is quite a famous Italian designer and has given his take on many prospective models in the past. His latest creation, the MV Agusta F1 300 Junior, gives us a glimpse of what the small-capacity Brutale could look like. If we had to be honest, it has a little bit of Honda CB300R in it, especially the round headlamp and to a small extent, the cuts on the fuel tank. It does show off its exotic side with the subframe mounting and the integrated tail lamp. The mounting of the tyre-hugger is also quite nicely done, rather than being overdesigned like many bikes that we have seen in recent times.

FUN FACT: Last 500cc Four-Stroke MotoGP Champion Rode A MV Agusta
MV Agusta was the most celebrated manufacturer in the 1960s motorcycle racing scene. If you were riding any of Count Agusta’s motorcycles, you were sure to etch your name in the history books. Legends like John Surtees, Mike Hailwood, Phil Read and the most successful rider in MotoGP history, Giacomo Agostini, made their name riding the 350 and 500 Agustas. But by the mid-1970s, the Japanese two-stroke marvels from Yamaha and Suzuki had run the knells for the four-stroke Agusta. Ultimately, in 1974, Agusta won its final championship in the premier class with Phil Read. Its last win in the 350cc class (which at that time held equal prominence) came a year earlier with Agostini.

The design shows the bike packing some top drawer kit like USD fork, link-type monoshock and a cast swingarm unit. The rim design is very Agusta but it is interesting that Bezzi thought that the Brutale would not get a front radial brake caliper. We still think the actual bike will get the fancy braking hardware.

Agusta chief, Timur Sardarov, has stated that Agusta was looking at building a parallel-twin engine that would displace somewhere between 350cc and 500cc. Bezzi’s design might have to be tweaked a bit but that shouldn’t be that much of a problem.

Considering that KTM is also working on a 500cc parallel-twin platform (more details on the 490 series here), the future does look a lot promising. The KTMs will be made in India at the Chakan plant and will be priced extremely competitively. The Agustas will arrive in India via the CKD route and will be a more premium alternative. One thing is for sure, both motorcycles will be power-packed. Which one of these two -- the small Brutale or the 490 Duke -- are you more excited about? Let us know in the comments below.