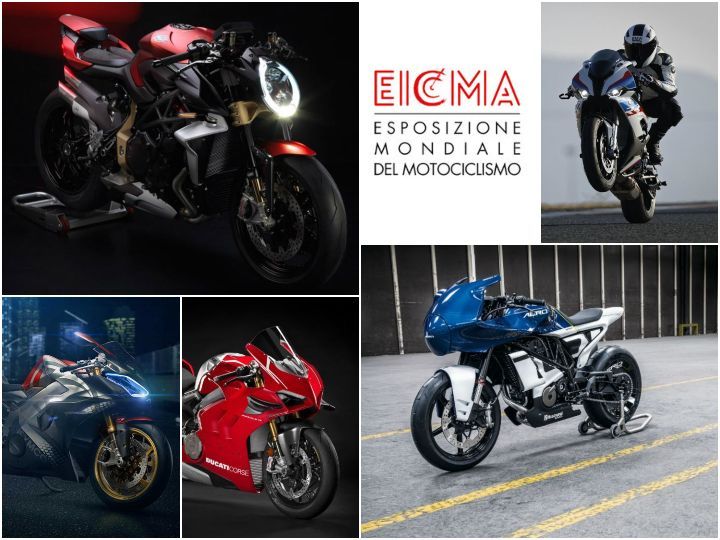 The EICMA motorcycle show is like Christmas come early for two-wheeler enthusiasts. Held in November, it is arguably the most important motorcycle show of the year, and sees the biggest automakers unveil and launch upcoming products and concepts here. The show is packed with new motorcycles and scooters but there are always ones that manage to stand out from the crowd. As we look forward to the upcoming EICMA motorcycle show, we look back at the top 5 showstoppers from last year’s show.

Last year, Ducati’s gorgeous Panigale V4 S got an even more exotic variant in the form of the V4 R. The R here stands for race-spec. This homologation special was made for Ducati to be able to take part in the World Superbike Championship (WSBK). The Panigale V4 got lightweight engine components and made 221PS, making it the second most powerful production motorcycle after the supercharged Kawasaki H2 (227PS). It even got a new fairing with aero winglets, which have now debuted on the 2020 Panigale V4 as well. Know more about this exotic superbike here.

BMW’s flagship superbike underwent a generation change after 10 long years. The bodywork was all-new. The motor was new. Even the frame was new. It shed 11kg and made 8PS more with a new 998cc motor that got Shift Cam, BMW’s fancy word for Variable Valve Timing. Know the entire extent of the updated here.

Moving on to naked bikes, the Brutale 1000 Series Oro was hands down the most beautiful naked out there on the show floor. And it came with the brawn to match its beauty. Its F4 RC-derived 998cc inline-four engine motor developed 210PS, making the Brutale Serie Oro the most powerful production naked at that time. MV Agusta claimed you could see 300kmph on the dash -- if you could hold on to the bike that is. Know more about this super exotic here.

It was not just production motorcycles that wooed the crowd last year. The Aero concept looks achingly gorgeous and we desperately hope Husqvarna comes out with a production version at this EICMA. Based on the Vitpilen 701, the Aero is a retro cafe racer with a racy blue and white bodywork. It gets a 692.7cc single-cylinder liquid-cooled motor which should offer the motorcycle exhilarating performance. Other than the Aero concept, know what Husqvarna was up to last year here.

The 2018 EICMA also gave us a glimpse of our electric future and it sure seems, er... electrifying. Case in point the Kymco electric superbike concept. Called the SuperNEX, it does look like a conventional superbike. Only that instead of a multi-cylinder race-derived motor, you will most probably hear a muted whine as it passes you by. Kymco promises superbike-rivalling performance, and a 0 to 100kmph dash in under 3 seconds. Heck, according to them, the SuperNEX will hit its top speed of 249kmph in 10.9 seconds! Know more details about this mad concept here.