The 2021 model gets revised ergonomics, a new windshield design, and a EU5-compliant heart 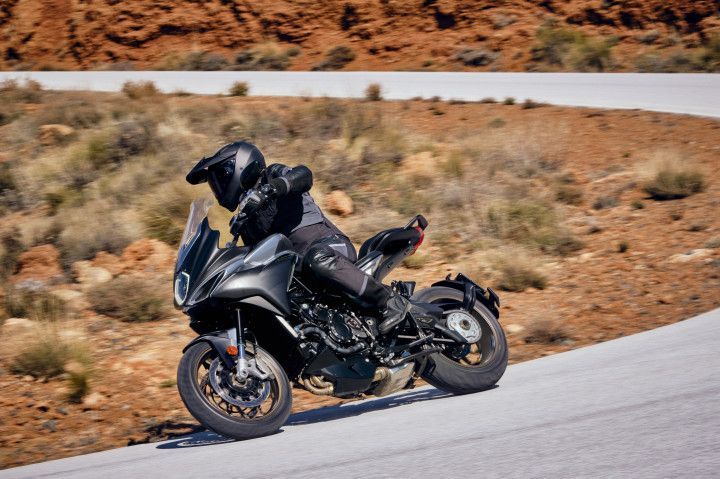 Rolling art on wheels. No other motorcycle manufacturer comes as close to emphasising this statement as MV Agusta. Famous for producing the F4 that is widely considered the most beautiful bike in the world, Agusta has been constantly churning out stunners, one after the other. Its latest 2021 lineup was refreshed, starting with the mental Brutale 800 and Dragster 800 RR, which the Italian firm followed up with the sultry neo-cafe racer: the Superveloce. Next to receive model year updates is its ADV (MV prefers calling it a sports tourer, though). Behold the new MV Agusta Turismo Veloce.

The Turismo Veloce continues to be one scintillating motorcycle. It is pure Italian exotica that forces you to sit and admire it for hours on end. Visually, you might not be able to tell the difference but MV designers have tweaked the styling of the Turismo Veloce to make air flow more efficiently around the rider.

For starters, the windshield is significantly larger now. It is 75mm taller and 38mm wider than before. While this will help reduce buffeting by a great extent, MV has also dropped the seat height by a whopping 20mm. At 830mm, it is still not as easily accessible as bikes such as the Triumph Tiger 900 GT but it certainly is more welcoming for shorter riders than before. MV also claims that thanks to the thicker and more comfy seat foam, riders will enjoy staying in the saddle for longer hours.

Despite meeting the stringent EU5 norms, the 798cc triple still pushes out 110PS and 80Nm. To achieve this, the engine internals have been revised. This includes a new intake system, low friction materials for the cylinder, new tappets with DLC coating, new valve guides, and a redesigned exhaust system. Additionally, the torque spread is better with 12 percent more torque available between 3000rpm and 6000rpm.

Even the six-speed gearbox has been updated with revised gear ratios making the power more accessible and friendlier. Updates to the electronic suites include a new bi-directional quickshifter with more sensors to make the shifting process a seamless affair, IMU-based traction control and ABS systems, and cruise control.

You can control all the parameters of the Turismo Veloce via the joystick on the left hand side with the data displayed on a new 5.5-inch colour TFT dash. The dash comes equipped with Bluetooth connectivity that enables turn-by-turn navigation, geo-fencing, and crash alert.

Lastly, MV Agusta has improved the settings of the semi-active Sachs suspension found on all variants, except the Rosso.

On the SCS models, you continue to get the triangular side bags, each with a luggage capacity of 34 litres. Finally, the RC SCS dons the Italian firm’s racing colours like always and bears the ‘Reparto Corse’ badges proudly.

The MV Agusta Turismo Veloce continues to arrive in four trims: Rosso, Lusso, Lusso SCS, and RC SCS. The primary difference between the four trims remains the aesthetics, no semi-active electronic suspension for the base Rosso, and Rekluse Smart Clutch Systems for the two range-topping trims. Prices for the Turismo Veloce start at €15,400 (almost Rs 14 lakh, without Indian taxes and duties). Sadly, there are no distributors for the Italian brand in India since its previous partnership with MotoRoyale came to an end in 2019.

The MV Agusta Turismo Veloce is one of the most thrilling and enticing ADVs in the market. While it cannot tackle soft-roading, it will do a decent enough job of going over bad roads. But we have to remember that it is essentially a F3 or a Brutale 800 on stilts and enjoys being ridden fast on tarmac. With these updates, it is more accommodating than before but we hope the craziness of the bike isn’t dialled down, cause that would be a shame.