We have tested the most popular motorcycles in this segment for their fuel efficiency in both city and on the highway. Here’s what we found 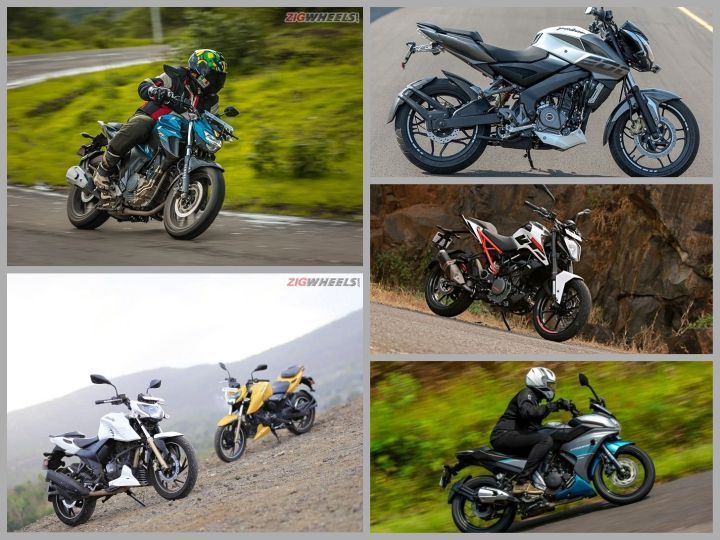 If you are a motorcycle enthusiast and don’t want to spend a bomb to satisfy your two-wheeled wanderlust, the 200-250cc segment is apt, as it offers a nice balance of affordability, fuel efficiency and low maintenance. Sure, they might not be as frugal as 150cc bikes, but they sure are packed with decent amount of performance without taking any significant hit on the fuel efficiency. Here’s a list of the most fuel efficient motorcycles in this segment that we’ve tested so far:

In our tests, TVS’ 200cc naked motorcycle, the carburetted Apache RTR 200 returned 40.2kmpl in city, and 38.4kmpl on the highway. The fuel-injected (FI) variant is understandably more efficient, at 44.1kmpl and 44.6kmpl in city and on the highway, respectively. The fuel injection technology has helped the bike maintain an impressively consistent figure despite the obvious difference in riding styles in urban and ultra-urban conditions. Its 197.75cc single-cylinder air- and oil-cooled mill churns out 20.5PS in the carb variant and 21PS in the FI version, both at 8500rpm. The two variants generate 18.1Nm of torque at 7000rpm, and are paired with a 5-speed gearbox.

When it was launched, the Bajaj Pulsar NS200 was a fresh departure from the regular Pulsars that we’d experienced till then. Not only did it get a liquid-cooled engine for the first time in the history of the Pulsar moniker, but also looked radically different from its previous generations. The BSIV model’s city efficiency stands at 36.1kmpl, while on the highway, it’s a bit more fuel efficient at 39.7kmpl. Its mileage figure is reasonable, considering its sophisticated 199.5cc single-cylinder triple-spark engine with liquid cooling. The powerplant produces 23.5PS at 9500rpm, and 18.3Nm at 8000rpm, working in conjunction with a 6-speed ‘box

Yamaha’s flagship 250cc naked motorcycle, the FZ25 is quite efficient in city, with a figure of 45.6kmpl. Interestingly, it returns 31.17kmpl out on the highway, which is far from impressive. This is down to the fact that it lacks a sixth cog and runs at slightly higher rpm at highway cruising speeds in fifth gear. The motorcycle draws power from a 249cc single-cylinder SOHC, air- and oil-cooled engine that’s equipped with fuel injection. Its peak power of 20.9PS arrives at 8000rpm, and the maximum torque of 20Nm comes in at 6000rpm.

The Fazer 25 is essentially a faired version of the FZ25. Understandably, all those aerodynamic enhancements, and we use that term a bit lightly, have marginally improved the efficiency on the highway where it returns 32.9kmpl. In city, the added weight of the fairing results in an efficiency of 41.3kmpl, which is 4.3kmpl lesser than what the FZ25 manages here. The bike uses the same 249cc single as the FZ and also makes the same power and torque figures as its naked counterpart.

The KTM 250 Duke is the most powerful motorcycle among the lot, with its 248.8cc single-cylinder, liquid-cooled, fuel-injected engine making 29.9PS and 24Nm. The motorcycle’s city efficiency of 41kmpl is commendable for a bike packing so much performance. On highways, the (relatively) refined motor, which is paired to a 6-speed gearbox with a slipper clutch, returned 35.66kmpl - again, a figure that’s surely impressive for this motorcycle.

These motorcycles may not have an obscene amount of power, but will surely provide more smiles per mile, thanks to their affordable running costs.